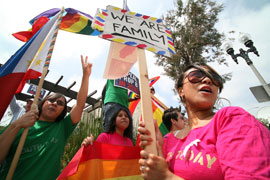 Supporters of same-sex marriage rally in May 2009 outside the East Los Angeles Recorder Office after the California Supreme Court ruling to uphold Proposition 8. (Aurelia Ventura/La Opinion)

WASHINGTON -- New polls in California indicate public opinion on same-sex marriage may be changing toward acceptance, and religion continues to play a large role in the change.

A poll released July 21 by Public Religion Research Institute showed that if a vote were held on Proposition 8, which ended same-sex marriage in the state two years ago, Californians likely would allow gay and lesbian couples to marry.

That mirrors findings of a Field Poll released July 20 that was hailed by the gay-rights group Equality California. Both polls found a bare majority (51 percent) of California voters said they would vote to approve same-sex marriage.

The polls come two years after California voters overruled, 52-48 percent, a court decision that had allowed same-sex couples to marry, and as Californians await a ruling from a federal judge on the constitutionality of Proposition 8.

“There was a lot of heat and light and polling right around the 2008 debate [on Proposition 8], and we were interested to see where Californian attitudes were a couple of years out,” said Robert P. Jones, head of the Washington-based Public Religion Research Institute.

Researchers found that roughly one in four Californians say they’ve become more supportive of rights for gay and lesbian people over the last five years. A strong majority (66 percent), however, have seen no change in their views.

The report found that what voters hear from the pulpit often influences opinions on same-sex marriage, and that could tip the scales in favor of repeal. People who hear the issue of homosexuality preached from the pulpit generally oppose gay marriage, the poll found, while those who don’t hear about it are more open to the idea.

About half of church attendees said their clergy speak out about homosexuality, and the majority (58 percent) of those people said the messages discourage homosexuality.

Fifty-seven percent of Latino Catholics said they would vote to make same-sex marriage legal, compared to only 22 percent of Latino Protestants. The Catholic-Protestant divide within the Latino community extends to other gay and lesbian policy issues, as well.

Those findings mirror the report’s larger conclusion that “Protestants are much more likely than Catholics to hear about homosexuality from their clergy.”

“One of the more striking divides among Californians is actually in the Latino community,” Jones said. “I think that’s one of the real stories here.”

Overall, Californians who have no formal religious affiliation were the most likely to support same-sex marriage, at 73 percent.

Although “very reluctant to speculate about future trends,” Jones said the poll was consistent with a general long-term trend showing growing acceptance of same-sex marriage, especially among young people.

And that could be decisive in 2012, when many expect gay-rights groups to launch a formal effort to repeal Proposition 8 -- if it’s not struck down in court first.

“Every year we move forward is another year that 17-year-olds become 18-year-olds and can be eligible to vote. And one of the biggest differences in demographics here is age.”

The Public Religion Research Institute poll surveyed about 2,800 Californians by phone with additional over-samples of 350 African Americans and 200 Latino Protestants, with an overall margin of error of plus or minus 2 percentage points.