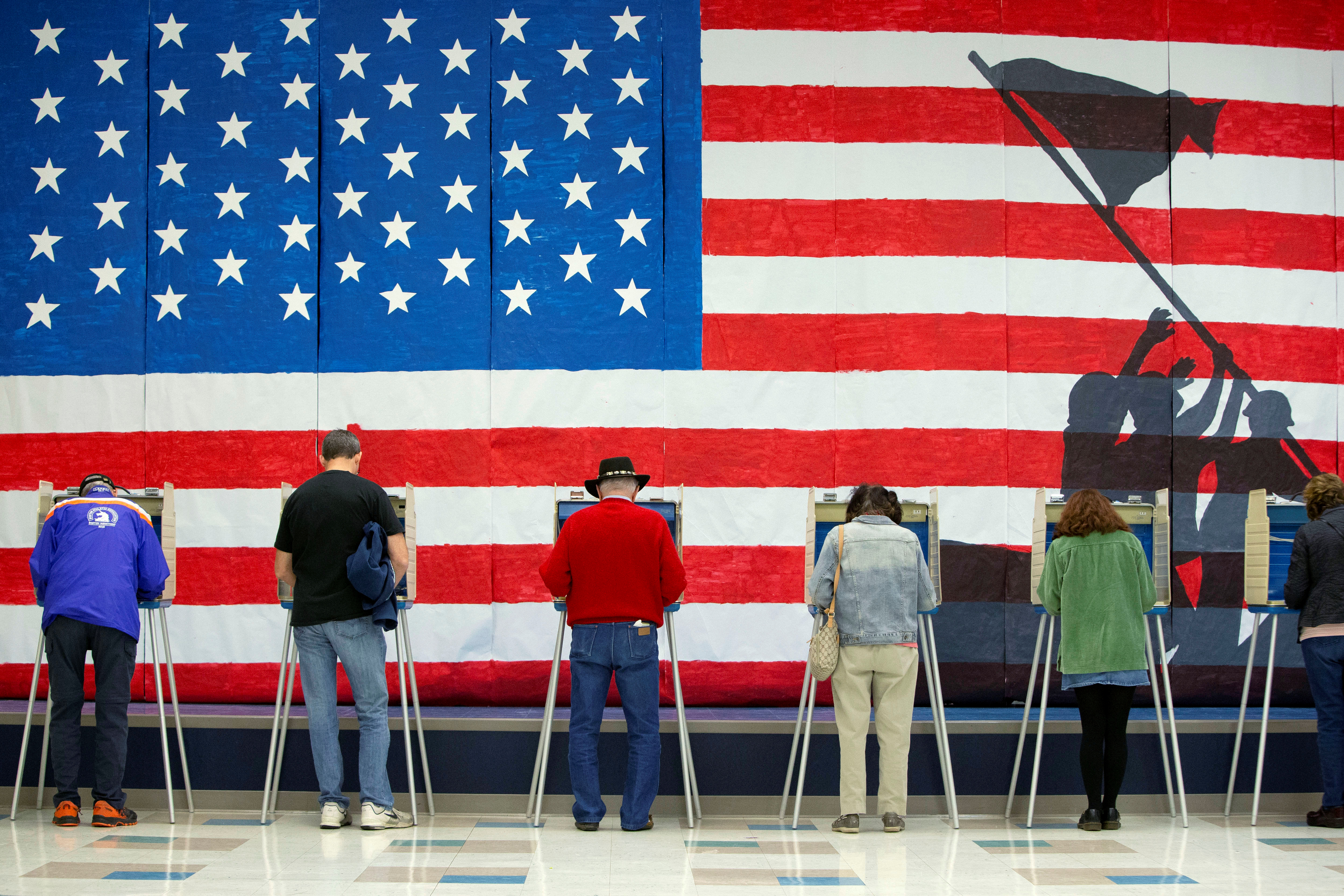 Voters cast their ballots to vote in state and local elections Nov. 5, 2019, at Robious Elementary School in Richmond, Virginia. Six Catholic organizations have joined with other religious groups and denominational bodies in endorsing a wide-ranging platform ahead of next year's presidential election calling for good governance, election security and incentives to encourage people to vote as well as policies to ensure voting rights for the marginalized and people of color. (CNS photo/Ryan M. Kelly, Reuters)

The next time you go to church, you might want to turn off your phone. Political marketers are using cellphone data from churchgoers to target the GOP base, especially white Catholic and evangelicals in key states for the 2020 presidential election.

The practice is called "geofencing," and it has become affordable and common, as retailers track shoppers at malls and political consultants harvest information from cell phones at demonstrations. It has now moved into Catholic churches, with the prize being information on Republican-trending Mass-goers.

Here's how it works: Politically-minded geofencers capture data from the cellphones of churchgoers, and then purchase ads targeting those devices.

That data can be matched against other easily obtained databases, including voter profiles, which give marketers identifying information such as names, addresses and voter registration status.

Such information can be a gold mine — and more and more political campaigns have been finding it useful in the past decade.

At least one lobbying organization, CatholicVote.org, has boasted about the possibilities of using geofencing to help tip the presidential election in favor of President Donald J. Trump.

"We are already building the largest Catholic voter mobilization program ever," CatholicVote president Brian Burch wrote in a blog post last month, which boasted about his group's efforts in geofencing.

Using geofencing, CatholicVote has already identified nearly 200,000 Catholics in Wisconsin who attended Mass at least three times in 90 days. By cross-referencing with other databases, they discovered that half of those Mass-goers are not registered to vote.

In Wisconsin — a key battleground state that Trump won by only 22,748 votes in 2016 — CatholicVote plans a "ground team" to encourage registration and voting among the Catholics identified through geofencing — with the confidence that "60-70% of them are likely to vote like a faithful Catholic," Burch wrote.

"The media is fond of talking about the generic 'Catholic vote,' " he wrote. "But the real Catholic vote is made up of those who live the faith, and practice it. Meaning, they go to church regularly, and will bring their Catholic views on life, faith, and family with them to the ballot box."

CatholicVote plans to use geofencing in Wisconsin, Michigan, Pennsylvania, Arizona and Florida in 2020, in much the same way it did in 2018 in Missouri to help defeat Democratic Sen. Claire McCaskill by calling her "anti-Catholic" for her stance on abortion.

While targeting segments of the electorate — including religious ones — is nothing new, geofencing raises new ethical questions, especially since it treats churches like a public consumerist space and Mass-goers as subjects for potential marketing strategies.

"There is an invasiveness here that feels deeply wrong," said Raúl Zegarra, a doctoral student in theology at the University of Chicago Divinity School. His concerns go beyond the broader issues of gathering data without real informed consent.

"We have to wonder if scrutinizing people's spiritual lives and habits, our most treasured expressions of self and community, is not taking things to a whole different level," he said in an email interview with NCR.

"People should feel free to attend Mass as a moment of pause, reflection and encounter with God and neighbor without feeling that it can become a commodity to be then sold to others for political purposes," Zegarra said.

Zegarra also questions the narrowness of defining "active" Catholics only through regularity of Mass attendance and whether "faithful" Catholic voting is code for a selective set of values, such as opposition to abortion or gay marriage.

CatholicVote.org describes itself as a non-partisan, though willing to take sides "if one candidate or issue is decidedly against the principles we hold dear." Comprised of three legal entities, including a super PAC, it has primarily endorsed Republican candidates.

Although its website lists a number of issues under "What we believe" — including the death penalty, poverty, motherhood and the environment — what CatholicVote advocates for "most of all" is:

CatholicVote.org is a project of Fidelis, a group founded in 2005 by Burch, former National Catholic Register reporter Joshua Mercer and Joseph Cella, founder of the National Catholic Prayer Breakfast. Cella led a Catholic advisory council for the Trump campaign during the 2016 election.

Burch did not respond to NCR's requests for an interview.

A representative from CatholicVote.org — former Kansas congressman Tim Huelskamp, now a senior political advisor for the organization — was among several conservative Catholics who attended a White House meeting on religious freedom last month. 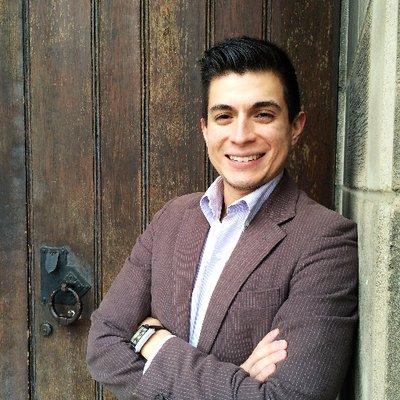 In 2008, NBC rejected a CatholicVote Super Bowl ad that used President Barack Obama's upbringing in a single-parent home as an argument against abortion. In 2015, a CatholicVote video that painted those who oppose same-sex marriage as victims provoked a massive backlash.

The organization initially endorsed Ted Cruz in the 2016 GOP primary and called Trump "a big roll of the dice that could backfire, and potentially have disastrous consequences on the House, the Senate, and on our politics more generally."

But the geofencing announcement — and other blog posts supportive of Trump and critical of Democrats — makes clear the organization supports Trump over any Democratic nominee for president in 2020.

Some political observers see the organization more concerned about rallying conservative Catholics than mobilizing all Catholics to vote.

Anthea Butler, associate professor of religion and Africana studies at the University of Pennsylvania in Philadelphia, is concerned about groups such as CatholicVote making political alliances with evangelical Christians and right-wing politicians.

"It's not surprising," she said. "I see this as playing right into the hands of what most of the U.S. Conference of Catholic Bishops has been doing for the last 10 to 15 years: parroting evangelical political lines."

The U.S. bishops have used a 2007 document on political responsibility called "Faithful Citizenship," which has been updated and amended and this year re-released with a new introductory letter and four videos.

A debate about using language that called abortion a "preeminent" issue at the U.S. bishops' meeting in November revealed division among church leaders about what political issues to emphasize in their own advocacy.

While Catholics make up only 22% of the electorate, they have been historically significant in determining presidential elections. In 2016, exit polls indicated Trump won the Catholic vote, although subsequent studies concluded that Hillary Clinton actually received more votes from Catholics.

But the Catholic vote is not monolithic, as a recent survey of voters by EWTN and RealClear Opinion Research shows. The poll found that 55% of Catholics supported the impeachment and removal of Trump from office.

Catholics surveyed were almost evenly split between those who were unlikely or would never vote for Trump in 2020 (47%) and those who said they were sure or there was a good chance or possibility (53%) of casting their vote for him.

While churches are prohibited from partisan politicking from the pulpit because of their tax-exempt status, that hasn't stopped some groups from leafletting cars in church parking lots, or insiders slipping the church directory information to outside groups.

"Every election year there is both a concerted effort to reach Catholic voters and lots of anxiety about what kind of message is getting out there, particularly in church," Gehring said. "It's a fraught area."

Catholics surveyed were almost evenly split between those who were unlikely or would never vote for Trump in 2020 (47%) and those who said they were sure or there was a good chance or possibility (53%) of casting their vote for him.

CatholicVote.org is aware of the legal restrictions on churches, but sees geofencing as a way around that. "We don't need permission to reach millions of voters," Burch wrote in an Oct. 15 blog post. "You and I can now reach our fellow Catholics — especially Catholics who regularly attend church and proudly vote for pro-life candidates — with the bold, inspiring truth."

For its part, CatholicVote.org is promising "record-breaking turnout of faithful Catholic voters to the polls," according to Burch.

They plan to register 1 million "pro-life and pro-family" Catholic voters in key states and to "personally [contact] every Catholic voter in critical swing states via text, phone or by knocking on their door," he said.

Zegarra accepts that faith and politics have always been related and will always be, but said the issue is howthey should relate. "At bare minimum, we should expect consistency — that the Catholic opposes both abortion and anything that takes away people's dignity; that they defend life, truly, from conception to death," he said.

Favoring some values to the total detriment of others is not true Catholic voter outreach, he said. "It may in fact be the opposite: not a Catholic outreach that represents the universality of this faith, but a sectarian outreach that has reduced it to a political micro-morality."

A version of this story appeared in the Jan 24-Feb 6, 2020 print issue under the headline: 'Geofencing' captures Massgoers' cell data.