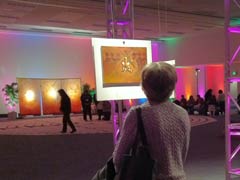 The "Sacred Illuminations" chapel featured light, silence, fine art, reflections, the Stations of the Cross and a labyrinth. (Rose Pacatte)

ANAHEIM, CALIF. -- Ask anyone who participated in the Religious Education Congress March 17-20 how they would describe the event in terms of art, and they will tell you: It’s the people. Ask author/speaker Jesuit Fr. James Martin and he will tell you that the congress -- not Disneyland across the street -- is the happiest place on earth.

Charity Sr. Edith Prendergast, who heads the Los Angeles archdiocese’s Office for Religious Education, told me that she loves the congress for its poetry and beauty. “It is an authentic expression of the life of the church and people come to be enriched.”

At the opening ceremony, people from various cultures and costumes processed in the arena that holds 6,000; there was a lovely liturgical dance, and the music and singing engaged everyone. Prendergast presented our new archbishop, José H. Gomez, “the chief catechist of the archdiocese,” with the illuminated Gospels and Acts of the Apostles from the St. John’s Bible from Liturgical Press. After Gomez opened the congress in prayer, he introduced Prendergast. When she got to the lectern to give her presentation, she said, “You will hear from the archbishop later.” Then she paused and turned back to the archbishop and said, “That is, if it’s OK with you.” It brought down the house.

My assignment from NCR was to write about the congress as “theater.” But as I experienced this event, I realized it is far more than simple performance or spectacle. The congress is a pulsating human work of every style of art, a living mosaic come together to celebrate, “to deepen your lives in Jesus Christ, to reaffirm your love for the church, and to commit yourselves to proclaiming the Good News of Jesus for the whole world,” Gomez wrote in his welcome in the program book.

The archbishop seemed a little shy as the Mass with young people began March 17. I can only imagine how overwhelming it was to walk into such a space. He apologized for wearing purple vestments on St. Patrick’s Day, which got a good laugh. And then when he was about two-thirds of the way through the homily, after a young woman spoke of being a bully and being bullied and a young man spoke of being in a gang and choosing to leave it and live his faith, he stepped away from his printed text to tell his story. He spoke of his decision at the age of 16 to really try to be a good Catholic and go to Mass every day. “Sounds kind of crazy, doesn’t it? But I never expected to get a hat like this, and to tell you the truth, it is kind of uncomfortable and it does not keep out the sun or the rain.”

It was wonderful; the kids responded to him. This year’s congress seemed to touch the hearts of everyone with whom I spoke.

Certainly elements of theater were present. The title of the congress, taken from the Sunday’s reading from Jeremiah, “Hold Firm ... Trust!” expressed the overarching narrative of the story to be lived for the weekend. If the power of drama lies in its transformative ability, then the story will continue in our lives. The presentation styles of the speakers, the way the 243 booths are arranged, the “enormous multicultural diversity” expressed in the liturgies, as one woman said to me -- all create a sense of theater.

Then there are the “costumes” people wear to express their identities: A wide variety of religious habits, African, Pacific Island and Mexican dress, as well as beautiful liturgical vestments were visible. For props, one had to merely walk through the exhibition hall. There were beautiful bas-reliefs, paintings and liturgical art placed with reverence for the potential buyer. But I must say that there was more and bigger religious statuary available this year, but displayed in a somewhat tacky way. I bet next year the visual “noise” of the religious goods may be toned down a bit.

Perhaps most expressive was the music, “some of the best music anywhere,” master piano tuner Ken Bedes told me. He has been tuning the piano in the arena for the congress liturgies for years. “I get up at 5 a.m. to get here by 6 to have the piano tuned by 7 for practice and performance by 8,” he said.

For the fifth year there was a Film Showcase, in partnership with Los Angeles’ Loyola Marymount University. It featured clips from a variety of films by Catholic filmmakers or of interest to the Catholic audience. Seven hundred people attended the showcase. The musical Festival of Cultures was new this year. I was not there but I heard that this “explosion of color, sounds, movement” through music was a big hit.

The Los Angeles Religious Education Congress began as an “institute” in 1962, and as it grew and developed, moved to the Anaheim Convention Center in 1970. By 2000, it was attracting 20,000 participants for the congress and another 10,000 for the associated Youth Day. Prendergast told me that the final count for this year was almost 45,000, including 16,000 for Youth Day. For the first time every U.S. state was represented, and 444 people came from 12 countries.

Master catechists Kathleen and Jeff Flood from St. Bartholomew Parish in Long Beach, Calif., work with the RCIA program and have been coming to the congress for 17 years. “Theater is to tell a story, to get an idea across in a given way, and I think that is what the congress is,” Jeff Flood said. “Each year it is a different story according to a theme. Everyone gets to be a protagonist in their own story.”

Kathleen Flood said that they come “to search for whatever can inform adult faith formation, to take it in, to listen, to hear, to interact with others and bring it back to the RCIA candidates.”

One of the most beautiful aspects of the congress was the Blessed Sacrament “chapel” titled “Sacred Illuminations.” Designed by Notre Dame Sr. Rose Marie Tulacz, the space was described as “mystical choreography” of light, silence, fine art, reflections, the Stations of the Cross and a labyrinth. Confessions were also available.

I met Martha Vespi, originally from Peru, outside the chapel. She works with Magnificat (www.magnificat-ministry.net), a ministry for Catholic women that “helps us tell our stories.” She said, “I came here feeling very burdened, and this sacred space, and the opportunity to go to Mass, confession, to pray, to hear speakers, to get new books, is like a retreat for me. My whole self feels joyful.

“For me,” Vespi continued, “the Byzantine liturgy is so beautiful. I love the icons, the eyes of the icon that lead you into the divine reality.

“I am pretty much on my own here but everywhere I had a conversation and connected with the person next to me. I felt very safe here.”

“Martha,” I asked, “how does the congress change you?”

“It brings me to a place of ‘pause,’ of contemplation, to a sacred space. I am a visual person so I see all these faces coming together to learn, to share with children, with the women I minister to; all the talks are for everyone, for me this is special. I wish it were twice a year.”

Margaret Conners is an educational consultant from Brisbane, Australia. We met as we were both taking photos of the expressionist Our Lady of Guadalupe painting in the sacred space of the chapel. We walked outside and she told me that this was her first congress, and she hopes to come again with her sister, who is a Sister of Mercy.

“Everything I believed and hoped for about coming to this congress has come true,” she said. “Our church is not so demonstrative as yours, with this blending of the art of liturgy and the art of the people. I feel so humbled to be in the midst of people who created this space, who created the vestments in the liturgies, the small meditation cards made by a lady in the hall. We are one church, but with differences that are expressed in this place so beautifully.”

When I was chatting with Jeff and Kathleen Flood, I brought up the animated film “Rango,” now playing. It’s the story of a chameleon (voiced by Johnny Depp) that gets stranded in the Nevada desert. The plot is a little fractured, but besides the politics of water, it is a commentary on screenwriting and filmmaking. At one point, even a Clint Eastwood character appears, a “No Name” Western character. He tells Rango, as he walks off dragging his prospecting cart behind him, “No man can walk out of his own story.”

“The congress plays to all your senses,” Jeff Flood said. “It stays with you, and you spend days unpacking ‘the story,’ thinking and talking about what it all means. The art is making meaning and processing, internalizing, acting out what we listen to, see, taste, smell and touch.

“Maybe the congress is a chance to walk out of our story because it is our story to change and grow.”

Irish priests struggle with sins of the minority

Province to withdraw its Franciscans from ministry in Charleston Diocese