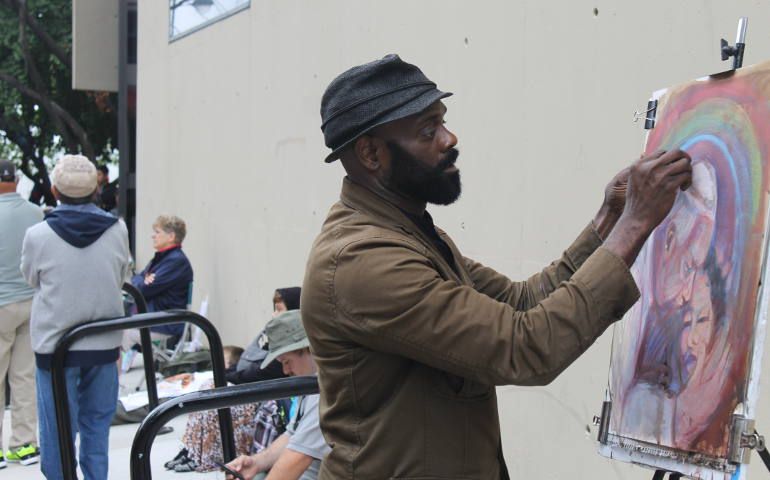 Kevin Johnson of Phildelphia paints a portrait of Pope Francis while pilgrims along Benjamin Franklin Parkway watched. (NCR photos/Brian Roewe)
This article appears in the Francis in the United States feature series. View the full series.

Philadelphia — style="line-height: 20.8px;">With his easel set up back from the massive crowd along Benjamin Franklin Parkway, just south of the Cathedral Basilica of Sts. Peter and Paul, Kevin Johnson felt inspired to paint.

A teacher and mural artist, Johnson, stirred by the show of his city in welcoming Pope Francis, painted the pontiff as people watched him on giant screens celebrate his final Mass of his six-day stay in the United States. More than a few people stopped in their tracks to watch the artist paint, as well.

“The people came out to show love to the pope and love to Philadelphia. I came out because of the people,” he said.

With his phone in hand, Johnson, 50, recreated on his canvas an image from a day earlier, where Francis halted his motorcade departing Philadelphia International Airport to meet with a boy with cerebral palsy, whom he kissed on the forehead.

There’s just so much compassion. Well, let me do something to ignite that passion out of what I’m doing,” he said.

The message of compassion carried further down the parkway.

John Leahy, of Milford, N.J., who saw Pope John Paul II during his 1995 visit, was brought to tears by Francis’ message to families Saturday night. Uncertain a family pilgrimage to Rome may not occur, Caroline Vrazel and her husband made sure their family of five children, the oldest age 11, took advantage of a chance to see the pope, affirmed by his words describing families as a blessing.

“It’s a beautiful thing to know that our Holy Father recognizes the significance and the importance of what we do as individual families and how that impacts the world,” she said.

Despite some crowd pushing and maneuvering as people tried to leave early, the crowd largely stood attentively, watching the pope celebrate Mass on jumbo screens where they stood. About an hour before the service began, most of those standing in Logan Square realized the crowd likely impeded further forward movement. Instead of getting closer to the main stage, they staked their hopes on catching a glimpse of the papal motorcade.

Ryan, Alan and Josh, three teens from Wilmington, Del., were among those who caught a glimpse, as well as video and photos, of Francis as he passed just south of the basilica.

“Everyone was jumping up and down,” said Ryan, who was able to catch a photo. He described the chance to see the pope as “a once in a lifetime chance.”

Humble was the word Josh used to describe Francis, as so many others have throughout the trip and since the start of his papacy.

“He acts like he’s one of us, so it makes it that more special. Like he’s not riding anything really fancy, he’s just coming around. That he took the time to come see us is really special,” he said.

Members of the “selfie” generation, the teens appreciated Francis’ example of humility at a time when the quality doesn’t seem all that common. In his address to bishops earlier Sunday, Francis described a culture that placed less emphasis on developing deep relationships and more on “accumulating ‘friends’ on one of the social networks."

“It used to be more about family but now it’s social media. He’s definitely right about that,” Ryan said.

“It’s a different time we’re living in,” said Johnson, the street muralist. “… On reality TV, we praise those to be destructive and fight on TV, and we never really record moments of humanity or compassion.”

What Johnson heard in Francis’ message was a call for people to do good, help one another “and be a blessing for others.” It’s what led him to paint the pope.

“Yea, that’s a good message, if you can pass that on. It’s an excellent message,” Johnson said.

The streets just outside the security zone were busier than on a normal Sunday, with visitors and natives strolling freely up roads still closed to traffic. While the pizza restaurant up the block had plenty of free tables, the man by the cash register said that they were taking it in stride -- eventually, he said with a grin, those who had participated in the huge Parkway event would get hungry and search for sustenance.

Even though he only got to view the papal Mass on one of the many Jumbotrons strategically set out through Center City, Ivan Arocho expressed nothing but gratitude for Philadelphia hospitality.

In the company of roughly 180 other members of his lay group, members of the Neo-Catechumenal Movement,  Arocho had spent three days as guests of St. Clement's Episcopal Church.

Arocho spoke glowingly of the efforts made by parishioners, which ranged from welcoming them with pizza to renovating the bathrooms before their arrival.

Sharing a devotion to Mary and the veneration of relics, the visitors from the Archdiocese of Newark and the parishioners at St. Clement’s quickly found that they had much in common, said Arocho. Though the New Jersey group didn’t attend a communion service at St. Clement’s, they did participate in Vespers -- and give the rector, Richard Alton, an icon painted by Neocatechumenal Way founder Kiko Argüello.

“It’s been outstanding, it’s been wonderful," Arocho said of their city adventure, a type of holy camp-out. “The City of Philadelphia has lived up to its motto as the City of Brotherly Love."

This in spite of the fact that by after waiting for three hours, he’d not made it as far as one of the security checkpoints to enter the precincts for the Mass on the Parkway, and wasn’t sure if any of his group had been able to enter the grounds.

By late afternoon, there was a steady stream of walkers heading towards the train station, apparently mostly composed of those who, like Arocho, had tickets for the Mass but couldn’t get in.

Though souvenirs might be as close as they got to experiencing the Pope’s presence, many still seemed both cheerful and well-behaved, swapping stories and posing for family pictures. Although the line for the local trains out of town were long (and would undoubtedly become longer as the evening arrived), the fact that many were only making a few stops shortened the ride considerably.

Meanwhile, on Chestnut Street, t-shirts were selling for half-price. Piles of unpurchased merchandise littered outside tables. Within hours, the city would once again become a symphony of honking cars, weaving bikes and harried pedestrians -- but in those late Sunday afternoon hours carved out of ordinary time, it still belonged to Francis.

[Brian Roewe is an NCR staff writer. His email address is broewe@ncronline.org. Follow him on Twitter: @BrianRoewe. Elizabeth Eisenstadt Evans is a religion columnist for Lancaster Newspapers Inc., and writes for NCR and GlobalSisterReport.org.]

World Meeting of Families in Philadelphia: a primer

Want to ride the train to see the pope? You'll have to buy a lottery ticket