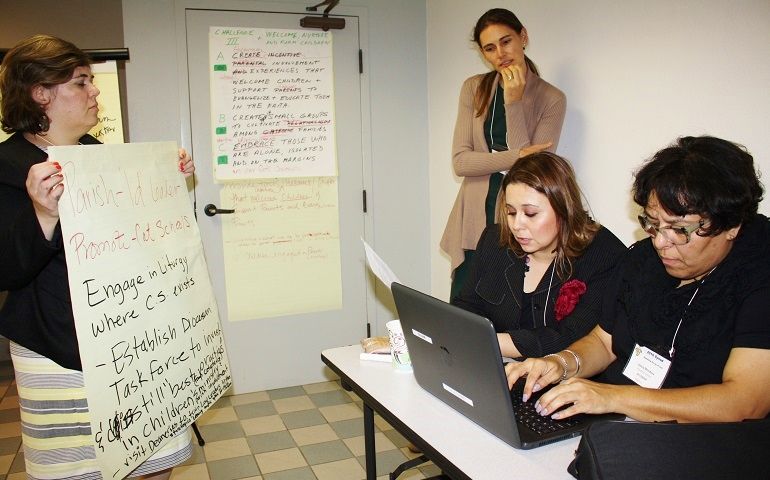 San Diego — Theologians who helped guide and advise the five working groups that were the engine of the San Diego diocese's Oct. 29-30 synod on marriage and family universally praised the pioneering effort and agree that its basic structure and thrust would work well to confront other challenging issues in church life.

Some said they even saw clues for addressing the often-strident differences between progressive and traditionalist wings of the Catholic church.

"Looking broadly, I think the seriousness with which Catholics took this task offers a promising model for healing and bridge-building ... and the American church needs this desperately," said Maureen Day, assistant professor of pastoral theology at the Franciscan School of Theology, Oceanside, Calif.

"I have no doubt that these same people, who waded through muddy waters, would have been able to do this on many 'hot-button' issues that are especially prominent, given the [presidential] election," emailed Day, who worked with the synod discussion group addressing "the challenge to welcome, nurture and form children."

"There is a core that American Catholics share, including concern for the poor and the understanding of Christ's presence in the Eucharist," she explained. "These and others can be important starting points to bring real partnerships and common understanding to our daily lives. Not to sugarcoat any of these, an important lesson from the synod is that this isn't easy. It requires us to be courageous and a willingness to fully hear positions we may staunchly disagree with. But these help us move from abstractions to realities, from seeing stark division to important commonalities."

Holy Child Sr. Tobie Tondi, one of two theologians assigned to the working group on the topic of creating "a culture of invitation and hospitality to unmarried couples," praised San Diego Bishop Robert McElroy for initiating the synod.

"I think it's the only one happening in the country" seeking to concretely address the pastoral challenges set forth in Pope Francis' apostolic exhortation on marriage and family, Amoris Laetitia, she said.

"For the bishop to call together representatives from every parish, and other people who play certain roles in the diocese, and to really use a synodal process to try to move the diocese even further in understanding its role as church, I think it's been a fabulous idea, and it's come to be," said Tondi, who teaches theology at the Catholic University of San Diego.

One or two theologians were invited to work with each of five grassroots groups of parishioners and priests formed after extensive listening sessions in parishes throughout the diocese had taken place. Each unit had a different "challenge" to evaluate and for which to devise achievable, realistic diocesan objectives. Those topics were:

The theologians interviewed by NCR underlined a number of points emphasized in a foundational white paper written in advance of the synod by Msgr. John Strynkowski to "set the tone" for the gathering and flush out the grassroots consultation's mission.

For example, Fr. Michael Murphy and Emily Reimer-Barry echoed Strynkowski's white paper observation that "the teaching of the church on marriage is untouchable" but "what is also untouchable is the long-standing tradition of the church that the most effective way to lead people to full discipleship is by a patient accompaniment that gently leads to ever greater conversion."

"Our doctrine is sound. It is truth," said Murphy, San Diego's director of the diocesan Office for Priests and pastor of Sacred Heart Parish in Coronado. "What I hope comes out of this is that we begin to find some ways around the barriers. ... Using the pope's understanding, how do we lead people along who can't embrace it all the way?"

During the synod process, Murphy served as the theological consultant for the working group on "the challenge to bring spiritual depth to family life."

Chair of the University of San Diego's Department of Theology and Religious Studies, Reimer-Barry worked with colleague Tondi on advising the group on outreach to the unmarried. Reimer-Barry also said that church teaching on the highest ideals of marriage and family was not at issue.

"So many people in our world perceive those teachings as limiting, judgmental, and they feel excluded from being able to experience the fullness of grace," she said. "Divorce, married civilly, a member of family being deported. So many instances of families hurting."

"Just reiterating" church doctrine "is not enough," she stressed.

Strynkowski had been slated to address the synod's general assembly, but was ill. A now-retired priest of the Brooklyn, N.Y., diocese, he served as the U.S. bishops' executive director of the Secretariat for Doctrine and Pastoral Practices (2001-2005) and attended the 2015 Synod of Bishops on the family as the peritus for Chicago Cardinal Blase Cupich.

That global gathering of church hierarchy led to Francis' exhortation. McElroy released his own follow-up pastoral letter, "Embracing the Joy of Love," which expanded on Francis' themes and announced that a diocesan synod would be held this fall.

"Bishop McElroy has expanded the notion of synodality to the diocese, and I think that this is very much in line with what Pope Francis asked for," Strynkowski told NCR by phone. "I think Bishop McElroy's document was geared precisely to this type of a process, which was very well-planned, very well-structured, very well-implemented."

"The synod process was quite effective for inviting the expression of the sensus fidei of Catholics from many levels of engagement in the life of the church, from the average person in the pew to pastors."

Carr advised the discussion team responding to the "challenge to witness to both the beauty and realism of the Catholic vision of marriage and family life."

Her group "invited wide-ranging input to begin and then narrowed the focus gradually through identifying elements which had wide agreement, and which expressed a major level of consensus. By the end, we arrived at a manageable number of concrete goals that made sense to nearly all, which the bishop can use to develop ministry in parishes, in deaneries and at the diocesan level," Carr said.

"The only surprise was how well a group of just 25 diverse persons could hit on so many of the main areas where marriages need strengthening in our local setting," she said, adding that "the synod process as we experienced it was mainly about discovering the essential consensus in a wide group, not creating consensus where it did not exist. The process itself led us to pay attention to and respond to what was important to others, but extreme positions of whatever stripe ended up outside the final priorities of the group as a whole."

Day had similar observations. "Everyone there was truly invested in the synod and wanted to dig deep, ask hard questions, add their part and — and I think this last part is key — really listen to the contributions of others. The result was truly extraordinary and the final proposals reflect the tremendous diversity of experiences of the diocese. By the end of the process, which I liken to childbirth in its efforts and fruits, we had a real beginning that will serve families and the church."

Carr described the synod as "just the first step" and said it provided "us solid direction as a local church."

"The real work will be its implementation," she added. "Much prayer accompanied the synod; even more prayer will be needed to carry it forward."

At the synod's conclusion, 15 action-item resolutions — three from each of the five working groups — were summarized on scrolls and presented to McElroy.

McElroy told NCR he hopes to release a pastoral letter on the synod and its recommendations in January after further consultation with diocesan deans, the Presbyteral Council and a synod implementation committee made up of at least three members of each of the five synod working groups.

In his preparatory theological narrative on the synod and Amoris Laetitia, Strynkowski stressed "the centrality of the parish" and cautioned against a rush to "development of new programs."

"To bear witness is more than programs," he wrote. "It is a matter of words and deeds."

"In a society that today is characterized by hectic and fragmented patterns of life, we must rely more on what we already have in terms of bearing witness," he explained and placed emphasis on the Eucharist and "more specifically the homily."