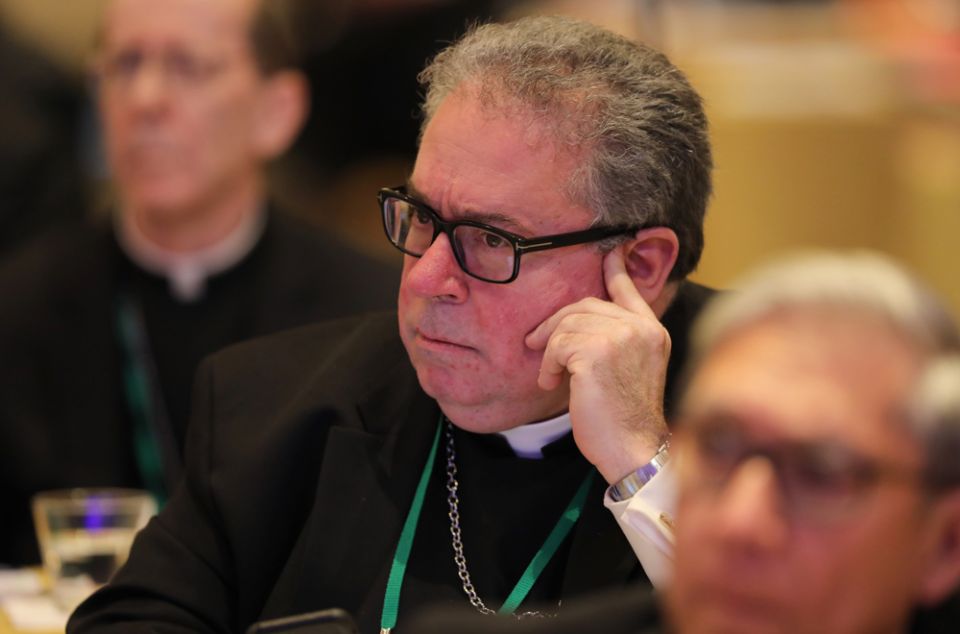 Bishop Michael Olson of Fort Worth, Texas, listens to a speaker Nov. 14 at the fall general assembly of the U.S. Conference of Catholic Bishops in Baltimore. (CNS/Bob Roller)

Last year at this time, parishioners at St. Martin de Porres Parish in Prosper, Texas, were celebrating the dedication of their new school and parish hall, part of a $17 million building project on 52 acres off the booming Highway 380 corridor north of Dallas — the biggest building project in the Fort Worth Diocese to date.

At the school dedication, the parish's building committee chair, Stephen Knobbe, thanked Bishop Michael Olson for his leadership and vision, and for providing the parish with its most valuable resource, Fr. Richard Kirkham, the pastor.

Now, 13 months later, Knobbe is a leader of a group calling for a Vatican investigation of Olson's leadership, primarily for removing Kirkham in June. The diocese insists Kirkham was removed for cause, but his supporters believe the bishop acted in haste and has treated the priest unfairly — and they're concerned that other conflicts in the diocese are evidence of a pattern of an authoritarian management style.

"I never thought I would find myself going against the church I've been a part of my entire life," Knobbe told NCR. "But we are simply asking the Catholic Church to come and investigate the bishop and what he has done to this diocese."

The group, which calls itself FRK (Fr. Richard Kirkham) Advocates, has a website, more than 500 members in a Facebook group and some 1,400 signatures on a petition asking for an investigation into not only Kirkham's removal but what the signers believe is overall abuse of office and power by Olson.

"We, the undersigned, have experienced Bishop Olson's behavior as abusive of his office and divisive both among the faithful at large and within the clergy," the petition says.

Signers come from 28 of the diocese's 90 parishes, Knobbe said.

The petition also cites Olson's controversial closing of San Mateo Catholic Church in a working-class Hispanic neighborhood, changes in leadership at Nolan Catholic High School, and the resignations of Fr. Gary Picou and Fr. Jeff Poirot, the latter after being instructed by Olson to cease his hobby of brewing craft beers.

In response, Olson, who has served as the fourth bishop of the Fort Worth Diocese since 2014, released a four-page letter and video defending his actions. He also gave an interview to the local paper, which resulted in a news story with the quote-headline: "I'm not a dictator."

The news story describes diocesan employees and others who say they are fearful of repercussions if they speak publicly about what they see as a "heavy-handed" management style that doesn't allow for any dissension.

In his video, Olson said that all his decisions are made with "due consultation" and "with the best interests of those involved, and for the common good of the faith and the safe environment and pastoral care of the entire people of God."

He admits that some of his decisions will "undoubtedly disappoint some people, make them unhappy or not be fully understood."

"It's impossible to make everybody happy by a decision I make," he said.

Olson explained that he asked for Kirkham's resignation after seeing a copy of a letter Kirkham wrote to a priest of the Diocese of Dallas, who was allegedly having an affair with a woman in the parish. Olson said the letter was "lewd" and "threatening," but also admonished Kirkham for not reporting the Dallas priest for sexual misconduct with a "vulnerable adult."

The Dallas Diocese conducted an inquiry that did not result in suspension of the priest, but he has since left the diocese.

Kirkham's supporters see him as a "whistleblower" who was offering "fraternal correction" of a fellow priest.

Although Kirkham initially tendered a letter of resignation, he has since rescinded it through an attorney who is representing him. Knobbe notes that the FRK group is not directly affiliated with Kirkham, although some members are withholding donations to the diocese and instead contributing to the priest's legal bills.

When Kirkham's resignation was first announced, Knobbe requested a meeting with the bishop because of his previous work with the diocese on the building project. At that meeting, Olson said Kirkham resigned for his own personal reasons, Knobbe said. Olson later made public information about the letter to the Dallas priest.

Kirkham's supporters were upset with what they saw as "blatant inconsistency" and began researching other controversial decisions and resignations in the diocese — usually of priests who are very popular. Knobbe said he has spoken to clergy who fear the bishop but refuse to speak publicly about their concerns.

"What we've found is that the bishop acts quickly, he doesn't listen to the people and he doesn't follow canon law," Knobbe said "He doesn't allow any due process: It's his decision, and he does not like to be questioned whatsoever."

The group of St. Martin de Porres parishioners say they plan to keep questioning. "This will not stop until we are equally heard," said Edee Hansen in a statement provided to NCR.

Anna Gable, a mother of three, asked, "How am I supposed to encourage vocations in my children when they can be so easily revoked/suspended by a bishop without justification?"

The new pastor, Fr. Stephen Hauck, in a letter posted on the parish's website said he agreed that "some parishioners connected with the FRK Advocate Group are creating discord within our parish and diocese," but said he does not have the authority to "restrict anybody's speech."

However, Hauck, who was ordained in 2017, did ask the FRK group to cease live-streaming their praying of the rosary in the parish chapel, Knobbe said.

So the parishioners moved the twice-daily prayer gatherings to a private home. Knobbe said the group is just trying to accept more lay responsibility for oversight of the church, as some church leaders have recently advocated for in response to the sex abuse crisis.

Parish | 'We're fed up': Group clashes with Fort Worth bishop over pastor's removal