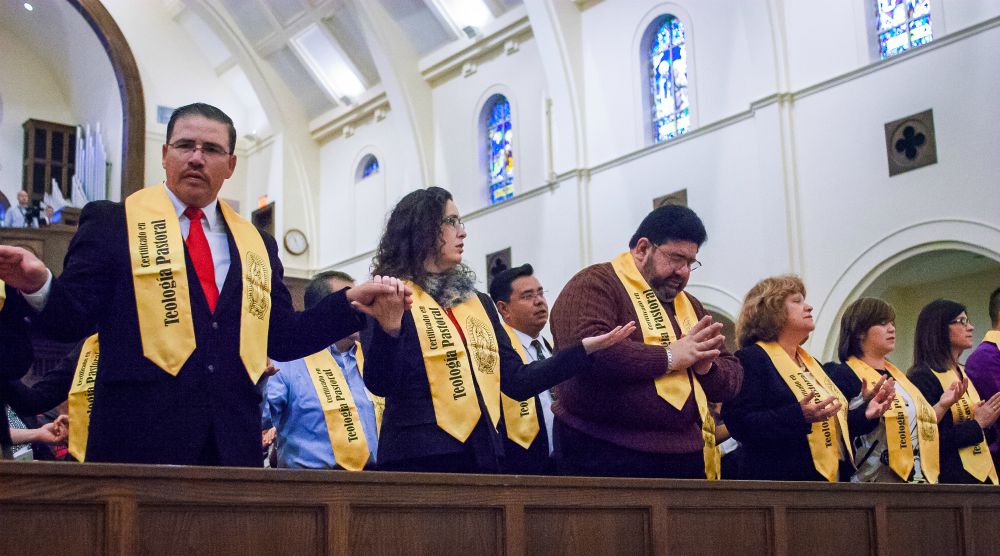 Class members hold hands during a Mass celebrated Jan. 9, 2016, as part of a graduation event at Holy Spirit Church in Atlanta. Some 60 Spanish-speaking catechists from 30 parishes completed a the three-year pastoral theology program, which was offered online through the University of Dallas.(CNS/Georgia Bulletin/Thomas Spink)

A study released this summer by the Center for Applied Research in the Apostolate (CARA) at Georgetown University indicates a 16-percent drop in participation in lay ministry training programs over the past year.

Zeni Fox, a retired professor of pastoral theology at Seton Hall University, wrote her doctoral dissertation on such programs. She told NCR that the numbers could be an indication that such programs are being increasingly abandoned by dioceses.*

"If a bishop values lay ecclesial ministry, he does something about it," she said. Such programs "have been allowed to die on the vine" as their directors, many of whom established programs in the 1980s and 1990s, retire.

For the 2016-17 academic year, CARA counted 19,969 students enrolled in lay ministry formation programs, with most (15,010) in certificate programs and the remaining 25 percent pursuing graduate degrees. For the 2015-16 academic year, 23,681 candidates were reported. In 2002, such programs were at their height, enrolling 36,000 students, said Mary Gautier, senior research associate at CARA.

When the U.S. bishops approved a statement supportive of lay pastoral ministry called "Co-Workers in the Vineyard" in 2005, there was a surge of interest. But that declined as attention focused on promoting the diaconate as a response to the widely-acknowledged shortage in the number of priests in the U.S., said Fox.

One problem, she said, "is that we don't have a clarity of language" around lay ministry. The rite of ordination for deacons and priests is a clear marker that lay ministers don't possess. Some bishops lack appreciation of professional lay ministry. In some places, lay ministry graduates report having difficulty finding jobs in parishes.

Other experts on lay ministry point to growing programs, particularly in the South and West, as counteracting the decline in the East. They also argue that the data on decline is ambiguous.

Much of the drop-off cited by the study could well be a temporary glitch in the data, Gautier told NCR. The numbers could be skewed by reliance on self-reporting from dioceses, which varies year-to-year.

There are other obstacles in researching the numbers, said Gautier. One is defining what a lay pastoral minister is.

In the 1980s, there were 210 such programs counted by CARA. In its latest study, CARA identified 202 and received responses from 95 percent of them, 191 programs. Some programs are run by dioceses, others by Catholic colleges, and others are hybrids of both. Large regions of the country, particularly in the South and the West, lack institutions of higher Catholic education able to partner with dioceses to provide training programs. In response, online programs developed to reach students in more isolated regions.

Graduates often go on to paid positions in parishes, like music ministry and youth ministry, with some, bestowed with church management degrees, working in parish administration.

The CARA study also charts an emerging Latino influence in the church as reflected in enrollment in lay ministry programs.

The numbers indicate that many Latino immigrants don't have college backgrounds but are interested in ministry work, said Marti Jewell, associate professor of pastoral theology at the University of Dallas.

"It is reflective of the changing face of the church in the United States," said Jewell. "In that sense, it is good news."

As for the reported decline in total numbers, Jewell said more data is needed.

"I think it's too soon to say we've got a trend going," she said. 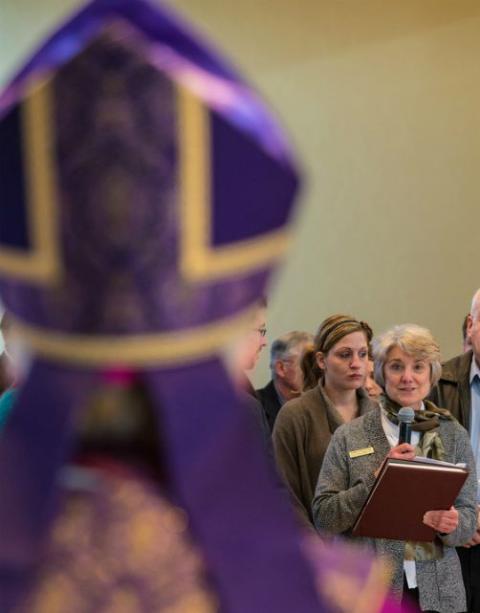 According to the CARA study, programs geared to Latino ministry are active in Oakland, California; Chicago; Brooklyn, New York, and eight other dioceses. Other programs train pastoral ministers in Haitian Creole, Vietnamese and Korean.

Jewell said the University of Dallas has an active lay ministry program that awards degrees and works with the Diocese of Dallas, as well as dioceses in Fort Worth and Tyler, Texas, and Shreveport, Louisiana.

Women comprise two-thirds of the students in ecclesial ministry formation programs, with 64 percent being lay women, and 2 percent being women religious.

Compared to the wider churchgoing Catholic population, people these training programs are relatively young. Sixty-one percent are in their 40s and 50s, and 30 percent are under 40 years of age. About 10 percent are over 60.

For women interested in doing pastoral ministry, such programs provide a gateway to ministry positions in a church that reserves ordination to priesthood and the diaconate to men. "If you are a woman, it's your only choice," said Jewell. The impact of an estimated 50,000 lay pastoral ministers now working in parishes, she said, provides "a balance in ministry to the community."

Jewell said the importance of training for ministry is evident, whether those studying will serve as priests, deacons or as laypeople. Catholic parishioners, she said, "deserve people who are properly formed. That's the big question."

*This story has been corrected.

This story appears in the The Field Hospital feature series. View the full series.
A version of this story appeared in the Nov 3-16, 2017 print issue.