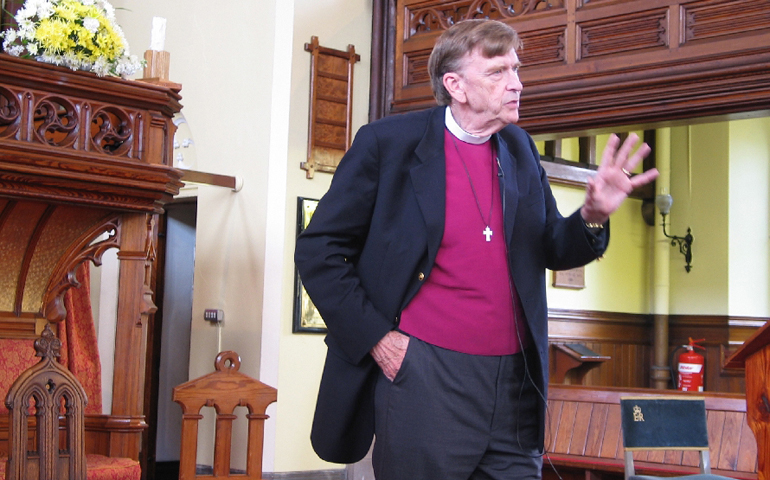 At 82, retired and enjoying life, Bishop John Shelby Spong doesn't have to be the liberal enfant terrible whose pronouncements for gay rights and against traditional dogmas once scandalized Christendom.

Indeed, many of the views that once turned the former Episcopal bishop of Newark into a lightning rod are now regarded as so matter-of-fact that they barely occasion much notice: ordaining gay clergy and blessing same-sex marriages, for example, or having a female presiding bishop, Katharine Jefferts Schori, the first woman elected to lead a national church in the Anglican Communion.

"I can remember when getting a woman as a rector was the hardest thing you ever did," Spong said with a gratified smile as he relaxed on a sofa in the suburban New Jersey home he shares with his wife, Christine. ("I was told to put a collar on. I haven't worn one in a long time.")

On a range of issues, Spong can point to advancements he helped push during a long and remarkable career -- 20 years as a priest in North Carolina and Virginia and 24 years as a bishop in Newark. During that time, he became an unabashed provocateur in the fierce debates over sexuality that split many churches, including his own, both in the U.S. and abroad.

Through it all, Spong never retreated an inch. By the time he retired in 2000, his own diocese had 35 openly gay and lesbian clergy, and he also helped promote a new generation of church leaders who can carry his progressive torch: Eleven clerics from his tenure are now bishops, more than from any other diocese, he says.

At the same time, Spong also became a best-selling author who routinely, and infamously, questioned long-held doctrines and literal interpretations of the Bible. The virgin birth, the bodily resurrection of Jesus, the historical accuracy of Jesus' sayings in the Gospels -- all these and much more were targets of Spong's pointed pen during his heyday.

"It was really a very exciting time," he said of the fight for rights for gays and women. "That battle was very controversial. But that battle is so over today. That battle is won."

Yet while he finds the victory deeply satisfying, he says he doesn't take personal pride in this tectonic shift.

"I was simply interpreting a rising consciousness," he said. "Whether it was race or women or homosexual people, the issue was always the same: fighting against anything that dehumanizes a child of God on the basis of an external characteristic."

Now, he said, "I feel mellow," his soft drawl burnishing the tone of reflection. "And I don't think I've changed, particularly. I'm just not controversial in my church anymore."

But those who love Spong -- and the many who love to hate him -- need not worry: He is hardly going gently into that good night. He seems as vital and youthful as ever, tall and lanky with a shock of reddish hair that still falls insistently across his forehead. He does 4 miles every morning on the treadmill, and he and his wife travel about 60 percent of the year, mainly at the invitation of audiences who want to hear more from Spong.

And he has a new book out -- his 24th. This latest one is a take on the Gospel of John called The Fourth Gospel: Tales of a Jewish Mystic. As the subtitle suggests, Spong reads the Gospel through a Jewish lens, as he has done in many of his works.

Yet this book is also an unusual one for Spong. Not only is John considered the least historically reliable of the four Gospels, but the book is also the one most focused on the divinity of Jesus at what many would say is the expense of his humanity, which has been Spong's chief interest.

Spong doesn't think any of the Gospels are literal retellings of the life of Christ. "All of them were written 40 to 70 years after the crucifixion, in a language that Jesus did not speak, and not by eyewitnesses," he said. "I see them more as Jewish interpretive portraits painted by Jewish artists try to capture the essence of this man's life."

Those are, of course, the kinds of statements that set many Christians -- even many fellow Episcopalians -- on edge, to say the least. "A lot of people hear me attacking their certainty. I don't have any interest in doing that. I'm interested in penetrating the meaning of certainty. We have to get beyond the symbols. And John's Gospel does that for me."

Still, he concedes, "I wouldn't have touched John's Gospel even 10 years ago."

But age has a way of shifting one's focus. In 2010, Spong published a book on life after death (Eternal Life: A New Vision) that he had abandoned 25 years earlier because "I clearly wasn't ready to write it." Even in his late 70s, describing the afterlife was a struggle.

"I had no vocabulary for it," he said. "I don't think much about my physical body going off into the long, green fairways of heaven to play golf."

In a sense, following the path of a mystic -- like the author of the Gospel of John -- only became possible as Spong, the rational-minded Bible scholar, aged. And that process in turn seems to have highlighted Spong's roots as a pastor and teacher -- a spiritual writer as much as a controversialist.

"The older I get, the more deeply I believe but the fewer beliefs I have," he said, citing an adage once relayed to him by an older bishop. "And I think that's probably where I am. I have a sort of mystical awareness (of God) that's indescribable, but I can't avoid it. When I'm asked to define God, I'm almost wordless."

Not that he's toothless, by any stretch. He still relishes the memory of past battles with the likes of Fox News' Bill O'Reilly. "I really like him, strangely enough. Once you get him off camera he's a very decent man. Much of that's his persona. He's a tough nut on the air, hard to get a word in edgewise. I think he's got a personal integrity. I've really enjoyed him."

HBO's Bill Maher, who comes from the other side of the spectrum from O'Reilly, also had Spong on his cable show many times. "He's violently antireligious in his pronouncements and yet he introduced me once as his favorite theologian in America," Spong said.

Despite the labels that have stuck to him -- maverick, reformer, revolutionary and, of course, heretic -- Spong thinks of himself "as an old-fashioned religion man."

"It always surprises my critics. Plenty of people out there think of me as the Antichrist or the devil incarnate because I do not affirm the literal patterns of the Bible. But the fact is I can no more abandon the literal patterns than I could fly to the moon. I just go beyond them."

He's currently writing about the Gospel of Matthew, though he isn't sure whether it will be a book or just part of the weekly column he writes. "I'm 82. I can't be sure I'll be alive in the two or three years it'll take me to finish it."

However it turns out, Spong will be happy if people take something positive away from it.

"It's been kind of nice to get past the controversial stuff," he said, "and have people begin to appreciate me."