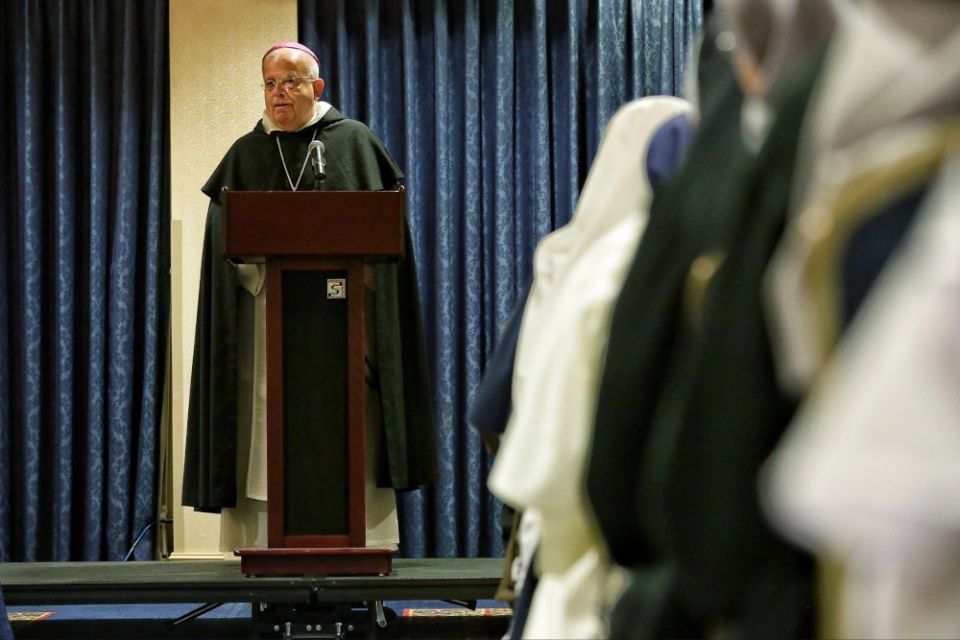 Archbishop Augustine Di Noia, adjunct secretary of the Congregation for the Doctrine of the Faith, is pictured in a Nov. 13, 2015, photo. (CNS/St. Louis Review/Lisa Johnston)

Vatican City — Archbishop Augustine Di Noia, adjunct secretary of the Congregation for the Doctrine of the Faith, said a letter he sent in late May to the president of the U.S. bishops' conference was simply "a letter of acknowledgment" of the receipt of communication from him.

Di Noia said he thought the letter was read "in order to demonstrate the collaborative relationship between the CDF and the USCCB, in order to counter suggestions to the contrary that are in the air."

"The letter contained a bland sentence that has received a lot of unmerited attention in the press: The congregation 'looks forward to the informal review of the eventual draft of a formal statement on the meaning of the Eucharist in the life of the church,'" Di Noia said in an email to Catholic News Service June 17.

"It would be helpful if you were to explain the utterly routine character of such communications," the archbishop added.

Cardinal Luis Ladaria, prefect of the doctrinal congregation, had written May 7 to Gomez urging a focus on dialogue and unity in any attempt by the bishops to address the situation of Catholics in public office who support legislation at odds with Catholic teaching, particularly on abortion.

In a May 22 letter, Gomez clarified the parameters of the proposed document and sent the U.S. bishops a brief outline of what had been prepared by the bishops' doctrine committee. Gomez sent a copy of that to the Vatican doctrinal congregation as well.

Di Noia's May 28 letter was an acknowledgment of the Vatican's receipt of what Gomez had sent. In Italian, such correspondence is called "'an accusa di ricevuta' in which we thank the president of the USCCB for the memorandum and brief outline of a possible document, basically the publicly available documentation that would form the basis for discussion on this particular issue at the general meeting," Di Noia told CNS.

The letter, as quoted by Gomez, read: "On May 24, 2021, this congregation received your memorandum sent to the bishops of the United States, which included a brief outline prepared by the doctrine committee to be proposed to the body in June. This dicastery is grateful for the information and looks forward to the informal review of the eventual draft of a formal statement of the meaning of the Eucharist in the life of the church.''

"Never has a letter of so little moment received such a level of unmerited attention," Di Noia said. "When we heard about the furor, we looked high and low for a letter bearing my signature that could possibly have created such a fuss. Finally, late this afternoon, we realized that they were talking about an 'accusa di ricevuto,' which we then located in the appropriate file."

After Vatican warning, US bishops have limited options for planned text about Biden

Six suggestions for the Catholic bishops' document on the Eucharist

Your thoughts on the bishops, Biden and Communion