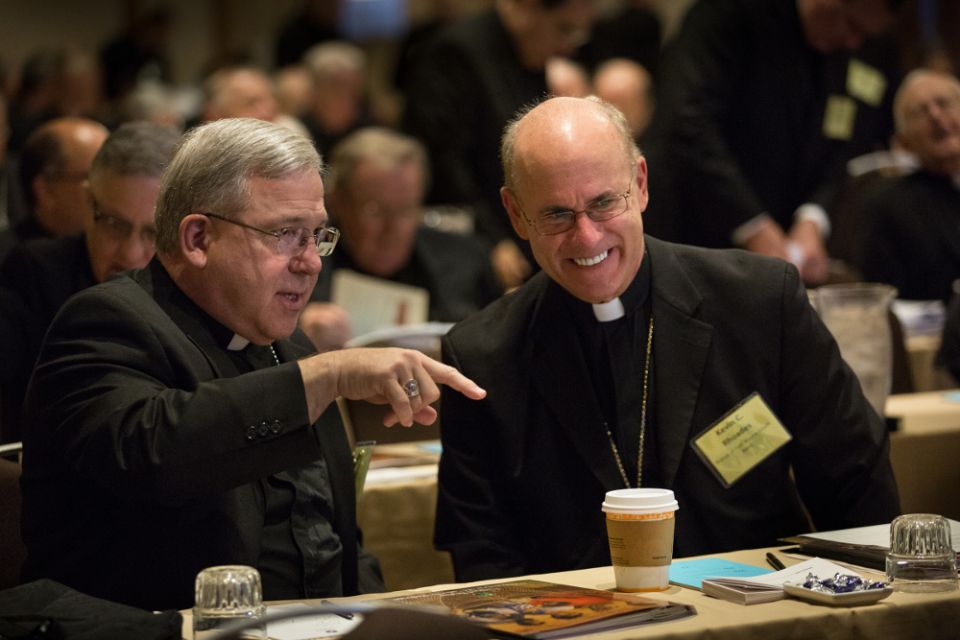 SAGINAW, Mich. — Bishop Joseph R. Cistone of Saginaw, 69, died in his home during the night, according to a diocesan statement Oct. 16. The cause of death has not been determined.

According to local news reports in Michigan, officials responding to an emergency call Oct. 16 at his residence found the bishop was deceased. The Saginaw Diocese confirmed Cistone's death, saying he died the previous night.

He had been scheduled for a medical procedure Oct. 16 to relieve the symptoms of lung cancer, the diocese said.

Cistone's funeral Mass will be celebrated Oct. 23 at the Cathedral of Mary of the Assumption in Saginaw. Detroit Archbishop Allen Vigneron will be the main celebrant, and the homily will be given by Bishop Michael Burbidge of Arlington, Virginia.

Last February, Cistone announced that he had begun treatment for lung cancer. The bishop was optimistic about what was to be a six-month treatment. He had experienced a persistent cough and labored breathing since September 2017, and he sought tests that diagnosed the cancer.

"The good news is that, since I have never been a smoker, it is a form of lung cancer which is treatable and potentially curable," the bishop said at the time.

On Oct. 17, the Saginaw Diocese announced that Pope Francis has appointed Bishop Walter Hurley as apostolic administrator, effective immediately. Hurley headed the Diocese of Grand Rapids from 2005 until his retirement in 2013.

In his new capacity, he will serve as the caretaker for the diocese in this time of transition, "addressing the spiritual needs of the diocese and keeping things working in an orderly way" until a new bishop is appointed, the diocese said.

Fr. William Rutkowski, vicar general of the Diocese of Saginaw since 2013, welcomed Hurley in a meeting with diocesan staff.

Cistone, a native of the Tacony section of Northeast Philadelphia, was appointed bishop of Saginaw by Pope Benedict XVI May 20, 2009. Two months later, on July 28, at St. Stephen Catholic Church in Saginaw, Cistone was installed as the sixth bishop of Saginaw.

Soon after he arrived in Saginaw, parish leaders called upon Cistone to address the need for parish restructuring.

In 2011, as part of an overall plan to strengthen the church of Saginaw and position parishes to better engage in the work of evangelization, Cistone announced a historic undertaking called "Planning Tomorrow's Parishes."

The strategic planning process was designed to engage parishioners to assess the state of churches across the 11-county diocese and develop recommendations to enhance the vibrancy of parish life. The process led to Cistone's decisions in January 2013 to restructure parish communities and designate use of churches to better serve the faithful.

In his 2011 pastoral letter, titled "A Future Full of Hope," Cistone encouraged Catholics "to trust in the Lord's plan," a message he continued to share with the diocese.

In the letter, he shares his vision for a complete revitalization of the diocese, including a commitment to evangelization, vocations, lifelong discipleship and promotion of a deeper love, appreciation and understanding of the gift of the Christ in the Eucharist.

A diocesan biography of Cistone said he enjoyed spending time among the people, providing "public witness" to the good news of Jesus Christ by celebrating Mass, leading Holy Hours, administering the sacrament of confirmation, particularly to the youth, ministering to migrant workers, speaking at community events and visiting Catholic schools.

He regularly traveled with pilgrims to the March for Life in Washington and prayed outside a Saginaw abortion clinic.

On the national level, he was a member of the board of directors for Catholic Relief Services and traveled to El Salvador and Ethiopia on the agency's behalf. CRS is the U.S. bishops' overseas relief and development agency.

Born May 18, 1949, Joseph Robert Cistone was the second of three sons born to Josephine R. (Altomare) and Daniel A. Cistone Sr. He was baptized and grew up in the close-knit Italian parish community of Our Lady of Consolation in Philadelphia.

He received his elementary education from his parish school and later graduated in 1967 from Father Judge High School for Boys. That same year, he entered St. Charles Borromeo Seminary in Overbrook, Pennsylvania, where he earned his bachelor's degree in philosophy in 1971 and a master's degree of divinity in 1975.

He was ordained to the priesthood May 17, 1975, by Cardinal John Krol for the Archdiocese of Philadelphia.

On June 8, 2004, St. John Paul II named Cistone as an auxiliary bishop for the Archdiocese of Philadelphia. Cistone chose for his episcopal motto a phrase from his daily devotion to Philadelphia's St. John Neumann: "Father of Mercy and Love." Five years later he was named to head the Diocese of Saginaw.

Hurley is well known for his work with Catholic Charities West Michigan, for establishing FAITH Grand Rapids magazine, orchestrating the development and construction of Cathedral Square in Grand Rapids, among other things.

"I am happy to serve," he said in his statement. "I want to walk alongside the people of the Diocese of Saginaw as we await Pope Francis' appointment of a new bishop."

Matt Gambino in Philadelphia contributed to this story.