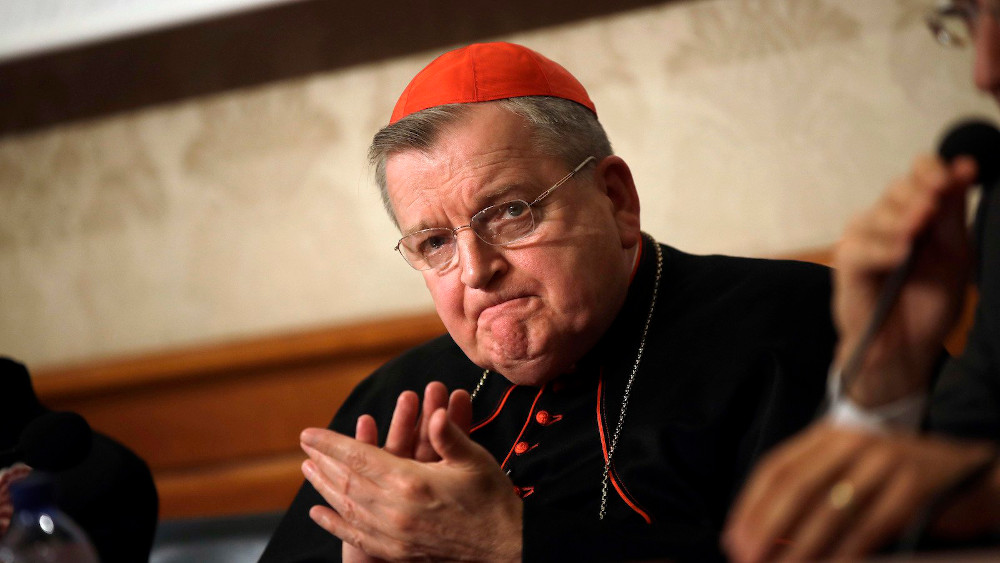 Cardinal Raymond Burke applauds during a news conference at the Italian Senate on Sept. 6, 2018. (AP/Alessandra Tarantino)

In an online statement, conservative Cardinal Raymond Burke said that access to Mass and the sacraments must not be denied even as the world faces the coronavirus pandemic.

"In considering what is needed to live, we must not forget that our first consideration is our relationship with God," Burke wrote in a letter published on his website March 21.

"That is why it is essential for us, at all times and above all in times of crisis, to have access to our churches and chapels, to the Sacraments, and to public devotions and prayers."

The U.S. cardinal has been a staunch critic of Pope Francis' pontificate and was among the four cardinals who authored the "Dubia," a document challenging the Holy Father about his cautious opening to allowing Communion for divorced and remarried couples in the 2016 apostolic exhortation Amoris Laetitia.

Burke resides in Italy, which has experienced the deadliest outbreak of the coronavirus, surpassing China. Almost 5,000 people have died in Italy and over 50,000 have been infected. On March 21, 793 people died as a result of the virus, a trend that shows no signs of slowing, especially in the northern part of the country that was struck the hardest.

The Italian bishops conference initially banned all Masses and religious gatherings throughout the country in order to adhere to the safety measures enacted by the government.

The vicar of Rome, Cardinal Angelo De Donatis, later allowed priests and pastors to act according to conscience while maintaining the 3 to 6 feet of distancing.

Burke noted that just as people are able to continue going to pharmacies and supermarkets, the faithful "must be able to pray in our churches and chapels, receive the Sacraments, and engage in acts of public prayer and devotion, so that we know God’s closeness to us and remain close to Him, fittingly calling upon His help."

Many priests throughout the country have looked for alternative ways to practice the Catholic faith and maintain a community with their flock, especially through the use of social media and livestreaming. Others have instead put themselves on the front lines by administering the sacraments to the sick and dying or attending to the needs of their local hospitals.

"There is no question that great evils like pestilence are an effect of original sin and of our actual sins. God, in His justice, must repair the disorder which sin introduces into our lives and into our world," Burke wrote.

The cardinal criticized pop culture for being distant from God, offering examples such as abortion, euthanasia and "the pervasive attack upon the integrity of human sexuality."

"With ever greater concern, we witness the devastating effect on individuals and families of the so-called 'gender theory,' " he wrote.

Burke called priests to continue celebrating Mass, keeping the necessary distance between the faithful. He explained that the confessional and the church itself could, in his opinion, easily be sanitized by clergy or willing members of the Catholic community.

"We cannot simply accept the determinations of secular governments, which would treat the worship of God in the same manner as going to a restaurant or to an athletic contest," he wrote.

"We bishops and priests need to explain publicly the necessity of Catholics to pray and worship in their churches and chapels, and to go in procession through the streets and ways, asking God’s blessing upon His people who suffer so intensely."