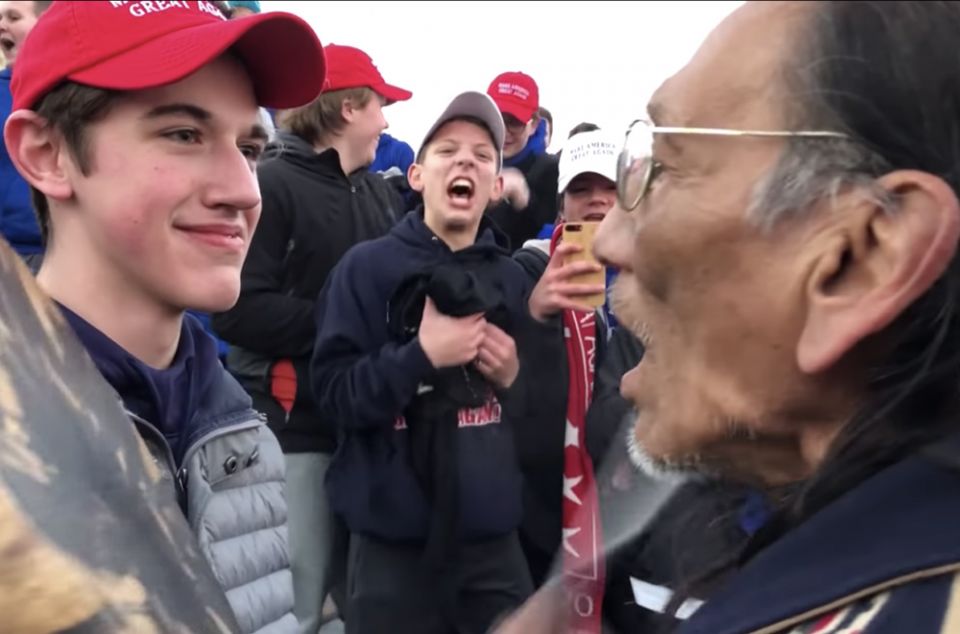 Screengrab from a viral video showcasing a confrontation between Nathan Phillips, an Omaha elder, and a group of Catholic high school students in Washington, D.C. on Jan. 18. (RNS/Screenshot via YouTube)

Washington — A Catholic high school in Kentucky is apologizing after videos surfaced of students dressed in the school's garb confronting and mocking a group of Native Americans — including an Omaha elder* — in Washington, D.C.

Several clips of the encounter circulating on social media show a small group of Native American drummers, who were in Washington for the Indigenous People's March, being surrounded by a much larger band of teenagers.

Most were young men who wore hats or shirts bearing Donald Trump’s campaign slogan "Make America Great Again." Others wore clothing with references to the March for Life, an anti-abortion event convened on Friday (Jan. 19) that the students attended.

Some of the young men wore hoodies that bore the logo of Covington Catholic High School in Park Hills, Kentucky.

In one of the videos, the young men clap along to the drumbeat of a man who Indian Country Today identified as Nathan Phillips, an Omaha elder*. But the moment quickly turns confrontational as the mass begins mocking the elderly man by shouting a faux Native American chant used by the Atlanta Braves and other sports teams.

The crowd then begins to laugh and shout as one young man, donning a Make America Great Again hat, stands in front of Phillips and stares, grinning.

As the crowd continues to heckle and chant, Phillips stares back and continues to drum, seemingly unfazed. But his companions appear to grow increasingly agitated as the crowd encircles them.

"You guys are acting like a mob!" one woman yells at the camera.

Covington Catholic officials did not respond to multiple requests from Religion News Service for comment.

They released a joint statement with the Roman Catholic Diocese of Covington Saturday afternoon.

"We condemn the actions of the Covington Catholic High School students towards Nathan Phillips specifically, and Native Americans in general, Jan 18., after the March for Life, in Washington, D.C.," the statement read. "We extend our deepest apologies to Mr. Phillips. This behavior is opposed to the Church's teachings on the dignity and respect of the human person. The matter is being investigated and we will take appropriate action, up to and including expulsion. We know this incident also has tainted the entire witness of the March for Life and express our most sincere apologies to all those who attended the March and all those who support the pro-life movement."

Chase Iron Eyes, lead counsel for the Lakota Peoples Law Project and a spokesperson for the Indigenous Peoples Movement, witnessed the encounter.

In an interview with RNS, Iron Eyes said Phillips and several others were closing out the ceremonies of the Indigenous Peoples March by blessing the grounds of the Lincoln Memorial when they observed 30 or 40 teenaged boys engaged in a back-and-forth with a small group of black religious demonstrators.*

Another video widely shared on Sunday (Jan. 20) showed the demonstrators repeatedly yelling insults and curses at the students. The students eventually responded by shouting school chants. One student removed his shirt as his companions yelled. Another student can be seen rolling a water bottle across the ground in the direction of the men.*

Iron Eyes said Phillips attempted to defuse the situation by offering a song, “trying to get young people to listen," and video shows him walking over to the students while drumming.* Iron Eyes called the AIM Song, associated with the 1970s American Indian Movement, a "spiritual symbol," saying the wordless melody "is meant for all of us to sing."

"To have our elders who are closing out, you know, a beautiful day — one that started kind of chilly and cold, but the sun came out and joined us and blessed us — to have them go through that was a particularly egregious ordeal," he said.

Iron Eyes called the students behavior "unfortunate and sad." He said that they were following the example of President Trump.

"They're just responding to a president that is giving license to racists and bigots who have no place in our society," he said.

Still, he expressed concern for the students.

"I wouldn't even wish ill will on those kids," he said.

In a statement posted online Sunday by CNN's Jake Tapper, the student seen in the stare-down with Phillips said his actions also were an attempt to defuse the situation. Covington Catholic junior Nick Sandmann cited his Catholic faith and said he tries to live out its ideals, including being respectful of others and not taking any action that would lead to conflict or violence.

Sandmann said he was "startled and confused" when the elder walked up to him, drumming, and "said a silent prayer that the situation would not get out of hand."

"We had already been yelled at by another group of protestors, and when the second group approached I was worried that a situation was getting out of control where adults were attempting to provoke teenagers," he said.

The Archdiocese of Cincinnati also criticized the students’ actions, tweeting that "incident at the March 4 Life was unfortunate & regrettable."

According to Indian Country Today, Phillips is a former director of the Native Youth Alliance and holds an annual ceremony honoring Native American veterans in the Arlington National Cemetery.

A separate clip posted to Twitter appears to show him emotionally reacting to the encounter.

Phillips continued to speak over the sound of additional chanting in the distance: "I wish I could see the energy of that young mass of young men, put that energy into making this country really great — helping those that are hungry."

Organizers of the Indigenous Peoples March condemned the incident.

"What we saw yesterday, the display surrounding Mr. Phillips, is emblematic of the state of our discourse in Trump’s America,” Darren Thompson, an organizer for the Indigenous Peoples Movement, said in a press release. "It clearly demonstrates the validity of our concerns about the marginalization and disrespect of Indigenous peoples, and it shows that traditional knowledge is being ignored by those who should listen most closely."

March for Life president Jeanne Mancini insisted the encounter did not represent her organization.

"The pro-life movement at its core is a movement of love and the reprehensible behavior shown in the video in no way represents the 46 years and millions of people who have peacefully and respectfully gathered in Washington, DC to stand up for the unborn," she said in a statement sent to RNS. "Nor does it represent the vast majority of the marchers present at this year's March for Life. Such behavior is not welcome at the March for Life and never will be."

Phillips was reportedly the victim of a separate incident of student harassment in 2015, when Eastern Michigan University students dressed as Native Americans allegedly threw a beer can at him and shouted racial slurs.

*Editor's note: This post has been updated Jan. 25 at 12:15 p.m. to remove references to Phillips as a Vietnam War veteran, after it was reported that he was not deployed to Vietnam. Previously this post was updated Jan. 21 at 3:15 p.m. CST to include details from the student's statement posted online Jan. 20, and updated Jan. 20 at 8 p.m. CST with information from newly discovered videos of the incident, and to clarify the details of the initial encounter between the Native American group and the students.

The Native America of today