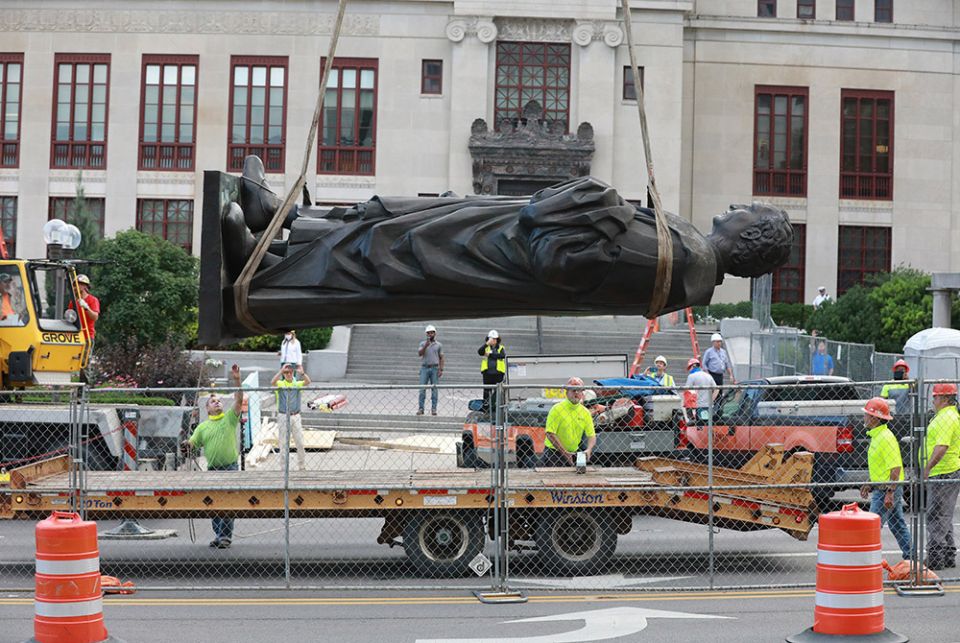 Workers remove the Christopher Columbus statue on the Broad Street side of Columbus City Hall July 1, 2020, in Columbus, Ohio. The city says it will be replaced with a different statue or artwork that reflects diversity. A city news release said it will be placed in safekeeping at a secure city facility. (Newscom/Doral Chenoweth/Columbus Dispatch/NTS)

Small-town Marshfield, Wisconsin, is far from the protests that have rocked the country’s big cities since the end of May, but sisters Ruth and Ella Schultz felt they could no longer remain silent.

Along with a third alumna, they wrote up a petition demanding that their alma mater Columbus Catholic High School change its name and remove a statue of the 15th century Italian explorer from the grounds.

They had long considered challenging the school’s name but worried that the efforts would fall on deaf ears at the overwhelmingly white school.

"But then all the stuff with George Floyd, Breonna Taylor and Black Lives Matter came up, and we thought this was something that had to be done now because there was already so much momentum going," Ruth Schultz said.

The sisters' effort in Marshfield represents how deep the national reckoning has spread from Confederate generals and segregationists to controversial sailors and saints whose names and statues adorn Catholic schools in every corner of the country.

By July 6 the petition had garnered 836 signatures, and the sisters said they received positive feedback from other alumni and students, especially those of color.

"We're taught to love everyone as Catholics, and Columbus obviously did not do that," Ella Schultz said, pointing to Columbus’s brutal treatment and enslavement of the Taíno people on Hispaniola under his colonial rule there in the late 15th century. 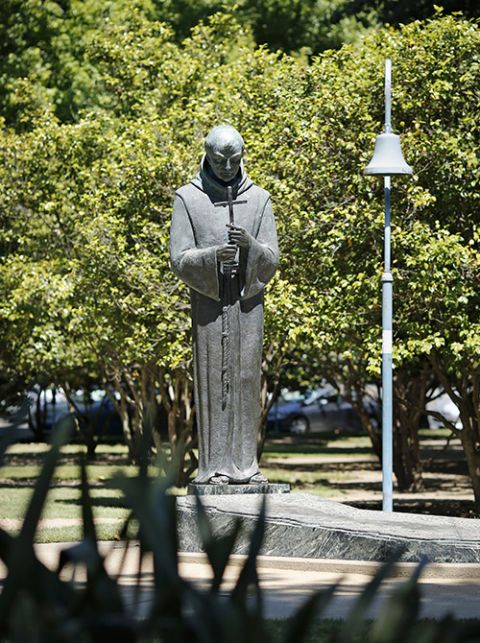 A statue of St. Junipero Serra in Sacramento, California, is seen in this 2015 file photo. It was torn down by a group of demonstrators late July 4. (CNS/Nancy Wiechec)

However, Columbus was also a devout Catholic and the inspiration for the Knights of Columbus, the Catholic fraternal organization whose donations to the school in the early 1900s are behind the school’s name.

The school’s president, David Eaton pointed to that history in a mid-June letter to the school community announcing the name and statue would stay.

"Those who chose the name likely did so more to honor the help and legacy of the Knights of Columbus than to honor Columbus the man," he wrote.

Even if the names and statues are staying on the grounds of Catholic schools in Marshfield and around the country, there are, nonetheless, signs that a fundamental shift in the way Catholic schools are teaching about the men that guard their entry ways is taking place.

St. Junípero Serra exemplifies the national debate's Catholic context like no other.

"Serra is California’s Columbus," said Steven Hackel, an historian at University of California, Riverside, who has written a book on Serra.

Native Californians long opposed honoring Serra and lobbied against his 2015 canonization, but in the past two months alone statues of the 18th century Franciscan have been removed by protesters in Los Angeles, San Francisco and Sacramento. There are efforts all over the state to have others removed legally.

Serra was fervently devout and dedicated his life to evangelization of natives in what is today Mexico and California, founding nine missions from San Diego to San Francisco.

Yet, the mission system Serra helped build relied on forced labor and harsh punishment of native Californians. Even French and English contemporaries regarded it as slavery.

Hackel, who has extensively researched mission records, said that they were extremely deadly places for native people with dramatic mortality rates even for the period.

"Given the nature of the legacy of the California missions … the cultural oppression, the demographic decline, the insensitivity of missionaries toward native people," he said, "I think it’s appropriate to remove those statues." 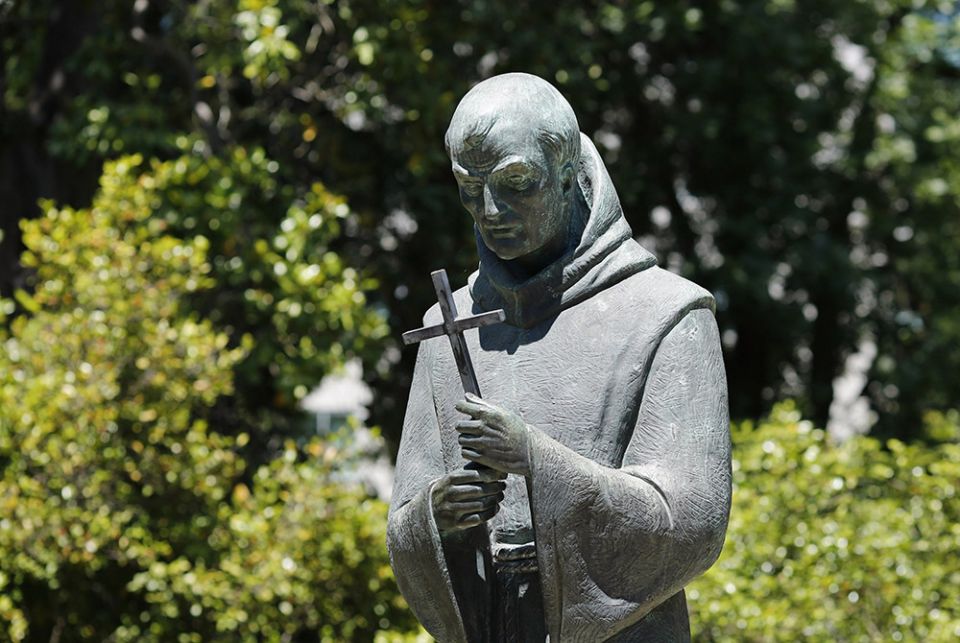 A statue of St. Junipero Serra in Sacramento, California, is seen in this 2015 file photo. It was torn down by a group of demonstrators late July 4. (CNS/Nancy Wiechec)

Diana Terrazas, 40, agrees. She grew up going to Catholic school and now has a daughter, 9, and a son, 5, in Catholic elementary school in the Archdiocese of Los Angeles.

Terrazas is Paiute, a tribe native to California, and feels she was not taught objectively about the foundation of the church in California and is still shocked by some of the things her children are taught. Worksheets refer to native Californians in the past tense and fourth-graders still build a mission diorama, a project many California public schools nixed in recent years.

For her, Serra’s statues and name on educational institutions are emblematic of the church’s broader failure to truthfully educate about its history in California.

In a June 22 statement, the California Conference of Catholic Bishops affirmed its support for civil rights protests across the country but criticized protesters for pulling down Serra’s statues, saying that the missionary defended native peoples from Spanish military authorities.

Rich Meyer, the president of JSerra Catholic High School in Orange County, California, one of at least four Catholic high schools nationwide named for the saint, echoed the bishops' defense of Serra’s historical record and said there are no plans to change the name.

"I take a tremendous amount of pride from saying he is our patron," he said. "Here is a man who is seeking to bring the gospel message to folks, to a people, and his intentions were rooted in love."

The school’s administration has never received complaints about the name, but every year, incoming freshmen at JSerra learn about the missionary including some of the controversy that surrounds him. It would be "intellectually dishonest" not to, Meyer said. 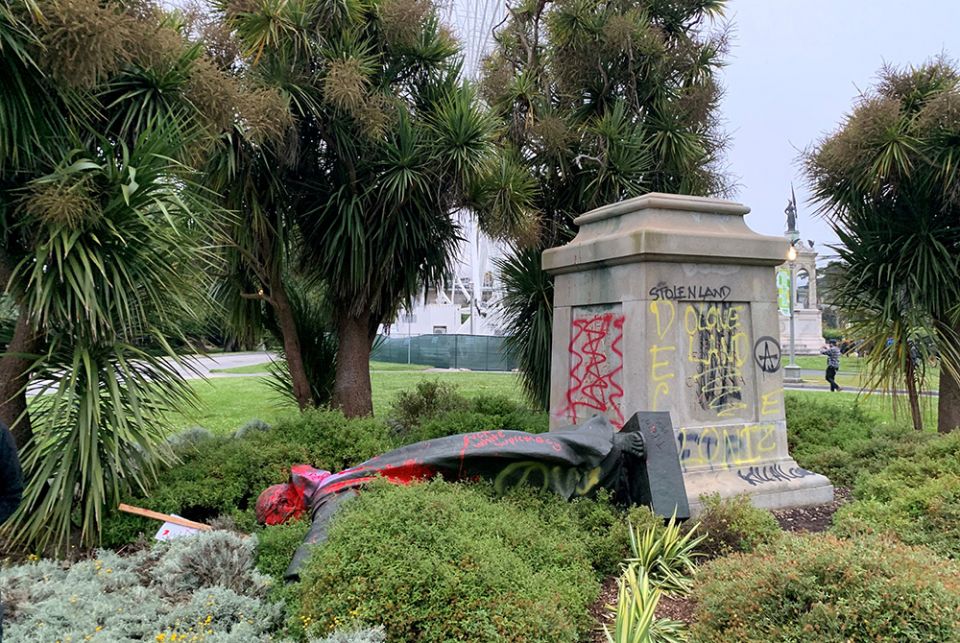 But a recent controversy at the University of San Diego provides, perhaps, a middle way for navigating the name debate.

Students at USD campaigned for years to have Serra’s name removed from a dorm with the most recent push starting in 2015.

Perse Lewis, USD’s tribal liaison since 2014 and a member of the Yomba Shoshone Tribe, said that at first the administration did not want to touch the issue because Serra had just become a saint.

In 2017 Lewis worked with a like-minded administrator to set up a process to rename a variety of campus spaces.

"The students just did not let Serra Hall go. They kept on pushing in our meetings until it just got to a point where the president saw it couldn’t be ignored anymore," Lewis said.

In spring of 2019 USD changed the name of the dorm to Sts. Tekakwitha and Serra Hall, to include the name of the first Native American saint. The names of six other campus spaces were changed as well, including one to a name in the local Kumeyaay language.

The greater impact of the campaign against the name, Lewis said, is that it started a campus-wide conversation, educated students about native Californians and led to greater inclusion of native voices in the classroom.

Back in Marshfield, a similar process is beginning.

While Ruth and Ella Schultz still disagree with Columbus Catholic’s President David Eaton over the name and statue, all three agree that the school needs to reevaluate what it teaches.

Alumni pushing the petition and administrators have met twice and intend to continue to meet about including more authors of color in the curriculum and increasing student’s exposure to Catholic social teaching.

"Those conversations quite honestly, and what we ultimately do in the classrooms with Catholic social teaching, to me, is more impactful long-term than what we do with a statue or a name," Eaton said.

This story appeared in the July 24-Aug 6, 2020 print issue under the headline: The 'tipping point' is here .

Could what happened in Delphi happen in Rome?

In time of crisis, church must be renewed, US archbishop says