Cupich: Catholics are not scandalized by Pope Francis 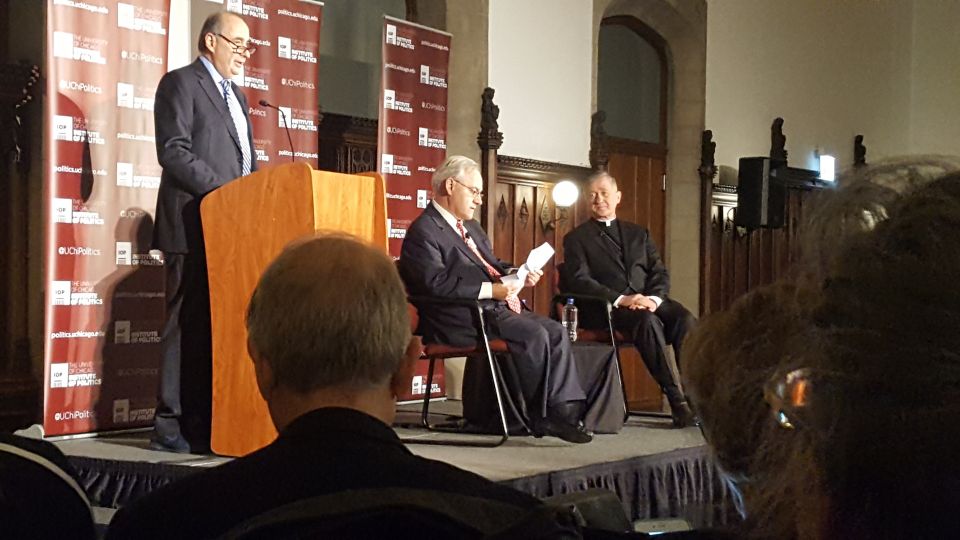 Contradicting the criticisms of some conservative Catholic commentators, Chicago Cardinal Blase Cupich defended Pope Francis, whom he called "one of the most popular people on the planet."

"I don't think people are scandalized by the pope. I think they're being told to be scandalized. I think there's a difference," Cupich said Nov. 6 at a public conversation with Washington Post columnist E.J. Dionne at the University of Chicago's Institute of Politics.

Cupich's comments were in response to a question from Dionne about Capuchin Fr. Thomas Weinandy, who recently made public a letter criticizing the pope for creating "chronic confusion" among Catholics.

Weinandy, former head of the U.S. bishops' Secretariat of Doctrine, subsequently resigned as a consultant to that committee, and the president of the bishops' conference released a statement affirming "strong unity with and loyalty to the Holy Father."

In his visits to Chicago parishes, Cupich said he finds Catholics are happy with Pope Francis, because he speaks to their everyday lives and has a pastoral approach that allows the shepherd sometimes to be led by the sheep.

The pope is "calling people to have an adult spirituality, rather than being infantilized in their spirituality," Cupich said to applause. "For people who like to tell other people what to do, that's threatening."

In Amoris Laetitia, the apostolic exhortation on marriage and the family, Pope Francis encouraged pastors to guide Catholics' consciences, not replace them. The church then accompanies people in their decision-making, rather than dictating to them, Cupich said.

"That sums up a lot of what people have difficulty with," he said. "He's trying to get people to have the interior freedom in their life to take responsibility for their life as they move forward.  That's a game changer."

Cupich also praised what he called the pope's "consistent ethic of solidarity."

"The problem we're facing now isn't that we're divided over issues, but people are divided into tribes, into camps."

"The problem we're facing now isn't that we're divided over issues, but people are divided into tribes, into camps," he said. "We need to recapture, before we get to the issues, that common bond."

The real challenge is libertarianism, which sees the human person only as a producer and consumer of goods and services, Cupich said, adding that politics then is about maximizing market freedom and individual choice.

Instead, a person of solidarity seeks common good.

"We have to speak about the impact that libertarianism has on dividing us," he said. "Because at its essence is not human solidarity, but how I achieve my individual goals. That's where the debate has to happen."

In response to a later question from a student who said he was pro-choice, Cupich defended the church's pro-life position, noting that he also supports prenatal and postnatal care. "But don't forget the baby," he said.

Cupich also praised young Catholics and Latino Catholics, calling them both "gifts to the church."

Younger Catholics "are not a problem," he said, despite rising numbers of millennials who have given up organized religion. Instead, they have "something to offer us," rather than just the other way around, Cupich said.

"I'm not ready to push the panic button," he said, advising parents and grandparents worried about the next generation to share why they value the church with young people.

"We have to engage [young people] at the level of saying, 'We really need you. You're going to be a great benefit to our own carrying on the mission of Jesus,' " Cupich said. But "spirituality can't be lived only by itself in isolation. It needs a community life. How can we engage them in that community life?"

He also called for comprehensive immigration reform. "It's not about whether we're going to build a wall or what we're doing with DACA students," he said. "We're dancing around the issue."

The event at the University of Chicago came one day after the shooting at a church in Texas that left 26 dead and 20 wounded. Cupich said mourning the loss of life is not enough, that the U.S. has to take action against the high-powered weapons like the one used in the Texas shooting.

"We don't need military weapons in our society," he told local media after the event. "We're not supposed to be at war with one another. Let's make sure that we don't have weapons that declare war on each other."

But gun control laws have not been enacted because guns are a lucrative business, he said. "Let's not be naïve about it: This is a money issue," he said. "It's nothing about the Second Amendment."

Cupich has already banned guns in archdiocesan churches, but said he would not add additional security, such as metal detectors, which would result in some loss of "the character of our places of worship," he said.

He also rejects the suggestion that worshipers bringing guns to church is the answer.

"That would only perpetuate a faulty premise that we need to be armed to protect ourselves," he said. "Let's get rid of the weapons."

People | Cupich: Catholics are not scandalized by Pope Francis

The gifts of women en route to Rome

Bernard Law, a cardinal of scandal and disgrace

Closed hearts unable to be surprised by the Resurrection, pope says

Pope's quotes: Of which we are made