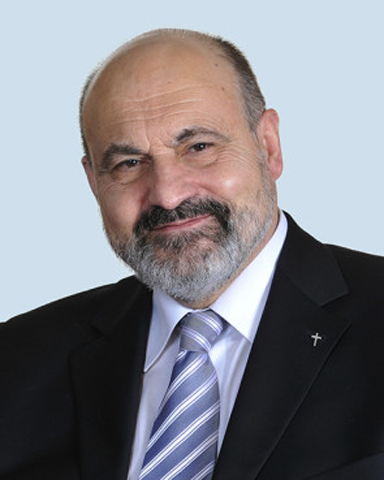 Tomas Halik, a Roman Catholic priest and philosopher, onetime Czech political activist and an advocate for religious freedom and interfaith dialogue, won the 2014 Templeton Prize on Thursday for religious and spiritual progress.

Halik, 65, a convert to Catholicism whose influences include religious figures such as Mother Teresa and author Graham Greene, has in recent years been increasingly active in building bridges between people of different faiths and between those who claim a religious tradition and those who do not.

Saying he dislikes dogmatic figures on either end of the religious spectrum, Halik said his work is aimed at "seekers," the segment of those asking questions about religious and spiritual issues but unaffiliated with religion or atheism.

"Let it be said over and over again: faith is not a question of problems but of mystery," Halik said in a statement issued by the John Templeton Foundation, based in West Conshohocken, Pa.

"We must never abandon the path of seeking and asking," he said. "A problem can be solved once forever. Mystery -- unlike problems -- cannot be overcome. Mystery invites us to try to understand it again and again, to go deeper and deeper."

He added: "Believers and unbelievers are not two clearly separate groups like two soccer teams. The playing field for the contest between belief and unbelief is within each individual human heart and human mind."

Halik has taught the sociology of religion at Charles University in Prague since 1997. He has authored numerous books, with a number focusing on dialogue between atheists and those grounded in a particular religious tradition. One of his books, Patience With God, was named the European Theological Book of 2009-10.

In an interview from London on Wednesday, Halik said he admires Greene, the author of such novels as The Power and the Glory and Brighton Rock, because the British writer saw "Christianity not as a set of dogmatic issues," but as something of "the drama of life -- faith as part of the life story."

"Christianity incarnated is the human story, the drama of sin and grace," Halik said. "There is something dynamic about it, and (religious) faith is more a 'way' than a fortress," he added. "It is not a rock, it's a river."

Noting that the announcement of his winning the Templeton comes a year to the day that Jorge Mario Bergoglio was named Pope Francis, Halik said he feels great kinship with the current pontiff, in part because of Francis' commitment to dialogue between believers and nonbelievers.

John M. Templeton Jr., the president and chairman of the John Templeton Foundation, praised Halik as a gifted spiritual leader whose work both before and after the 1989 Czech "Velvet Revolution" spoke to expansive truths.

The prize, valued at about $1.8 million, is one of the largest awards given annually to a single individual. Founded in 1972, the award honors a living person "who has made exceptional contributions to affirming life's spiritual dimension, whether through insight, discovery, or practical works."

Halik joins a long line of Templeton laureates across four decades. The first was Mother Teresa, who received the prize in 1973. Other recipients have included the Rev. Billy Graham, in 1982, and Alexander Solzhenitsyn, in 1983. The two most recent winners were Nobel Peace Prize laureates Desmond Tutu in 2013, and the Dalai Lama in 2012.

A version of this story appeared in the March 28-April 10, 2014 print issue under the headline: Czech priest, philosopher wins 2014 Templeton Prize.