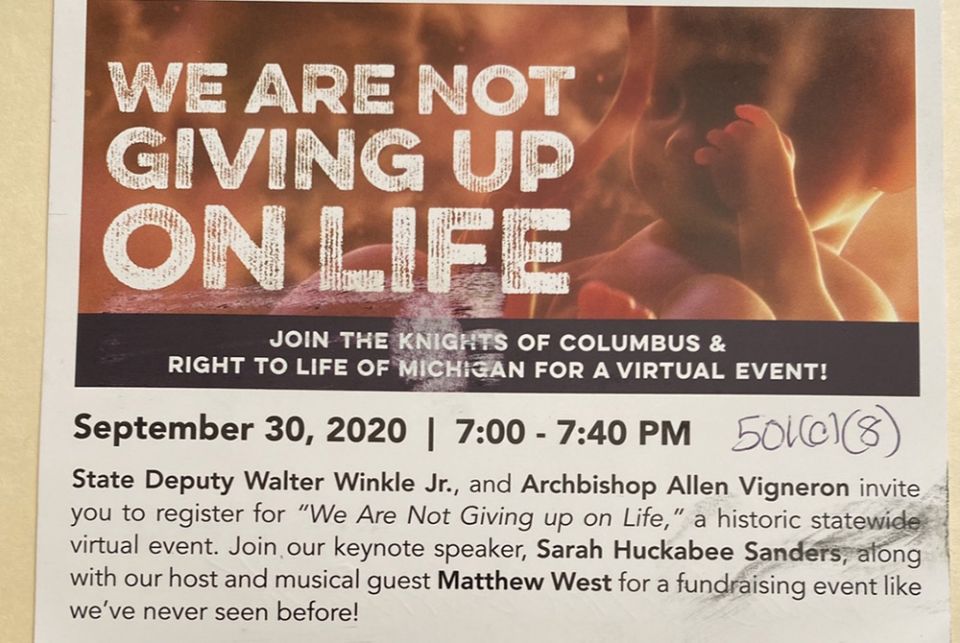 Archbishop Allen Vigneron of Detroit, who also serves as vice president of the U.S. Catholic bishops' conference, offered the opening prayer for a Sept. 30 virtual fundraising event for Right to Life of Michigan, during which the organization offered an endorsement of President Donald Trump's reelection bid.

Postcard mailers for the "We Are Not Giving Up On Life" online presentation, obtained by NCR, stated they were also sent on behalf of the archbishop and the Knights of Columbus State Deputy Walter Winkle, raising concerns among some recipients about the tax-exempt status of the Knights of Columbus chapter that prohibits engaging in political activity. 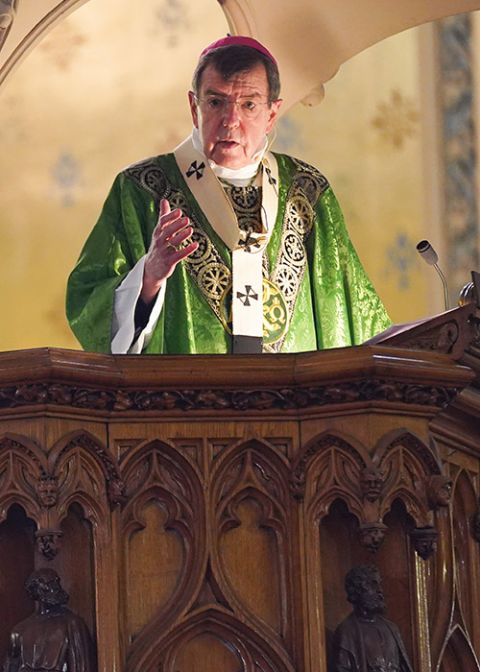 Vigneron's spokesperson told NCR that the archbishop had originally been slated to offer the prayer as a guest to the in-person fundraising gala last spring. She said the event was later switched to a virtual format due to the pandemic and was unaware that the event would endorse a candidate. The Knights of Columbus also denied that the participation in the event was an endorsement of a political candidate.

The postcards "were not designed, reviewed, or approved by the Archbishop or the Archdiocese of Detroit," wrote Holly Fournier, associate director of communications for the archdiocese, in an email to NCR. "The Archdiocese of Detroit, led by the Archbishop, neither endorses nor opposes candidates or parties, because no politician, political party, or platform aligns perfectly with the Gospel."

Winkle, in an email to NCR said, "Our mailing was in solidarity to the Archbishop of Detroit and the ProLife Cause," adding that the partnership with Right to Life of Michigan was due to "our common beliefs."

The event was co-sponsored by the Michigan Knights of Columbus, a state chapter of the Catholic fraternal organization, and included a keynote address from former White House press secretary Sarah Huckabee Sanders who served in the Trump administration from 2017-2019. 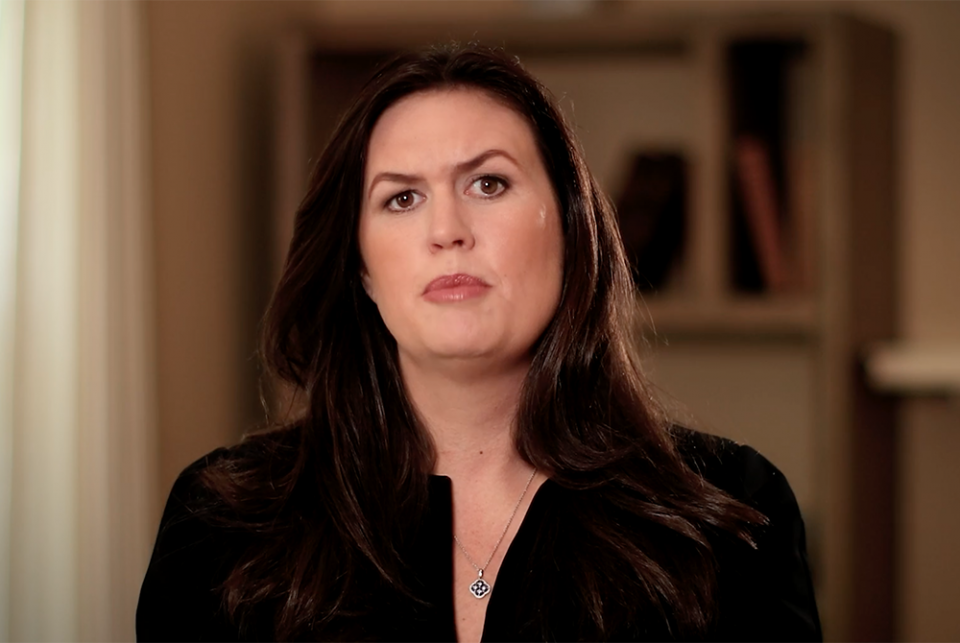 Sarah Huckabee Sanders gives a keynote address during the "We Are Not Giving Up On Life" virtual fundraising event for Right to Life of Michigan (NCR screenshot/Notgivinguponlife.org)

During the 40-minute fundraiser, Sanders said, "We are facing one of the most consequential elections of our lifetime. Never has there been a greater contrast between two candidates, two belief systems, two value systems, two ideologies. We have to stand together."

She said this is "one of the most consequential elections for the pro-life movement," and argued that in Trump, the pro-life community has "a fighter for life," or the choice in Biden of someone "who is willing to allow people to take it [human life] for no reason at all."

"We've never had a president who has stood up for the pro-life community the way Donald Trump has. In contrast, if Joe Biden were to be elected, we would never have had a more pro-abortion president than we would have in him," said Sanders. "If nothing else, on that issue alone, that should motivate conservatives, that should motivate Christians who believe that life still matters to get out to vote."

She encouraged attendees to knock on doors and "write the biggest check you can," as "the rest of the country is counting on" Michigan.

The event page for the "We Are Not Giving Up On Life" virtual fundraising event for Right to Life of Michigan (NCR screenshot/Notgivinguponlife.org)

"If anyone has had to stand up and hold their ground and affirm human dignity against all odds, it's our speaker tonight," he said.

Brian Cusack, the director of development for Right to Life Michigan, told viewers that "if we can reelect our pro-life president, we could see a reversal of Roe v. Wade literally in the next two to three years."

He said that the goal of the event was to raise $1 million, which would go toward the organization's political action committee that is supporting Trump and Michigan Republican Senate candidate John Edward James.

"The road to the White House leads directly through Michigan," he told attendees. 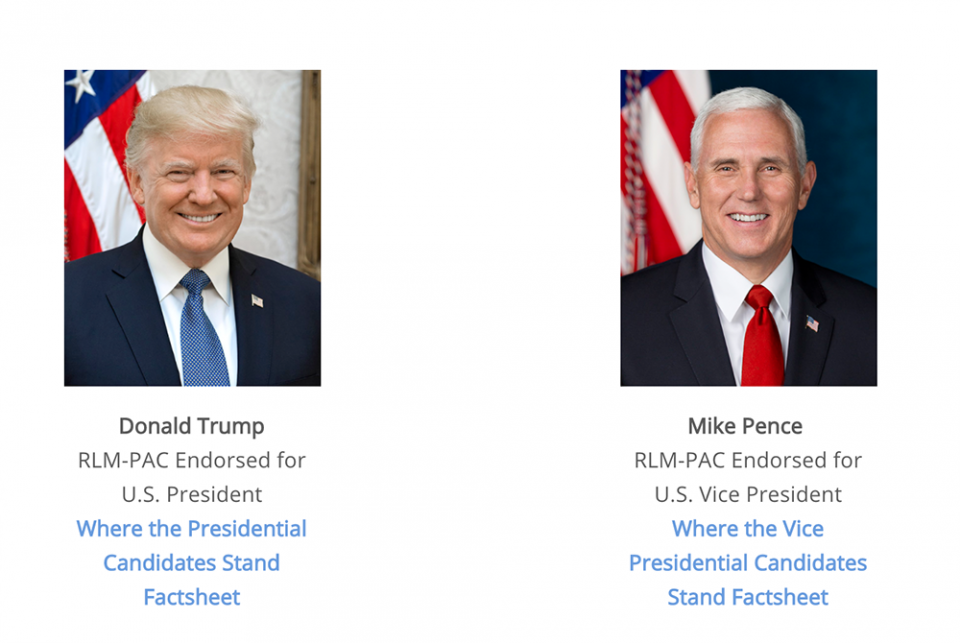 The endorsements page of the Right to Life of Michigan website (NCR screenshot/Rtl.org)

At the conclusion of the event, Winkle announced that the Michigan Knights of Columbus would be donating $25,000 to Right to Life of Michigan and encouraged other Knights to make personal contributions to the organization.

He told NCR via email that "we have always supported the ProLife cause and like the National Right to Life March in Washington DC, the Knights of Columbus have always been involved with such efforts for years. It is the teaching of the Catholic Church that unites us to the Right to Life of Michigan, not politics. The money we donated that night as well as any other time, is for the educational fund as noted in the memo line."

Robert Anderson, a member of the Michigan Knights of Columbus and a donor of the Right to Life of Michigan, told NCR that he sent letters to both Vigneron and Winkle warning that participating in the event could jeopardize their tax-exempt status.

The letters were sent on Sept. 24, and Anderson told NCR he has yet to receive a response.

"Ordinarily, I would be happy to attend a pro-life event sponsored by the Knights, as I have in the past," wrote Anderson, adding that he has been a "proud member of Council 689 of the Knights for 34 years."

Despite its charitable work, in recent years the Knights of Columbus has come under scrutiny for its partisan political activities. Most recently, in May, some of its members were outraged when Trump and First Lady Melania Trump appeared at the Knights of Columbus-owned St. John Paul II National Shrine in Washington, D.C., for a photo op the day after he used tear gas to clear out peaceful protestors for a photo op in front of St. John's Episcopal Church.

"I am very worried and concerned about the uptick in these partisan interventions, which divide the Knights of Columbus, divides the Catholic church and other people of faith," Anderson told NCR.

He said that there has been an "unfortunate increase in polarization" in the country and events such as the one this week only "further divide us."

"We need to have our leaders stay out of partisan politics," said Anderson.