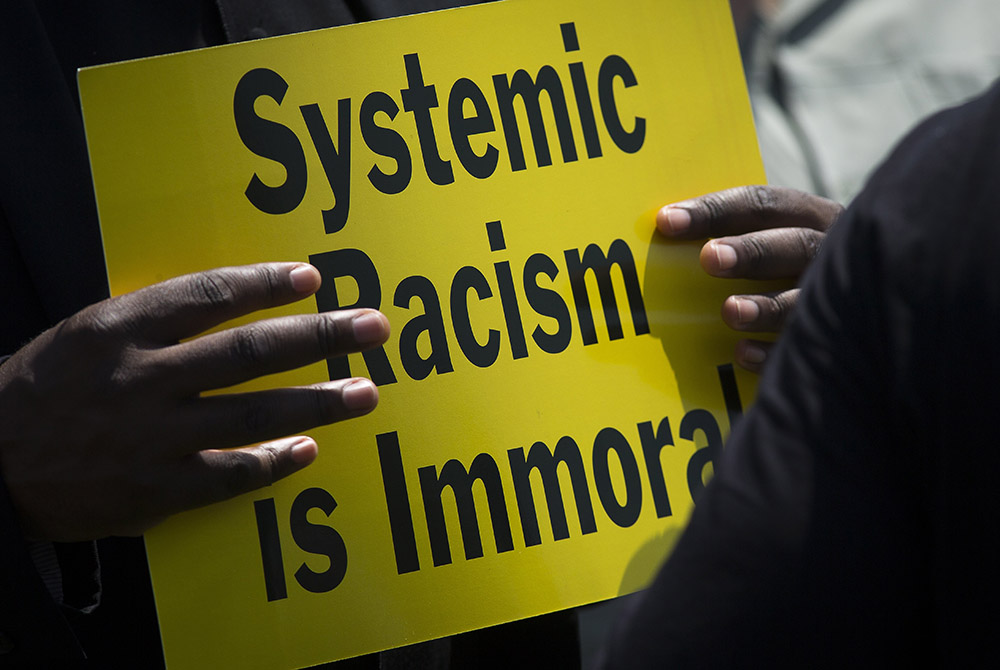 A protester is seen near the Capitol in Washington May 21, 2018, during an anti-racism demonstration. In remarks Nov. 16, during the U.S. bishops' virtual fall meeting, Deborah Amato, National Advisory Council chair, urged the bishops to continue to look at roots of racism and to offer opportunities for listening and dialoguing about it. (CNS/Tyler Orsburn)

The dividing line of race is old as our democracy, and as enduring as evidence from the presidential election. After four years of watching President Donald Trump demonize Muslims, enact cruel policies that target migrants, refuse to clearly condemn white supremacists, and disparage the Black Lives Matter movement, white Christians stuck with Trump in large numbers.

Race and ethnicity continue to eclipse religion as a driver of voting patterns. According to preliminary data from AP Votecast, more than half of white Catholics (57%) voted for Trump, compared to 67% of Latino Catholics who supported Biden.

There is some positive emerging news. Trump's national support among white Catholics declined from the 60% who supported him in 2016. Biden's ability to cut into Trump's appeal with white Catholics in key states such as Pennsylvania, Michigan and Wisconsin played an important role in flipping those battlegrounds back to blue after Hillary Clinton lost all three states in 2016.

And there is data that points to white Catholics grappling with systemic racism more than in the past. While seven in 10 white evangelicals say that the police killing of African American men are isolated incidents rather than part of a pattern, the proportion of white Catholics who agree with that dropped 13 percentage points — from 71% in 2015 to 56% in 2020, according to Public Religion Research Institute, or PRRI.

But we should have higher expectations for white Catholics who read the same gospels and have access to the same Catholic social teaching as our fellow Black and Latino Catholics. More than half of white Catholics still think police violence against people of color is simply about a few cops who are bad apples. More than half still voted for a president who consistently stoked race-based fear and white backlash.

At a deeper level, this isn't simply about individual political choices, but a profound indictment of Catholic institutions' failure to help form consciences. Truth and reconciliation first require acknowledging the reality in front of our faces. Catholic schools, media, seminaries and other institutions must do some painful soul-searching when it comes to the persistence of racism in our church, political formation and cultural assumptions. White Catholics seem more likely to absorb right-wing spin from Fox News pundits than church teaching on racism and social sin.

The fact that the more frequently you attend church, the more likely you were to support a president who energizes white supremacists and hate groups illuminates the challenge facing white Christian institutions. Fifty-nine percent of voters who attend religious services at least monthly supported Trump, compared to 41% who attended less frequently, according to data from AP Votecast. In pre-election data from PRRI, 58% of white Catholics who attended weekly services approved of Trump's job performance, compared to less than half (41%) of Hispanic weekly attenders.

The fact that the more frequently you attend church, the more likely you were to support a president who energizes white supremacists and hate groups illuminates the challenge facing white Christian institutions.

It's important to note that exit polls and post-election data are still preliminary. In a year when nothing was typical about voting during a pandemic, we should be cautious not to draw sweeping conclusions. The fact that in some cases Trump performed better with voters of color than he did in 2016 points to the complexities of voting patterns, challenges of forming progressive coalitions, and the reality that demographics are not always political destiny.

But "identity politics" — frequently disdained by the right even as many conservatives openly embrace the identity of white Christian nationalism — continues to be a potent force. Race is central to that political identity. As Robert Jones documents in his book, White Too Long: The Legacy of White Supremacy in American Christianity, Christian churches and institutions have long served as incubators that provide the cultural and theological justifications for white supremacy. During a recent panel discussion, Trump, Biden and the Future of Christian Nationalism, hosted by Fordham University's Center on Religion and Culture, Jones noted that even more than the divisive issue of abortion, the "primary cleavage between the two parties" now centers around race.

Eighty-two percent of Trump voters said racism in the United States was either a minor problem or not a problem at all, according to responses from exit poll questions, compared to 16% of Biden voters. The numbers were as equally stark when voters were asked about their opinions of the Black Lives Matter movement. Eighty-five percent of Trump voters had an unfavorable view, compared to 14% of Biden voters.

Panelist Eddie Glaude Jr., chair of the department of African American Studies at Princeton University and author of Begin Again: James Baldwin's America and Its Urgent Lessons for Our Own, said Obama's election opened up wells of white resentment and racism that some Americans thought had been drained dry by the election of the nation's first Black president.

"It's right to say there has been long-standing racism in the country, but the election of Obama exacerbated that in particular ways," Glaude said. "Trump is kind of the culmination of the reaction to Obama's election, and the demographic shifts that undergirded it." Glaude pointed specifically to religion. "We need to think about the ways whiteness is determining what it means to be a Christian," he said.

As we sift through election data and try to make sense of the last four years, there is a temptation to explain away Trump as an aberration, an embarrassing quirk. This is a mistake. Trump's political ambitions and ascent, which began with his birther attacks against Barack Obama, was always a manifestation of deeper ills: the long story of racist backlash to Black political power, the dark appeal of demagogues who exploit fear, and a nativist-flavored narrative of American exceptionalism. All of these must be confronted.

But for white Christians, our task is even more daunting and existential. How can a religion founded on the radical teaching of a dark-skinned Jew who lived on the peripheries of an empire be aligned with political candidates and ideologies anathema to the Gospel? Answering that question doesn't mean a Christian has to vote for Democrats. It does mean being honest about how many white voters and white Christian leaders, in the name of defending life in the womb, are willing to back political figures and movements infused with nativism, racism and exclusion.

It will take longer than four years to grapple with these questions and chart a better path forward, but since we're many decades behind, let's begin today.

Related: The assumptions of white privilege and what we can do about it
This story appears in the Election 2020 feature series. View the full series.