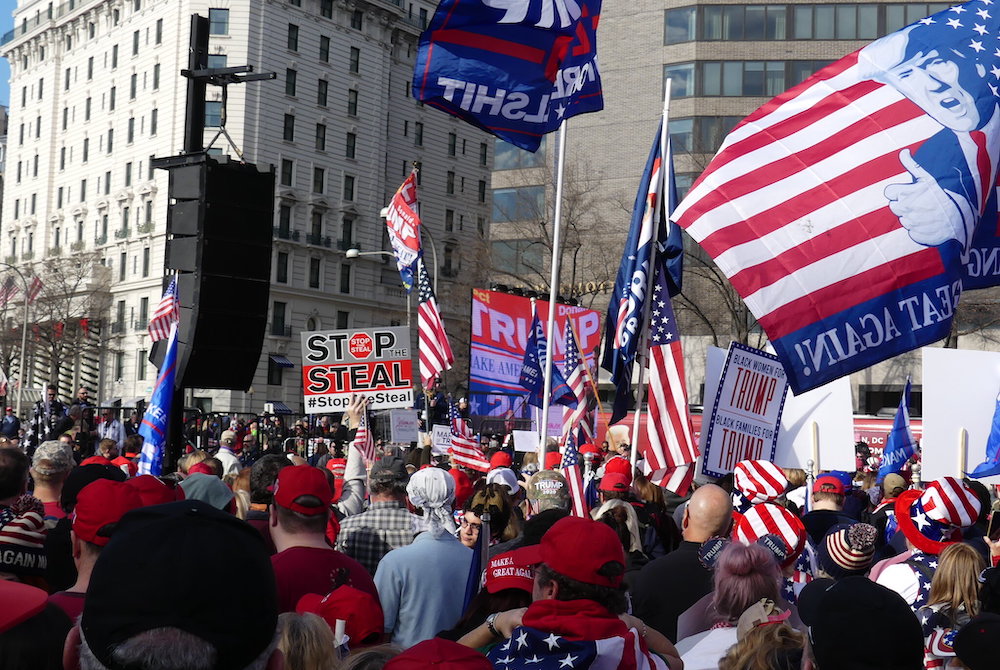 When thousands rallied in the nation's capital Dec. 12 with a conviction that the Nov. 3 election had been stolen from President Donald Trump, among those headlining the event were a Texas Catholic bishop, a former papal nuncio to the U.S., several priests and a prominent Catholic pro-life leader.

Four days later, the conservative advocacy organization Catholic Vote sent out an email under the headline "President-Suspect," saying that while Joe Biden is the president-elect "on paper … that means nothing until the votes cast by the electoral college are opened by a joint session of Congress on January 6."

Some conservative Catholics are joining evangelicals in casting doubt on the 2020 election results, but their suspicions are not widely shared with a number of leading Catholic scholars, public intellectuals and leaders.

During the week of Dec. 14, NCR reached out to more than 40 well-known Catholics across a range of political affiliations, backgrounds and professions. Among those who responded, all concurred that Biden is the president-elect, and on inauguration day on Jan. 20, will become the nation's 46th president.

Disagreements emerged, however, about whether Trump's repeated efforts calling into question the veracity of the election results and his refusal to concede presents serious threats to American democracy. A number of more conservative Catholics downplayed the damage to democracy, while other Catholics expressed more concern.

"Biden is president-elect, and I say it without reservations," Matthew Franck, associate director of the James Madison Program at Princeton University and a senior fellow at the Witherspoon Institute, told NCR via email.

Franck, a longtime conservative political scholar, said that Trump "has induced a great many citizens to mistrust the results of a free and fair election, while his own attorney general has said no evidence has come to light of fraud widespread enough to call those results into question."

George Weigel, distinguished senior fellow of the Ethics and Public Policy Center, told NCR that "of course Biden is the president-elect," but said Trump's refusal to accept the fact has been more damaging to his reputation than to democracy.

"What the past month has demonstrated is that America's core political institutions, aside from the two major political parties, are solid," Weigel said.

Robert Royal, president of the Faith and Reason Institute and an EWTN commentator, said that there is "no question" that Biden is president-elect but concurred with Weigel in his assessment that American democracy is not in peril.

"Trump talks a lot about many things. His opponents have always pretended that it all portends the end of the nation, if not the world," Royal told NCR. "I don't know if democracy dies in darkness, but American democracy won't die — and hasn't really been damaged — because the president has an itchy Twitter finger about campaign irregularities."

Jim Towey, former president of Ave Maria University who led the White House's Office of Faith-Based and Community Initiatives under President George W. Bush, said that he believes Biden is the president-elect but does not fault Trump for his ongoing legal challenges.

"While elections will never be perfect, our country should be scrupulous in maintaining electoral integrity, particularly as new technology changes how we vote and count votes, and vigorously prosecute individuals of either party who violate election laws so as to deter a future recurrence," he said.

"The events of the past six weeks, by themselves, do not raise much concern," Michael New, a political scientist at the Catholic University of America and a regular commentator for National Review Online, told NCR. "I think that most judges, including those appointed by Republican presidents, handled the legal challenges professionally and appropriately."

"In January, there will be a peaceful transition of power," he said, but added that he is concerned that American Democracy suffers from "increasing polarization of the two political parties and the outsized roles that the judiciary has taken on many public policy issues."

Mary Rice Hasson, director of the Catholic Women's Forum at the Ethics and Public Policy Center, said that as an attorney she believes Trump "has the right to pursue legal claims related to the election, including appeals of adverse rulings."

She said that recent Senate hearings included evidence of fraudulent voting in a number of states and that "trust will be restored by a transparent examination of facts, tightening up any processes that proved to be problematic, and letting the legal processes play out."

Joseph Bottum, former editor of First Things, said he was skeptical that Trump was damaging democracy, at least not any more so than former Vice President Al Gore's questioning of Florida's election results did in 2000.

"Democracy is more robust than one might imagine after hearing the overwrought on either side, and the claim of 'damaged democracy' turns out to be fairly cynical political posturing by those who hope to benefit their side in the democracy they claim is damaged," he said.

Those sentiments were matched by Notre Dame Law School professor and the director of the Church, State and Society program, Rick Garnett, who compared Trump's efforts to the "tiresome election-questioning" by Hillary Clinton in 2016 and "all those who purported to believe that 'the Russians' manipulated vote-counts in 2016."

"Trump's cynical, dishonest, and self-serving shenanigans, which appear to have more to do with raising money to pay down past campaign debts and with perpetuating a post-presidency personality-brand than with concerns about election integrity or accuracy, are unwelcome and insulting," he added via email. "Thankfully, our core institutions — including our courts — and our deep-seated commitments to the rule of law seem likely to prevent his antics from causing lasting damage." 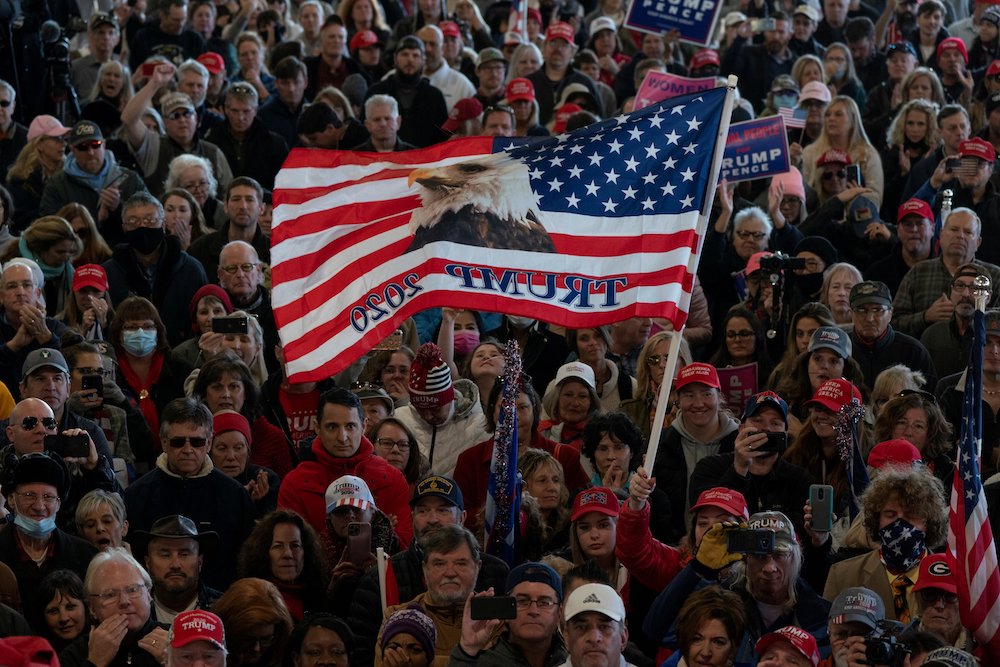 Other Catholics offered a starker assessment of the events of the last six weeks and what it could mean for American democracy and trust in its institutions.

David DeCosse, director of Religious and Catholic Ethics at the Markkula Center for Applied Ethics at Santa Clara University, told NCR that "the last weeks have only shown how baseless and corrupt the effort has been to deny this empirical reality" of Biden's election victory.

"What could be more anti-democratic than a deliberate, organized effort to overthrow the results of an election on the basis of no legitimate evidence whatsoever?" he asked. "This is exactly what wannabe tyrants around the world have always tried to do."

"Trump's effort has convinced millions of Americans that the election was fraudulent and that is a poison released into our system," DeCosse continued. "Trump's effort is also one more cynical instance of what political scientists have called 'competitive authoritarianism' in which norms and procedures of democracy (in this case, the pursuit of baseless claims in the courts) are used to undermine democracy."

Patricia McGuire, president of Trinity Washington University in Washington. D.C, said the president "has encouraged sedition, which is a revolt against legitimate authority in an effort to overthrow the government."

"This is not just some 'sore loser' hissy fit, but a profoundly serious assault on the structure of government and the role of the president of the United States," she added. "The ramifications are profound, since the refusal to accept the clear results of the election means that any losing candidate in the future might do the same, or worse, to seize and sustain power."

"During his acceptance speech after winning the GOP nomination for president, he told us "I alone can fix it," Gehring recalled to NCR, adding that  "over four years in the White House, he demonized journalists and independent media outlets, which are essential for the health of any democracy, as 'enemies of the people.' "

"I think the last four years have reminded us that we can't take the health of our democracy for granted," he continued. "Our democracy has been bruised, not broken. We can come out of this stronger if we recommit to the ideals of democracy and do the hard work that is needed to make those ideals realized."

Similarly, John Carr, director of the Initiative of Catholic Social Thought and Public Life at Georgetown University, said that "Trump and his advocates and enablers have convinced millions of Americans that they were cheated, that the new president is illegitimate, and that our democratic institutions have been subverted."

"This 'trauma'  is creating deep wounds in our nation. This 'stress' is ongoing and undermining trust in the institutions of American democracy," Carr told NCR, adding that this will not go away at the conclusion of Trump's presidency but "will haunt our national life for years to come and make it far more difficult to advance the common good in a bitterly divided democracy."

Chairman of the department of Religious Education and Pastoral Ministry at Boston College, Hosffman Ospino, told NCR he believes "every citizen of this country, including the president, has the right to ask questions to ensure transparency of our political processes, but the questions must be right and honest."

Trump, said Ospino, "needs to have a frank conversation with his supporters, acknowledging that he fought the good fight, and lost. Now it's time to work with the next administration because the nation and its people are more important than one's ego."

"The question for us as we move forward as a nation is simple," he continued. "Do we allow what we have seen this far to continue its fateful course and brace for something worse, or choose to reverse destructive trends by committing to long-term efforts of civic education and community building sustained by shared values? I choose the latter."

As to how the nation begins to move forward, two respondents said that Pope Francis offers insight applicable to the current moment.

Dylan Corbett, director of the Hope Border Institute, said that in his new book Let Us Dream, Francis identifies the problem of the "isolated conscience of the beleaguered self."

"The only antidote and the only way to escape the pattern of claim and counterclaim, the pope says, is to renounce self-sufficiency and arrogance, after the pattern of the Word of God, and lower ourselves in service, 'making room for the action of God to unite us.' "

Similarly, DeCosse pointed to Francis' recent encyclical Fratelli Tutti and its message of the need for human fraternity as instructive to the present moment in U.S. political life.

"I think this is a moment for Catholicism to revisit its commitment to democracy as an expression of equal human dignity in a world of great difference," he said. "I think it's also a moment for the Catholic Church in the United States to focus on its role as a sacrament of the unity of all as a way to foster in American culture the virtues of truth-telling and reconciling love without which democracy cannot succeed."

This story appears in the Election 2020 feature series. View the full series.
A version of this story appeared in the Jan 8-21, 2021 print issue under the headline: Catholics, for the most part, accept election results.