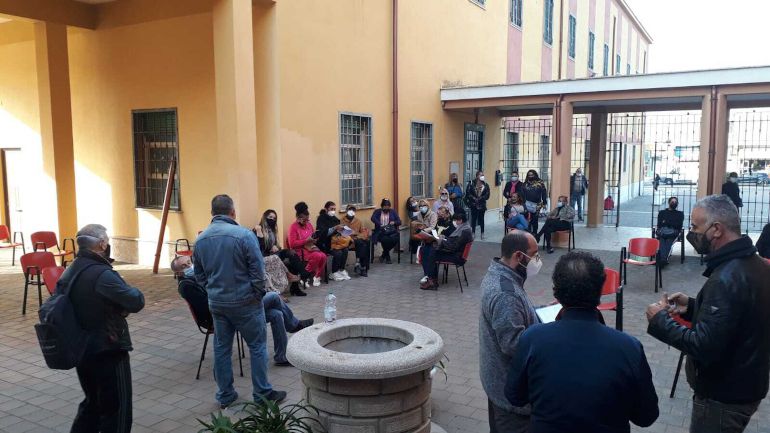 Members of a faith community from Torvaianica, Italy, including transgender individuals, volunteers and others, were invited to the Vatican to receive the COVID-19 vaccine. (Photo by Fr. Andrea Canocchia)

Vatican City — The day before Easter this year, a group of transgender people came to the Vatican at the invitation of Pope Francis to receive the COVID-19 vaccine, according to an official who oversees the pope's charitable works.

Cardinal Konrad Krajewski, the papal almoner, confirmed in a phone interview that about 50 individuals arrived at the Vatican on buses on April 3 from a parish in Torvaianica, near Rome, where Fr. Andrea Conocchia has been ministering to a transgender community for several years. On April 24, the group returned for their second shot.

It has already been reported that Francis had asked Krajewski last year to provide food and financial support to members of the community who were struggling without work due to the pandemic. But as Easter approached this year, Krajewski reached out to Conocchia, suggesting that he bring the transgender individuals under his care to the Vatican to be vaccinated.

"It was truly Easter," Conocchia told RNS on July 2, calling the occasion "a day of life and resurrection" for his community.

The group also included volunteers working at Conocchia's parish, as well as immigrants and refugees under the care of the Community of St. Egidio, a Catholic aid organization, as well as struggling families and divorced parents supported by the Catholic charity Caritas.

Juan Carlos Cruz, a clerical sex abuse survivor and activist who was appointed last March by Francis as a member of the Pontifical Commission for the Protection of Minors, told RNS on July 1 that when the two buses from Torvaianica arrived saying they had been invited to be vaccinated, Vatican officials called the pope for guidance.

"Absolutely vaccinate them!" Francis said, according to Cruz, who also said that the pontiff had the sensitivity to tell Vatican employees "to ask for their names, ask for anything they need, but do not ask them about their sex."

The group was taken to the Paul VI Audience Hall, where they received their first dose of the vaccine.

The transgender men and women reacted with "surprise" and "emotion" to the experience of entering the Vatican for the vaccination, Conocchia said, adding that many of them are undocumented and unable to access Italy's free health care services.

"They were moved to tears and felt remembered, having experienced once again and in a tangible way the closeness and tenderness of the pope’s charity," he said.

Francis has reached out in support of the trans community before. In August 2020, he sent a letter supporting the work of Sister Mónica Astorga Cremonaof the Discalced Carmelite Nuns in Argentina, who had opened a safe home for transexual women in the face of opposition from her diocese and the local Catholic community.

The pope also described his meeting with a Spanish transgender man he had invited to the Vatican in 2014 after reading a letter from him describing the hostility he faced from members of the clergy because of his sexual identity.

"He wrote me a letter saying that, for him, it would be a consolation to come (see me) with his wife," the pope said during an inflight press conference while returning from his 2015 visit to Georgia and Azerbaijan.

"Life is life and you must take things as they come," the pope continued, stressing that each situation is unique and must be welcomed, accompanied, studied, discerned and integrated.

"This is what Jesus would do today," Francis said.

While the pope has made several efforts to show his personal welcoming and outreach to members of the transgender community, he has also been critical of gender theory, stating that teaching it in school is a form of "cultural colonization" and calling it a "great enemy" of marriage.

For Conocchia, the closeness of Francis proves that "the church is a part of the people, whoever they are. For us they have value. They are a noun, not an adjective."