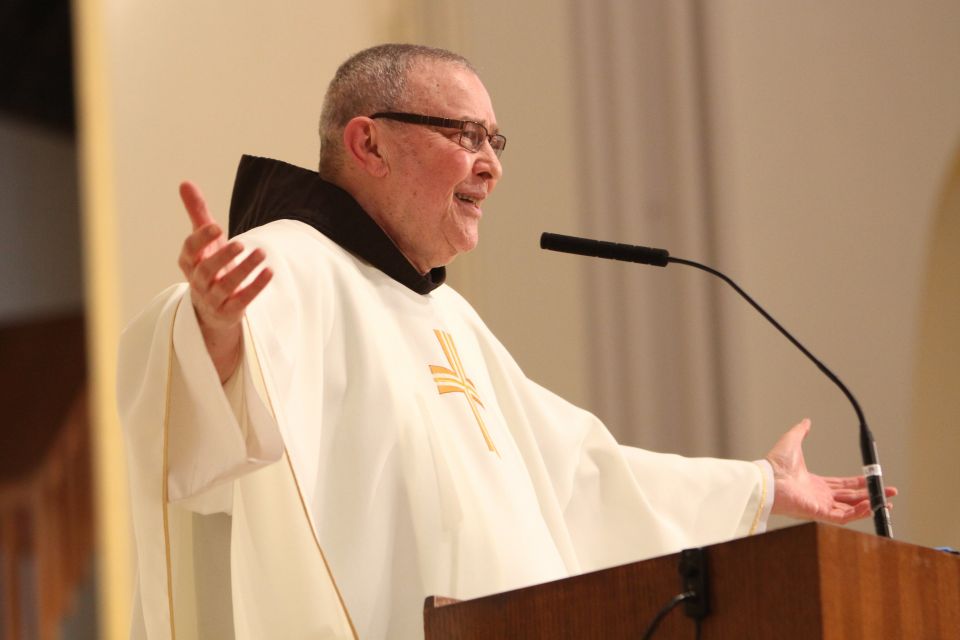 NEW YORK —Franciscan Father James E. Goode, whose evangelizing work among Black Catholics became known throughout the United States and earned him the title "dean of Black Catholic preachers," died in his sleep March 4 in New York. He was 81.

According to the Franciscan Province of the Immaculate Conception in Manhattan, Father Goode, who was a member of the province, had been seriously ill for some time. He most recently resided at Mary Manning Walsh Home in Manhattan.

When Father Goode preached at his first Black Catholic revival in 1974 in the Archdiocese of Chicago, it began a ministry that led to him preaching at more than 300 revivals and convocations throughout his lifetime.

At one point, Father Goode joined the Rev. Jesse Jackson as they preached during Black American Voices in Rome, an event sponsored by the Vatican and the city of Rome.

His evangelistic style was so respected and well known that he was featured in an episode of "60 Minutes."

In 1989, Father Goode founded the National Day of Prayer for the African-American Family, which is celebrated on the first Sunday of Black History Month, which is observed in February.

Beyond his work within parish life, Father Goode was director for many years of Solid Ground Ministry at St. Clare Friary in Manhattan, a Franciscan ministry among Black families in New York. His role found him reaching out to homeless, poor and sick people, assisting people living with HIV and restoring hope to victims of violence, neglect and abuse through counseling.

The U.S. House of Representatives honored Father Goode in 2001 with a resolution that acknowledged his preaching ministry as well has work for social justice and peace and support for Black families.

Born Nov. 18, 1940, in Roanoke, Virginia, Father Goode was adopted by Robert and Lula Young at 3 months of age. He attended Roanoke Catholic High School and then enlisted in the U.S. Air Force.

Afterward, he attended Holy Apostles Seminary in Connecticut and later was admitted into the formation program of the Franciscan Province of the Immaculate Conception in Troy, New York. He studied theology at St. Anthony-on-the-Hudson Seminary in Rensselaer, New York. He professed solemn vows as a Franciscan in 1973.

Father Goode was ordained May 13, 1972, at St. Anthony of Padua Church in Manhattan, becoming the first Black Catholic priest from Roanoke. His first assignment was as a faculty member at Serra High School in McKeesport, Pennsylvania. Later he served as pastor of St. Paul of the Shipwreck Parish in San Francisco.

He was the founding pastor of the Faith Community of Black Catholics at Our Lady of Charity Parish in the Diocese of Brooklyn, New York. Under his leadership he helped build the declining parish into a vibrant Black Catholic faith community that became a model for Black Catholic worship, education, community outreach and ecumenism.

Beyond his work within the Catholic Church, Father Goode was involved as a community leader. He served as an elected member of the New York City Community School Board in District 16 for two terms.

A funeral Mass was scheduled to be celebrated March 12 at St. Anthony of Padua Church in New York. Burial will be in Roanoke.