Haiti's first cardinal: 'Great strides have been made in the country' 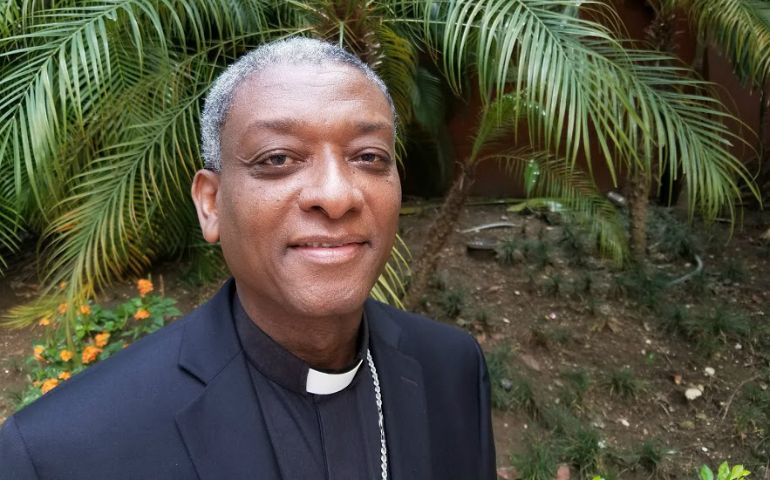 Port-au-Prince, Haiti — In a recent interview with Global Sisters Report about the state of Haiti before the national elections, Cardinal Chibly Langlois avoided overt talk of politics.

But the man whose 2014 appointment as cardinal was seen by church observers as a bellwether for the kind of prelate that Pope Francis favors — one heavily vested in pastoral work and a commitment of solidarity with the poor — made clear that Haiti's economic challenges remain serious.

In a country where more than eight out of 10 people live in poverty and half the country lives in abject poverty, economic problems remain dire, prompting violence in poor neighborhoods and migration both within and outside the country, the cardinal said.

Langlois called the economic situation often grim and said Haiti still imports too much and does not produce enough for its own internal needs. He said there are resources that Haiti could be using for its own use, including solar and wind power.

Langlois said Haitians "have a right to be worried about climate change" and said the country remains vulnerable to "catastrophic" natural disasters, including Hurricane Matthew, which hit the island Oct. 4.

Langlois also noted that in announcing his appointment four years to the day after the devastating 2010 earthquake, Francis solidified his standing with the Haitian people.

"The pope gave Haiti its first cardinal," he said. "That has a very significant meaning for Haiti. It turned out our sadness [from the earthquake] into joy."

The earthquake continues to affect the country, though Langlois said that "in comparison to where the country was during the earthquake, great strides have been made in the country. We can see that, from the human point of view, the Haitian people have recovered from that catastrophe."

Yet he did not minimize the country's ongoing problems.

Langlois said there is still rebuilding that needs to take place throughout the country, including reconstructing the national cathedral, which was decimated in the earthquake. A temporary structure has been built near the site of the old cathedral, but rebuilding the cathedral remains a goal.

Despite continued fragility within Haiti, Langlois spoke of the country's many strengths, including the solidarity that exists between Haitians in Haiti, who number about 10 million, and Haitians of the diaspora, who number about 2 million and live in other countries. He said the efforts of both groups are needed to improve life in the country.

"I want to underline the solidarity that exists between members of 'the family,' " he said, "and the fact that the diaspora is an important force for the people of Haiti."

He also singled out for praise Catholic sisters and priests, saying both groups are "very honored and appreciated in Haitian society. Respected, too. They dedicate their lives to God. But above all, they have put themselves at the service of the community."

Langlois said their work in different types of pastorship are valued, perhaps most of all in education.

"They are in touch with all parts of society, including adults, the young, parents, elderly," he said. "They play a prominent role in the society. Here, we think that education is the key to going forward in the progress of the country."

Pope Francis' understanding of pastoral work "is in agreement with what the religious community has been doing for years in Haiti," Langlois said. "The fact that the mission of the church is based on solidarity — we can't do anything else but to emphasize the light of solidarity."

He added: "It's a special gift, this presence in our community."

[Chris Herlinger is GSR international correspondent. His email address is cherlinger@ncronline.org. Reporting assistance for this story was provided by Harry Voltaire and Juan Carlos Davila Valencia.]

People | Haiti's first cardinal: 'Great strides have been made in the country'

In his own words: President Obama on faith