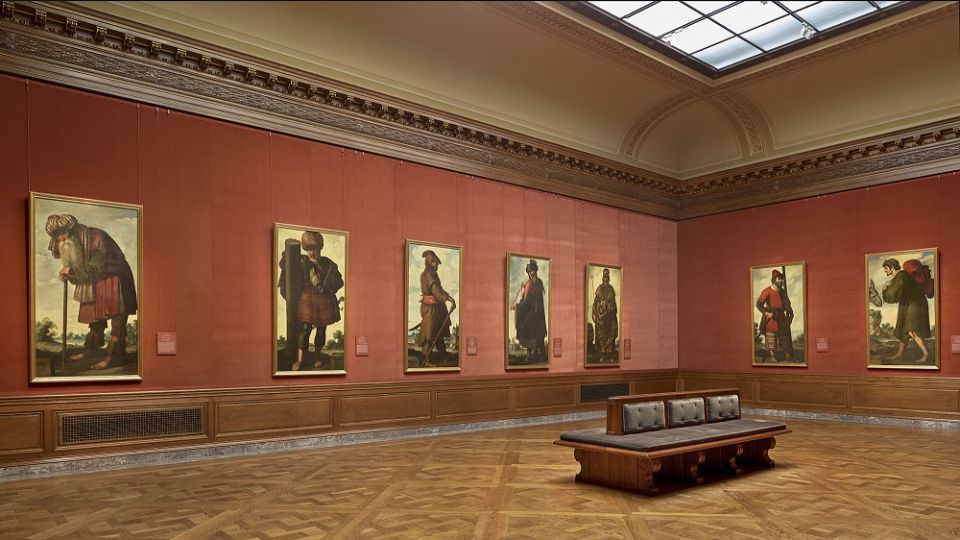 New York — In 1642, it would have been hard to find a Jew in Spain. A century and a half prior, the Dominican Friar Tomás de Torquemada had convinced Catholic monarchs Ferdinand II and Isabella I to issue the Alhambra Decree on March 31, 1492, which offered Jews a choice: baptism or exile. Spain expelled some 160,000 Jews, and up to 300,000 became Conversos — Catholic converts — by the end of the century, according to Encyclopedia Britannica. Some hidden Jews, referredto derogatorily as marranos, espoused Catholic beliefs publicly while living privately Jewish lives on the pain of torture, or worse, if discovered by the Inquisition.

It's impossible to know if Francisco de Zurbarán was thinking about the 150th anniversary of the expulsion of the Jews when he created a highly unusual 13-canvas series of the biblical Jacob and his 12 sons, a series upon which Zurbarán (1598-1664) worked between 1640 and 1645. But in seemingly unprecedented fashion, the painter treated each of the 13 subjects individually, and even sympathetically, in life-sized canvases. Each biblical figure is exquisitely dressed and each is set within a landscape and identified by name on a block in the foreground. Some are bearded, others not; costumes range from the princely to that of a farmer.

So why would the Inquisition, notorious for its rigidity, have tolerated such an apparent celebration of Old Testament figures and their humanity? It would have likely been clear that the figures in this series played symbolic, or contingent roles, according to Susan Galassi, senior curator at the Frick Collection in New York. The Frick is showing the series through April 22 in the exhibition "Zurbarán's Jacob and His Twelve Sons: Paintings from Auckland Castle."

"It's OK to produce these in a Catholic country because really they're just the forerunners," Galassi said. "Maybe that's a way to understand how they could have been produced in Spain at the time of the Inquisition and not gotten Zurbarán into trouble for taking on a subject that was so central to Judaism. I assume it would have been considered safe when looked at as the prehistory to Christ and the 12 apostles."

Mark Roglán, director of Southern Methodist University's Meadows Museum in Dallas, which showed the exhibit before the Frick, agrees. "This is the beginning for Catholics," Roglán said of Jacob, and of his grandfather Abraham. 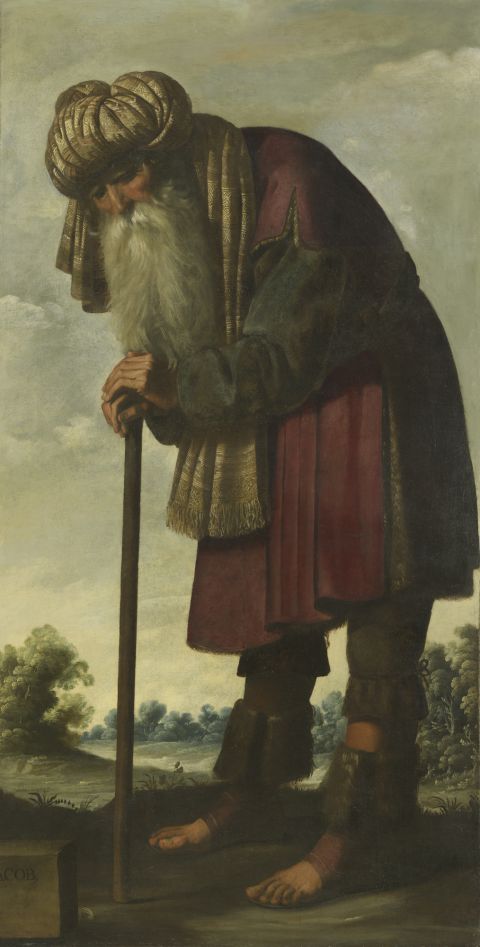 In particular, Zurbarán's depictions of Asher, who carries a basket of bread loaves, and Judah, who is dressed in regal attire and portrayed with his leonine attribute, are connected to Christianity. Asher's bread "brings out eucharistic references, and, of course, you have Judah, which is the family from which Christ came," Roglán said. "They link Christianity and Catholicism with the Old Testament."

Other scholars, who weren't involved with the exhibition, also think the Inquisition wouldn't have objected deeply to the series. "I don't think these would have attracted the attention of the Inquisition," said Ronnie Perelis, assistant professor of Sephardic studies at Yeshiva University.

"There doesn't appear, to me at least, to be any 'Jewish characteristics' in the paintings, other than perhaps an attempt to portray exotic clothing, which almost looks medieval rather than of the period," said Norman Roth, professor emeritus of Hebrew and Semitic studies at University of Wisconsin-Madison and author of several books on Spanish Jewry.

The Inquisition persecuted converts to Christianity and falsely accused them of Jewish practices, rather than targeting Jews, according to Roth and John Chuchiak, professor of colonial Latin American history at Missouri State University.

"The Inquisition in Spain and the New World did not have jurisdiction over un-converted or un-baptized Jews. What it did have a very deep concern over was baptized Conversos continuing to practice their old religion in secret," Chuchiak said. "Jews, Muslims, native non-converts, were not under the jurisdiction of the Holy Office and not its concern."

The earlier exhibition at the Meadows Museum included a Bible that Menasseh ben Israel, a Dutch rabbi whose father escaped persecution in Portugal and who may have been a close friend of Rembrandt's, translated from Hebrew to Castilian. The Bible seems to underscore the Inquisition's differentiation between Jews and Conversos. "It was published in Amsterdam in the 1630s and approved by the Spanish Inquisition," Roglán said. "It said all of that in the cover."

Whatever persuading the Inquisition may have needed, and however unusual it is that the Catholic painter Zurbarán would have addressed this particular Old Testament subject, the series underwent an adventure worthy of its subjects. Fueled in part by some of Menasseh ben Israel's theories, there was an association between the New World and the Lost Tribes of Israel in the 17th century. For that reason, it is suspected that Zurbarán created the series for export to South America.

The association between the Americas and the lost tribes began in the late 15th century, according to Roglán. "There's that current, which especially in the 17th century gets a lot of interest among Jewish theologians," he said. 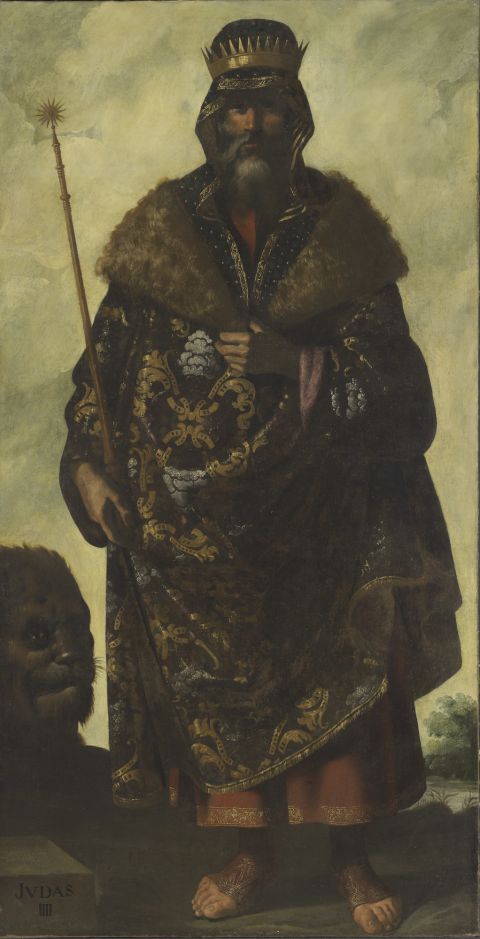 That mapping out of the New World over the story of the tribes of Israel can seem patronizing and Orientalist to modern eyes — the idea that lands previously unexplored by Europeans were untamed and savage and that "discoveries" therein surely had to fit within biblical narratives, whether those discovered wanted to be seen as found after having been "lost." But there's more to Zurbarán's series, according to Roglán.

"I think it's a way to connect them to their own reality and basically explaining what was for them really hard to explain otherwise," he said.

Galassi, of the Frick, agrees. When European Catholics thought of the New World in terms of the Lost Tribes, they were trying to account for the presence of people on a continent that Scripture suggested wasn't inhabited. To do so, the Spanish decided the people living in the New World, who of course had to descend from Adam and Eve, must have been lost tribes. Deciding that the native peoples were of Jewish origin brought them closer to Christianity, and that supposed remote common ancestry became a kind of stepping stone in the conversion process. "It's remarkable that idea could have taken hold," Galassi said.

Scholars had long looked at the works of Zurbarán — whose name and works are lesser known than the Spanish golden age painters Doménikos Theotokópoulos (called El Greco), Diego Velázquez and Bartolomé Esteban Murillo — as indicative of his piety. Much of Zurbarán's oeuvre depicts intensely-devotional symbols, like skulls and penitent monks. The self-taught Zurbarán often set those figures and objects against simple backgrounds, which makes the pictures more appealing to modern tastes.

"A lot has been projected onto him," Galassi said, noting that devotional pictures don't necessarily mean that the artist was deeply mystical. Today, she noted, Zurbarán is thought more as an entrepreneur, who had a workshop and a formula. "It's his brand or his stamp," she said.

But still many assume the works are the product of deep belief. "They have a hold on you," Galassi said.

A different personal connection likely did impact Zurbarán's work on the Jacob series. The artist, whose father worked in the textile industry, emphasized Jacob's and his sons' clothing and tried, according to Roglán, to situate that fashion within a biblically appropriate context.

"I think Zurbarán was really challenged: 'How do I paint something that has not been painted and come up with my own version?' " he said. "He had never been to the Middle East, but he knew that these people were from the Middle East. I think a way for him to accentuate that was bringing these kinds of exotic elements."

Here too, according to Roglán, Zurbarán sought to better connect Jacob's and his sons' portraits to history. 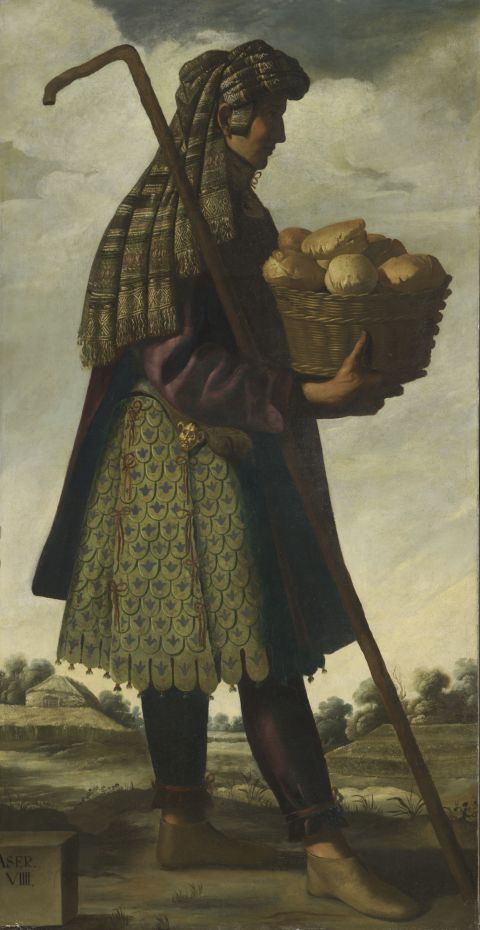 The deliberately-contextualized portraits, perhaps intended to be South America-bound, likely didn't leave Spain, although some rumors held that they were seized by pirates. The status of the works from the 1640s until the 1720s is unknown, then a Jewish merchant of Portuguese origins purchased the works in 1753.

A few years later, the series shipped to England, with Jacob and 11 sons bound for Auckland Castle, purchased by a Protestant bishop; the portrait of Benjamin, which the bishop couldn't afford, headed to a different English castle. The bishop, Richard Trevor of Durham, commissioned a copy of the Benjamin canvas to join the others, and he saw the group as a collective argument for the reason that the rights of Jews should be better protected in England.

The 13 canvases collectively convey a familial sense that is central to the Mediterranean tradition from which the biblical figures emerged, Roglán said. "It's almost like when you see the father and his 12 sons together that you're invited to be in the presence of this family."

"One thing I took away from it is that it makes you go back to the Bible and read Genesis about the complexity of humankind," he added. "Things perhaps haven't changed through all these years when it comes to us humans. There are all these stories around this father and 12 brothers that are still happening today."

After the exhibit closes, the works will return to England's Auckland Castle, where they will continue to do good work, Galassi noted. When the newly-renovated castle reopens, its custodians hope it will be part of a larger sequence of cultural sites that will bring people to the depressed area of Northern England and revitalize the economy. "They've played many roles," Galassi said of the Zurbarán canvases.

US Presbyterian-Jewish relations: steps to 'mend a broken relationship'

St. John of the Cross and our dark night of gun violence