Marquette's Pride Prom to go on as planned despite backlash, petition 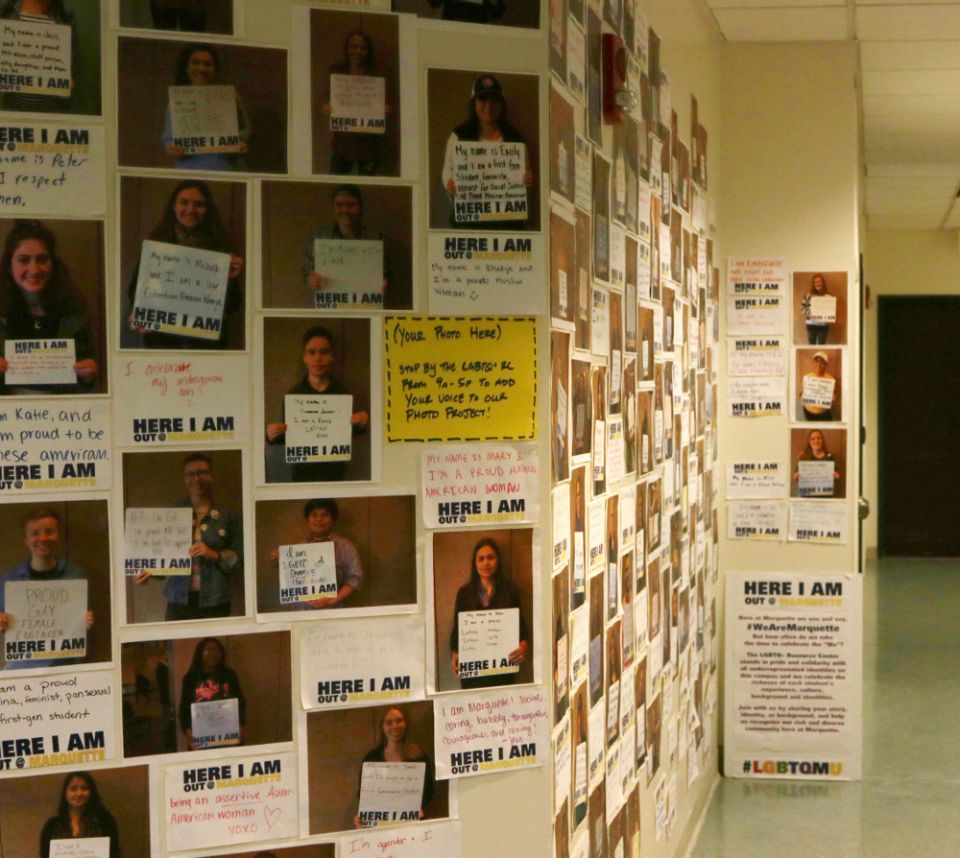 Community members are invited to write a statement about their identity and have their picture taken holding the sign. Several pictures hang outside the Resource Office in the Alumni Memorial Union at Marquette University. (Photo by Caroline White)

Milwaukee — "Be Proud. Be You. Pride Prom 2018." This is the slogan of the Pride Prom being held April 14 at Marquette University. This event is the first of its kind at Marquette.

The Pride Prom was planned by representatives from the LGBTQ+ Resource Center, Marquette student government and the Gender Sexuality Alliance. These plans have persisted despite backlash in the form of an online petition urging the university president, Michael Lovell, to cancel the event.

The petition has been circulating the internet since mid-September. It has accumulated approximately 18,700 signatures and 2,300 shares on Facebook from Marquette community members and outsiders alike. The growth of signatures on the petition has plateaued since earlier reports in the fall of 2017. The petition was created by a group called TFP Student Action.

TFP ­Student Action — tradition, family and property — is a group that works with students and parents to restore and defend traditional morals values on college campuses, according to its website. They are not directly affiliated with Marquette University.

The group cites the catechism's statements on homosexuality and the dance being located in the same building as a chapel as the primary reasons why they are protesting the event. The dance will be held in the Alumni Memorial Union which also houses the Chapel of the Holy Family, an interfaith prayer space.

"The teaching of the Catholic Church is clear: homosexuality vice is 'intrinsically disordered' and contrary to natural law.' Therefore, no Catholic campus should sponsor a dance that legitimizes unnatural behavior which deeply offends God," the homepage of the petition states.

Marquette University also cites the catechism and the teachings of the Catholic Church in its response to the controversy.

"As a Catholic, Jesuit university committed to the pursuit of truth, we also take seriously The Catechism of the Catholic Church's note that people should not rush to 'rash judgment' of their neighbor. Groups that rashly judge and disrespect any community of people go contrary to our commitment to the search for truth and to being an inclusive community," Marquette released in a statement.

Maria Bunczak, a sophomore at Marquette, was involved in some of the event planning. She is the president of Empowerment, an intersectional feminism club which is co-sponsoring Pride Prom. For her, the petition is evidence of the marginalization of the LGBT community.

"People say that we have made so many strides with gay marriage being legal, that's true, but we still have so much further to go, and this petition really exemplifies that," she said.

Marquette also recognized the importance of inclusion on a college campus, especially in relation to minority groups such as the LGBT community.

"Marquette strives at every level to foster a culture of inclusion, which means we are a community that respects, welcomes and promotes a sense of belonging. We support our LGBT community in ways that are both pastoral and educational, recognizing that they have an important voice that we must include in our conversations," the university said. 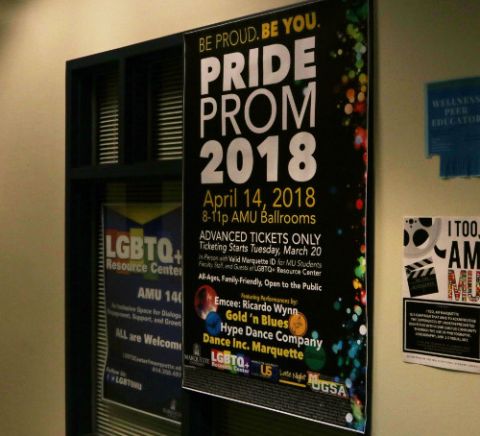 Although the petition is criticizing the work Bunczak and the other planners of the event are doing, she sees it as a motivating force rather than a discouraging one.

"It makes me excited that people hear what I'm saying and see what we're doing as an organization, and that they aren't just seeing it and going 'oh, whatever.' They're seeing it and reading it and reacting to it," Bunczak said, "Seeing that someone is against our mission helps fuel us even more because these people and this sort of thing (are) the reason we do what we do."

The LGBTQ+ Resource Center has many campus community co-sponsors for the event including the Wellness Center, the Honors Program, Lutheran Campus Ministry and more. The webpage for Pride Prom states community engagement as one of the goals for the event.

"Pride Prom 2018 is intended to be a larger community event focused on our Marquette, Milwaukee and surrounding area community coming together in the celebration of the diversity of the community, in all shapes, forms, colors, and creeds, and specifically of the LGBTIA+ Community," it said.

Cecelia, a freshman at Marquette, said although the event is advertised as inclusive of all people, the planners of the event have not successfully reached that goal. She requested her last name be omitted due to privacy.

"I think that mesh of trying to create a more diverse community is kind of not there anymore due to the fact that they have made it known who they are, and there's not that warm fuzzy feeling like an interaction but more segregation," she said.

Additionally, Cecelia thinks that because other campus groups hold their dances off campus that Pride Prom should also be held off campus.

"Yes, they organize at Marquette, but if everybody else is expected to have their event off campus, especially the fact that this is in some ways clashing with Catholicism and the values that we encompass at our university, they should also be expected to organize off campus to hold that event," she said.

Marquette's LGBTQ+ Resource Center, which opened in 2015, has hosted events similar to Pride Prom, such as the Pride Dance hosted last year. Bunczak said this shift, though small, is significant.

"You wear a fancy ball gown. You wear a suit. You get all dressed up. There's going to be music and dancing," Bunczak said. "Prom is something that is so important, and it's really important for some LGBT individuals who couldn't go to prom in their high schools dressed the way that they feel most expresses themselves."

Pride Prom will be held at Marquette on April 14. The event is closed to the media.

[Caroline White is a freshman at Marquette University studying journalism and environmental studies. She is a news reporter for Marquette's student media news outlet, the Marquette Wire.]

People | Marquette's Pride Prom to go on as planned despite backlash, petition

The joy of love -- but not for everybody

We must welcome gays, lesbians as they 'were created to be'