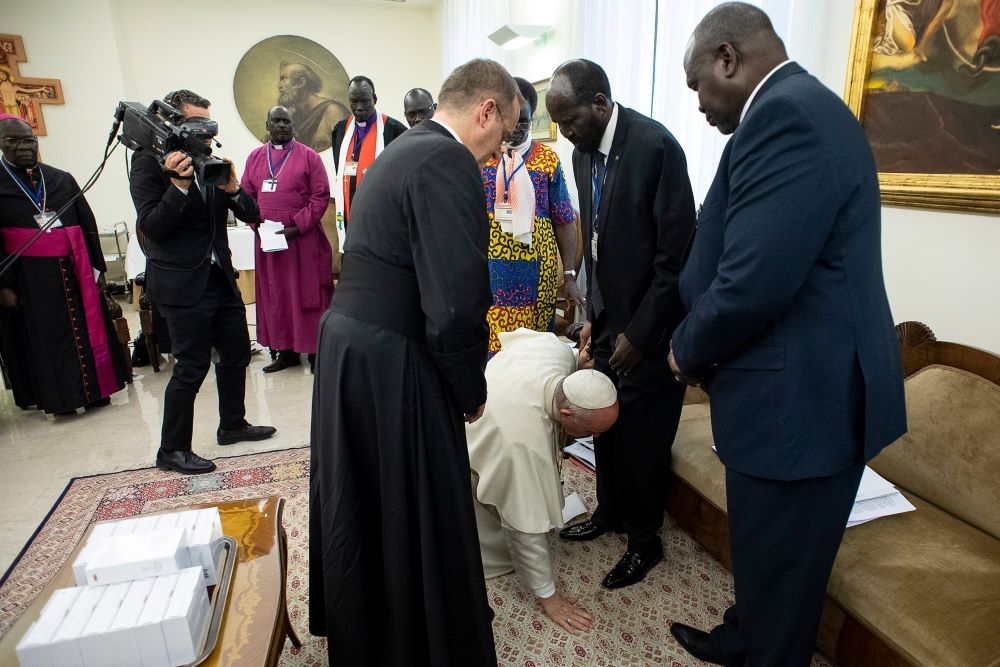 Pope Francis kneels at the feet of South Sudan President Salva Kiir at the conclusion of a two-day retreat at the Vatican for the African nation's political leaders, in this April 11, 2019, file photo. The pope plans to visit South Sudan July 5-7. (CNS/Reuters/Vatican Media)

When Pope Francis makes his much anticipated ecumenical visit to South Sudan in July —  with the Archbishop of Canterbury, Justin Welby, and the moderator of the Church of Scotland, Jim Wallace —  it will mark a major milestone in the pontiff's yearslong efforts to encourage the country's delicate peace process.

Yet before Francis was even elected pope, it was the international Community of Sant'Egidio, a lay-led Catholic social service organization based in Rome, that had been paving the way for this historic moment.

South Sudan, the world's youngest country, gained its independence in July 2011. Long before then, however Sant'Egidio was present in the country, tracing its relationship — or what Sant'Egidio's secretary general, Paolo Impagliazzo, refers to as its "friendship" — to 1994.

Then the first delegation from Sant'Egidio arrived from Rome when the country was just Sudan. Seventeen years later, nearly 99% of the South Sudanese voted for independence, and just two years later, the country was engulfed in a bloody civil war after a rift between its president, Salva Kiir, and his vice president and political rival, Riek Machar. 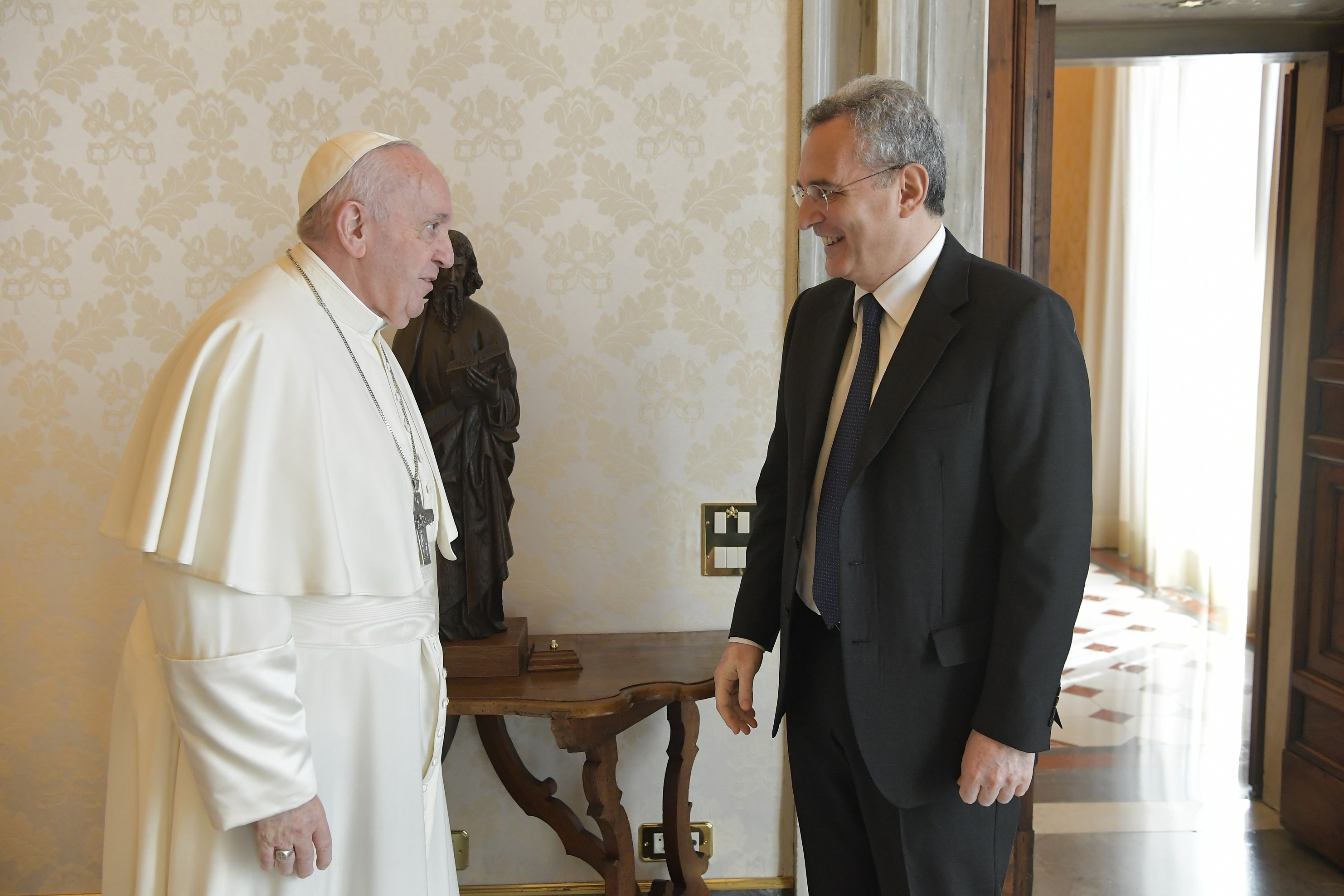 The civil war — which decimated the country's already fledgling economy, produced more than a million refugees and left a body count of an estimated 400,000 — lasted until 2020. Kiir and Machar now lead a fragile coalition government in an effort aimed at national unity.

Not only has Sant'Egidio had a front-row seat to the peace process, but it has been one of its major protagonists.

Known as the “United Nations of Trastevere,” a reference to the Roman neighborhood where it is headquartered, Sant'Egidio was founded in 1968 and has been instrumental in peace processes in place like Guatemala, Kosovo, and, most notably, Mozambique, where it helped bring about an end to the country's 16-year civil war.

The group's method includes listening to all factions within a country without prejudice, something that is currently dominating much of its work in South Sudan, where there is a very tenuous peace accord.

While there have been various agreements and even more meetings — these days Impagliazzo travels the country about every two months and estimates he has been to South Sudan "dozens" of times — the backbone is a "Rome Declaration" signed in January 2020, which at the time represented all the country's political players. 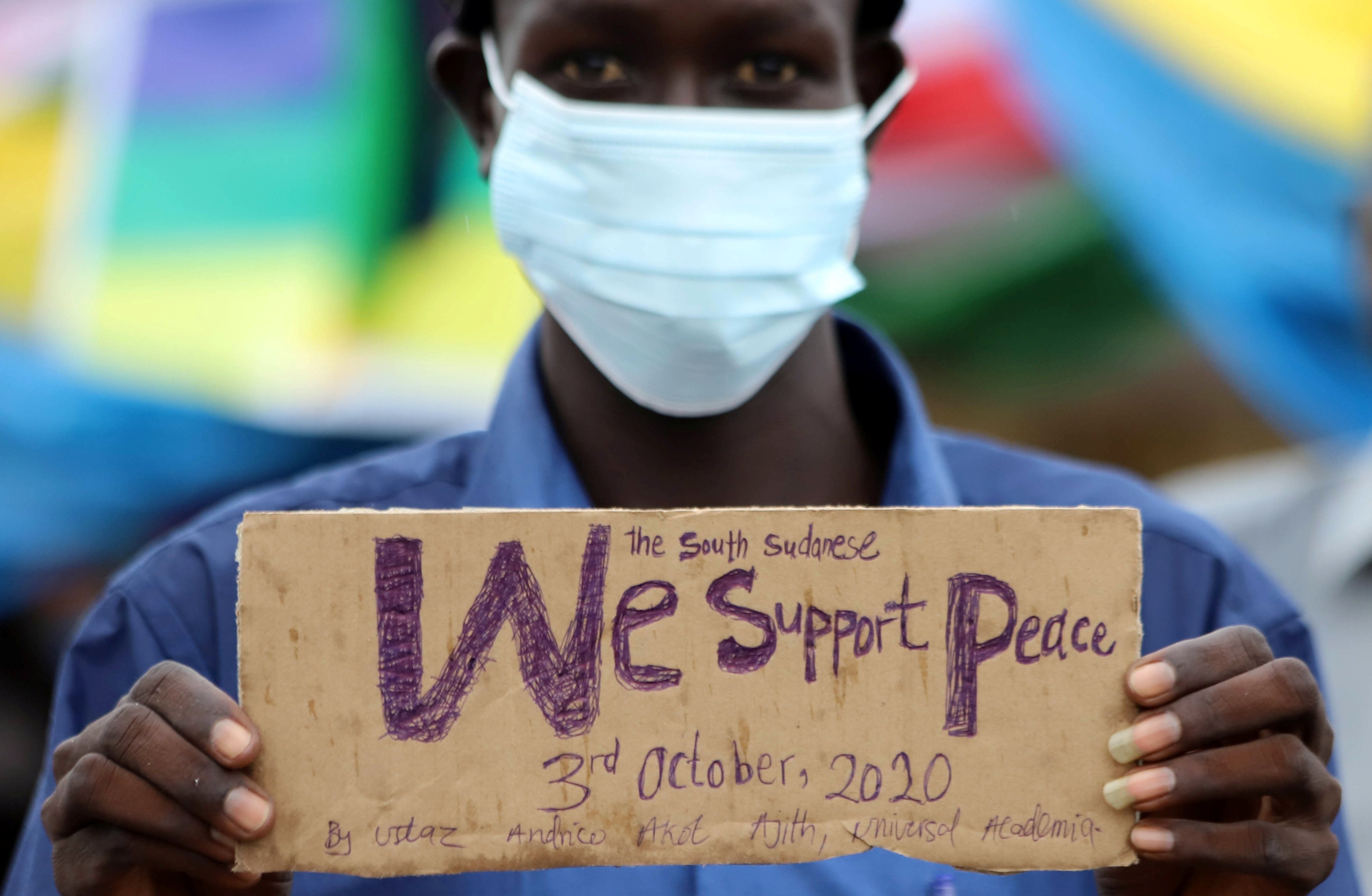 Among its accomplishments, the agreement pledged a ceasefire in the country, outlined internal mechanisms to resolve hostilities and guaranteed that humanitarian organizations would be allowed to work within the country.

Paving the way for that agreement was an April 2019 visit to the Vatican, where Pope Francis met with the South Sudanese president and the country's rebel leadership. In a now memorable scene from that encounter, the pope knelt and kissed the feet of the five-member leadership delegation, begging both the country not to return to civil war.

Impagliazzo said the COVID-19 pandemic complicated the 2020 agreement, as there was no way to effectively monitor the situation nor hold in-person meetings. By the end of that year, further factions had emerged within the country's leadership.

Under a current two-track plan, Sant'Egidio is still ensuring that everyone has a seat at the table, working toward forming a unified military, instead of the legion of militias operating throughout the country, and holding general elections in the country in 2023.

Given its unique status, Sant'Egidio is able to work with all parties in a way most international organizations cannot.

"We have no interests apart from peace and the people of the country," said Impagliazzo, who said it's important to provide spaces to openly discuss their perspectives and not to arrive with any "pre-cooked" agreements.

The documents, he notes, must be "completely framed by the parties."

Western powers, such as the European Union, were not part of the latest round of agreements, Impagliazzo said they have generally been supportive "as a way to reduce the conflict and to preserve peace."

There is a delicate balance, he said, of providing the country with much-needed international aid, while also helping it to become self-sufficient.

Impagliazzo said the effects of outside humanitarian support are evident in the capital city of Juba, where conditions are improving, but clashes and limited rule of law still occur in more rural areas, where more attention is needed.

"Half of the population of South Sudan is relying on international aid and it's important for people that are far from Juba, who are victims of some of the Juba dynamics, to be supported," he observed.

"While the situation in Juba is improving, unfortunately other parts of the country are left behind," he said.

Impagliazzo hopes the July 5-7 ecumenical visit to Juba will spotlight the needs of the entire country and force political leaders of all factions to come together beforehand to advance the cause of peace.

Even so, he is under no illusions that one visit will be a silver bullet and solve all the country's problems, saying that Sant'Egidio had "adopted" the country long before Francis' arrival and will be present long after he departs.

South Sudan, he notes, is quite young — not a child, but barely a teenager  — "and we have to go along with South Sudan until they are an adult."