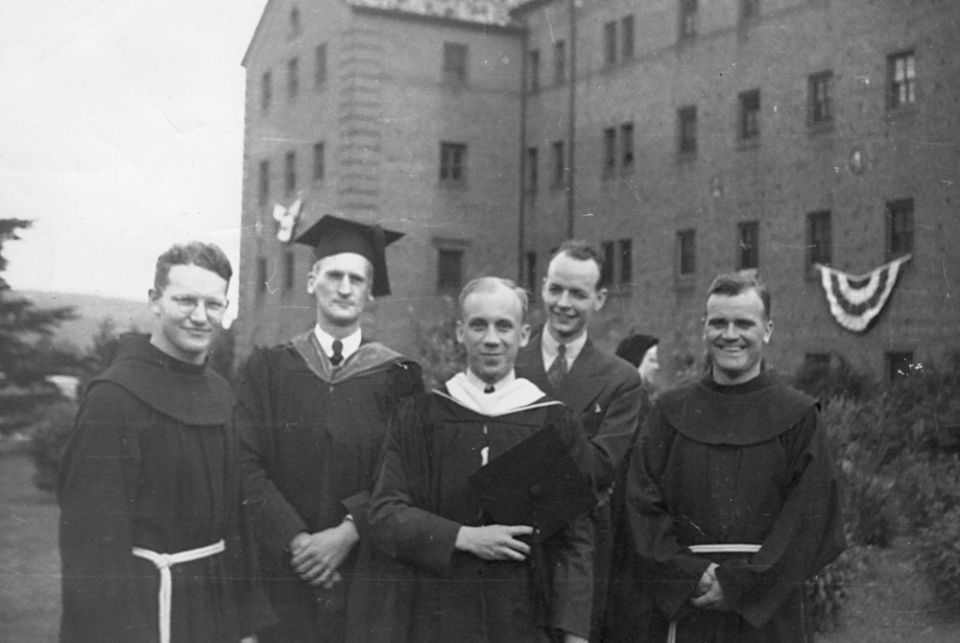 Allegany, New York — If the truth be known, one of the most famous sons of St. Bonaventure University in Allegany wanted nothing to do with the institution when he first saw it. Riding with his friend, the poet Robert Lax, who grew up in neighboring Olean, New York, Lax's offer to show Thomas Merton the campus of St. Bonaventure's College — as it was known in 1939 — was met with Merton's rejection.

"Too many statues" and religious images, Merton reportedly told his Columbia University buddy, refusing to get out of the car.

By the following year, Merton would be teaching English literature survey courses to some 90 students and earning $45 a month — not bad pay for rural upstate New York where jobs were few and the effects of the Depression were still to be seen in 1940. St. Bonaventure's student body counted 383 students in 1940 and 423 in 1941 when Merton taught here. Fresh from gaining his bachelor's and master's degrees at Columbia, he considered himself lucky to fill a vacancy when a teaching Franciscan friar left.

During his three terms at St. Bonaventure, Merton would often be seen walking about the 500-acre campus, which abuts the Allegheny River on its south side and stretches to the Allegheny foothills, where he climbed frequently in his bid for silence, a place to pray, reflect and view the vastness of the college, founded by Franciscan brothers in 1858. A bare spot on a hill high above the river is still known as "Merton's Heart."

Today, St. Bonaventure University is home to almost 2,400 students — most of them hailing from nearby Buffalo, Rochester and Syracuse, but also from some 30 states and 20 foreign lands. The Bonnies surprised everyone this year — winning a berth in the coveted NCAA's March Madness and beating UCLA in the opening game. It was their first victory* in the basketball tourney in 48 years.

A majority of students are intent on getting degrees in business — with accounting, management, finance and marketing among the most popular majors. Education, specifically adolescence education, elementary/special education, and sports studies are also sought by many. So, too, are sciences — health sciences as well as computer science, psychology and political science. Journalism remains a coveted staple and the small Franciscan university boasts six Pulitzer-Prize-winning alumni.

However, most students know nothing about the monk, writer and spiritual guru Thomas Merton. His name does not appear in admissions essays, noted Douglas Brady, director of admissions, though some young folks who have read Merton "pop onto campus," wanting to see Bonaventure, he told NCR.

This year, they will have a chance to learn more as the Friedsam Memorial Library mounts an exhibit marking the double significance of Dec. 10 in Merton's life. It was 50 years ago on Dec. 10, 1968, that the Trappist monk died mysteriously — most believe by accidental electrocution — at a conference of Catholic abbots in Bangkok. And it was on Dec. 10, 1941, that Merton exited St. Bonaventure, moving to rural Kentucky where he began 27 years of living in the Monastery of Our Lady of Gethsemani as a monk and later a hermit with the Cistercian Order of the Strict Observance, also known as Trappists.

During his years with the Trappists, Merton wrote 70 books, including The Seven Storey Mountain, a confessional autobiography of his restless youth. In print now for 70 years, the book has sold more than a million copies. Many students hear of it for the first time in one of the university's literature classes. 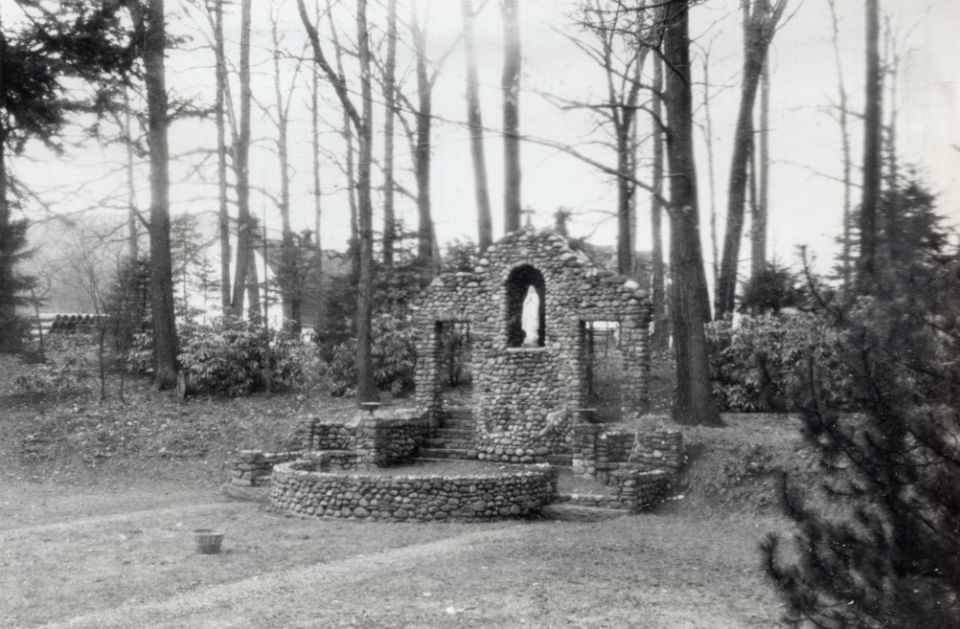 St. Bonaventure's Grotto of Our Lady of Lourdes, noted as a place for contemplation, was built by seminarians in 1925. (Naomi Burton Stone)

They can learn more at the "modest display" that will honor this double Dec. 10 anniversary, said Paul Spaeth, special collections and rare books librarian. Spaeth called St. Bonaventure "a turning point," but also a "starting point" in Merton's life, as it is the place he confirmed his vocation when praying at the shrine to St. Thérèse of Lisieux on campus, a shrine that remains the same today as it did then.

Merton, age 26 when he decided to abandon academia for a solitary life, was little older than Thérèse was when she died at just 24, succumbing to tuberculosis in a Carmelite convent in France, only 18 years before Merton's own birth in Prades, France. Both figures had suffered the loss of their mothers at an early age and were largely raised by their fathers. Thérèse, a much-loved young saint, was known to have had great appeal among priests, especially missionaries, for whom she often prayed, rewarded at times with seemingly miraculous favors.

Merton laid his indecision about priesthood squarely on Thérèse when visiting the shrine, a place he had previously refused to see with Lax. But having read her autobiography, he wrote of being "knocked out" by the story of Thérèse's life. "You show me what to do. If I get into the monastery, I will be your monk," he intoned. He believed he heard the Trappist bells of Gethsemani, which he had visited the previous Easter, when he invoked Thérèse's aid.

Merton might not have discovered Thérèse or her shrine had it not been for St. Bonaventure's librarian, Franciscan Friar Irenaeus Herscher, who recognized the young teacher's scholarship and gave him access to every book in the library. The library houses nearly 100 full book manuscripts dating from the late Middle Ages, almost 300 of the earliest printed books in Europe and thousands of imprints from the 16th through 19th centuries. Merton was in heaven, spending hours in Friedsam. 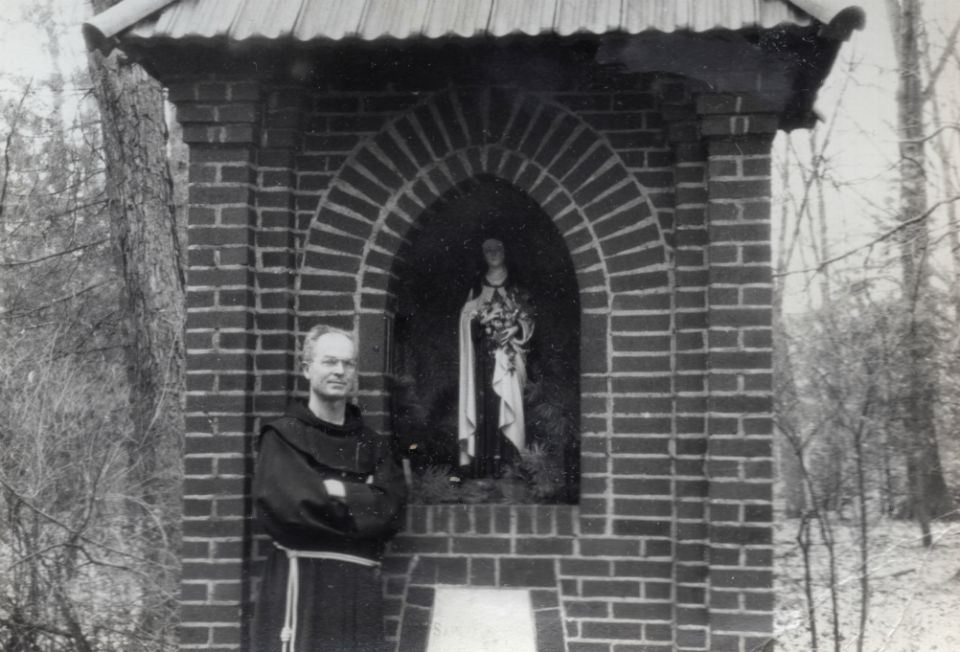 Six years after Merton's death, Kathleen Cecala (née Petersen), a student from Hartford, Connecticut, was also a regular in the Friedsam, assigned there as part of her work-study program. "A perfect job," she told NCR, as she wanted to be a writer and the building was crammed with the works of great writers.

She also got to know Herscher, by then librarian emeritus, who came to the library daily. Through him, she met Merton, largely via the manuscripts Merton had left at the university. In the 1970s, the campus was still in a state of mourning over the monk's sudden death at age 53, she said, but Herscher and the other friars were working hard to preserve his legacy.

"Merton definitely influenced my life and my decision to pursue writing as a career," said Cecala, who lives in New Jersey. She has authored a number of books since graduating from St. Bonaventure. From the scrivener monk, she learned writing would not be easy, but she said his books also helped her acquire an ease in writing about spiritual matters, "so that it eventually became second nature."

Cecala's enduring interest in monasticism and contemplation stem from reading years ago in the Friedsam. Most recently, it has resulted in Hard Cider Abbey, a murder mystery that takes place in a fictional monastery. In November, her biography of Herscher, Called to Serve, detailing his friendship and lifelong connection with Merton, will be published by the Franciscan Institute.

Franciscan Friar Daniel Horan, who did his undergrad studies at Bonaventure from 2001 to 2005, regrets that so few students really appreciate the significance the campus and the Franciscan tradition had on Merton's life, thought and vocation. He hopes the anniversary of his untimely death might draw more attention to the monk for a new generation.

Horan, a Bonaventure trustee and the author of The Franciscan Heart of Thomas Merton: A New Look at the Spiritual Inspiration of His Life, Thought, and Writing, pointed to much in Merton's own college life that could resonate with today's Generation Z and even older millennials.

Merton questioned his beliefs, Horan said. He experimented with political associations, including communism. He developed his creative and artistic side, made diverse, lifelong friends, got into trouble and was shaped by his undergrad mentors, Horan wrote in a 2015 article in America magazine.

Horan, assistant professor of systematic theology and spirituality at Catholic Theological Union in Chicago, believes it is the responsibility of those who know Merton and his work well, to help spread the word to younger students, inviting them "to be inspired and challenged by his still-relevant insights," Horan told NCR. In this regard, he organized a conference at Catholic Theological Union Dec. 7-8, dedicated to the legacy and future of Merton's work.

St. Bonaventure's expansive campus, which still holds the buildings in which Merton resided, taught, ate, studied and wrote, and the grounds over which he roamed, comprises the largest Merton space outside of the Kentucky abbey. Anyone who wants to experience it and walk in Merton's footsteps needs only get out of the car.

*This article has been edited to correct the basketball record.

Read this next: 50 years after Merton's death, maybe 'we're finally getting him'