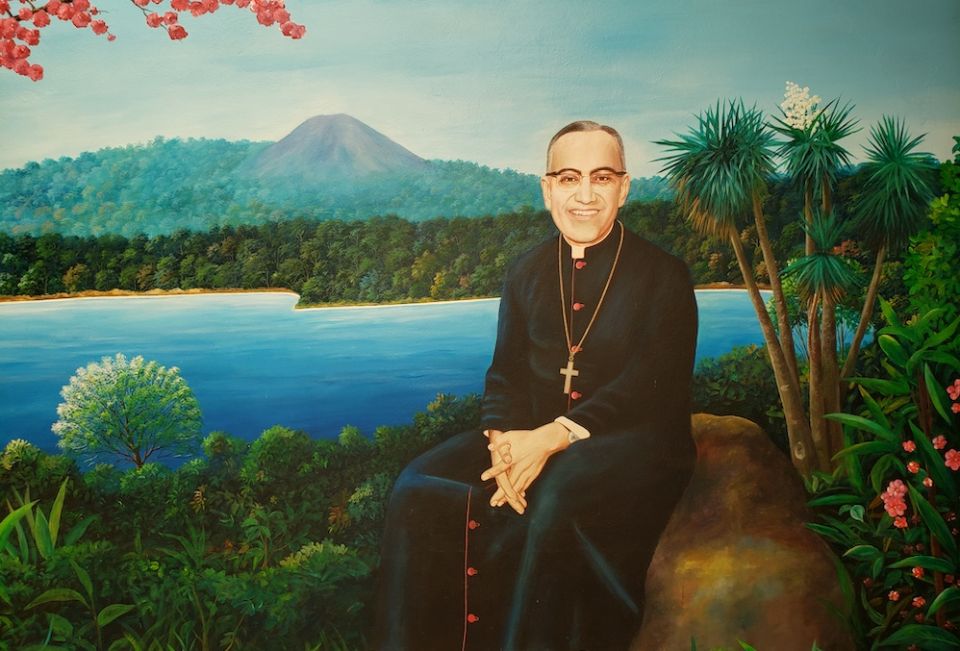 This painting of St. Óscar Romero is in the entryway of Romero's residence, now a museum, on the grounds of Hospital de la Divina Providencia in San Salvador. (NCR photo/Chris Herlinger)

San Salvador, El Salvador — When Salvadorans mark the 40th anniversary of Óscar Romero's assassination on March 24, it is expected they will march in processions, attend Mass, listen to homilies and reflect publicly and privately about a man who has come to define their church and their nation.

But in a country where Romero's visage is seemingly everywhere — in churches, on street corners, in shops and living rooms — one question hovers at the sidelines: which Óscar Romero is being honored? The saint? The humble priest? The martyred Catholic? A man entombed in history at a particular time and place, or a living example for a country still struggling with the legacy and after-effects of a decade-long civil war?

These questions kept coming to the surface during an assignment that took me to El Salvador in the late summer of 2019 to report on the work of Catholic sisters, particularly those working in  communities where gang-related violence is prevalent. 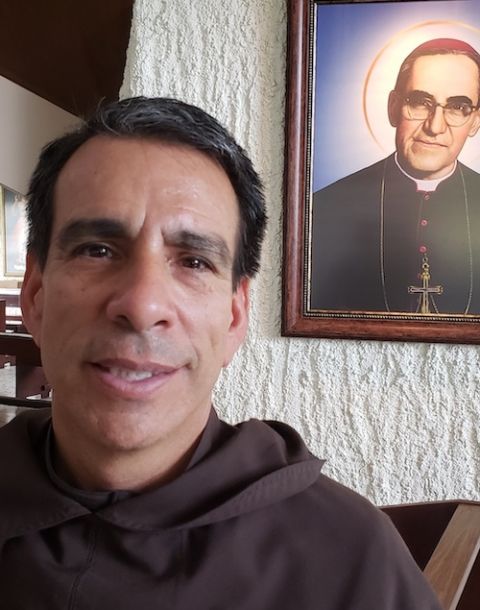 Carmelite Fr. Paul Henson from Los Angeles in the chapel near where Óscar Romero was assassinated. (NCR photo/Chris Herlinger)

Tellingly, in between visits to those neighborhoods, I kept returning to a point of pilgrimage: the grounds of the Hospital de la Divina Providencia, where Romero lived and where he celebrated his last Mass on March 24, 1980. The hospital is run by the Missionary Carmelites of St. Teresa.

One of those I spoke to was Carmelite Fr. Paul Henson, visiting from Los Angeles. We met just a few yards from the altar where Romero was felled by a gunman who, from outside the chapel, shot the cleric with a rifle.

Henson finds Romero's legacy continuing in the ministry of Pope Francis — a ministry dedicated to facing "the suffering of the poor," such as those at the U.S.-Mexican border. "His [Romero's] theology was always "God first,' " Henson said, leading him to reflect and question whether in the current crisis, borders "are absolute."

A few days later, in the same chapel, I met Carmelite Sr. María Julia García, the current hospital administrator. She was 28 when Romero was assassinated and saw him occasionally. She recalls a modest and quiet man who sought peace with an eye for practical solutions. With Romero's assassination, "people felt lonely and unprotected because nobody would stand up for them."

"He lived the word of God and made it come alive," she said, adding that Romero, like Jesus, offered his life as a sacrifice for those he loved. But at the same time, García believes Romero did not "fly a political flag. His flag was the Gospel."

At a moment when people in El Salvador were being killed "for nothing," Romero's prophetic stance against violence — and his specific call the day before his assassination that those in the military stop their killing — is what ultimately caused his death, García said. 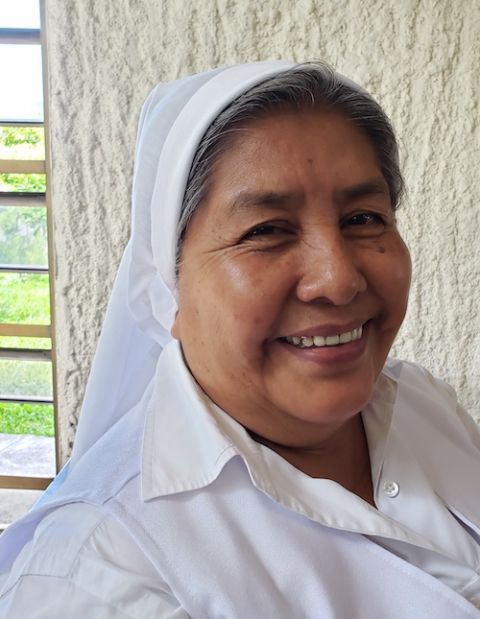 "He was like a stone in the shoe," she said, noting that even today not all Salvadoran Catholics believe Romero is a saint.

"But people with a social consciousness believe he was a saint," she said.

Even so, those who have resisted the adoration of Romero still have the power to provoke.

On my first morning in the country, I accompanied Salvadoran Sr. Hilda Alfaro, a member of the Guardian Angel congregation and Raquel Orellana, the San Salvador-based program leader for the Color Movement, on a visit to the hospital grounds. (The Color Movement supports the work of Catholic sisters in Salvadoran communities facing challenges like gang violence. It is a joint initiative of Alight, formerly the American Refugee Committee, and Sisters Rising Worldwide, both Minnesota-based organizations.)

As we walked through the small residence that has been turned into a museum, Alfaro and Orellana both noted that followers of the late right-wing political leader Roberto D'Aubuisson, who a United Nations truth commission named as the one who ordered Romero's assassination, "still believe he was in the right to order the killing," Alfaro said. "They still believe he [Romero] was a terrorist," Orellana added.

Such comments bubbled up a bit in the process of Romero's canonization, Orellana recalled. Some on the right said the Salvadoran left wanted Romero killed "so they could have a saint, a martyr."

Such comments were hurtful, she said, but showed that "evil is still alive in a lot of people's consciousness," she said, "to justify a horrible thing that happened and turn it into a good."

It is not easy to find such people willing to speak publicly on this theme. Sergio Leonel Estrada Massis, a Salvadoran businessman who worked with North American journalists during the war as a "fixer" in the 1980s and who helped me with translation and arrangements during my assignment, asked someone he knows on the right if he would be willing to be interviewed. The man thought it over but eventually opted not to, saying that his words might be misunderstood or misconstrued.

Estrada told me that is a common reaction in the right wing — after all, when news spread of Romero's assassination, celebratory fireworks went off in some of San Salvador's wealthy neighborhoods. The wealthy called Romero a communist who, they believed, should have "tended to pastoral concerns," Estrada said.

Yet Estrada noted that Romero, who never fully embraced liberation theology, also criticized leftist guerrillas for their killings during the war. "He was also a stone in the shoe of the left," Estrada said.

Marisa de Martínez, the sister of D'Aubuisson, told me in an interview, "There is a sector that is still in a bubble and won't accept Romero."

Martínez reveres Romero and her work as a social activist continues his legacy. "They reject him. They say, 'He was a communist, like the Jesuits,' " referring to the Jesuit priests whose murders by a Salvadoran military unit in 1989 were initially justified under the guise of national security. "They say those killings were justified — and they say the same thing about Romero."

But the extent of anti-Romero sentiment is hard to gauge. "Romero spoke," Martínez said of the public-at-large's view of Romero, "and the subject is over." In other words, Romero's preeminence is not in question. 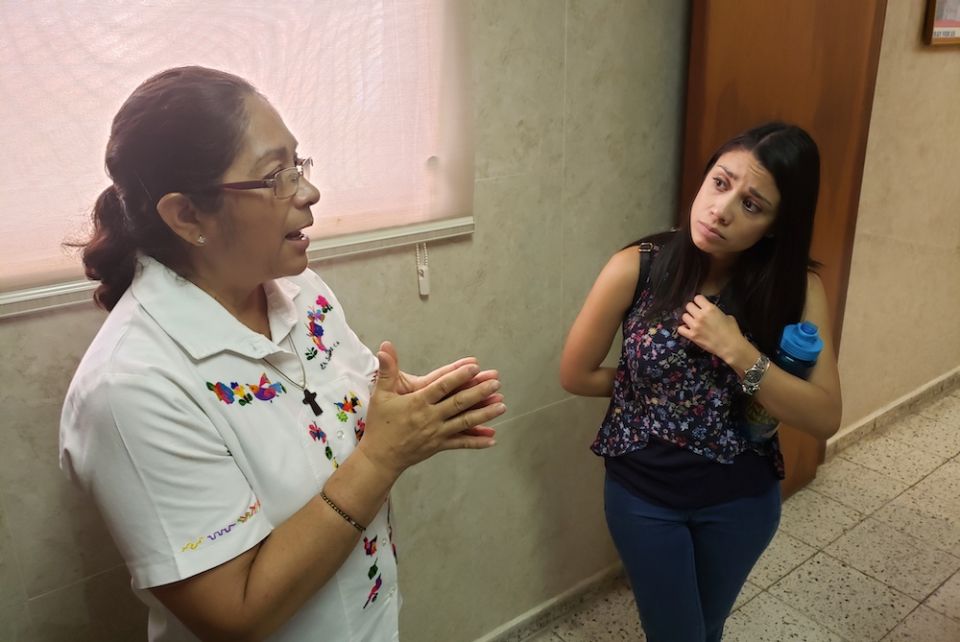 Sr. Hilda Alfaro, left, a member of the Guardian Angel congregation and Raquel Orellana, the San Salvador-based program leader for the Color Movement, on a visit to the home, now a museum, where Óscar Romero lived. (NCR photo/Chris Herlinger)

Yet, it was not always that way. In the midst of the war of the 1980s and even through much of the 1990s, the church and the country itself didn't know quite how to commemorate the memory of Romero. "For many years the church didn't talk about him," she recalled.

It is likely that the debate over Romero's legacy will never be fully settled.

Orellana recalls a Facebook reaction to a post she made when Romero was canonized in Rome in 2018. " 'I don't know why you brag about this person,' " Orellana recalled the reaction saying. " 'He was just another person.' "

Romero himself, known for his humility, might not have disagreed with that assessment — his former residence on the grounds of the hospital is a model of simplicity and frugality.

But Orellana — whose parents were married by Romero in 1979 — believes his accomplishment is remarkable, but not his solely. It is a piece of a martyred but proud country.

"To me, he's a saint. He made the ordinary extraordinary. He spoke the truth, and with that, changed lives and made a social transformation."

If Romero were alive today, I asked Orellana, what would he say about the present Salvadoran context?

"He would see gang members as humans meant to be loved and that what they are doing [in committing crimes] is due to the lack of love in their hearts," she said. "I think Romero would say, 'You are people who need love, but you need to stop hurting and killing people.' "

At the same time, Romero would probably fault the structures of Salvadoran society that have made gangs so prominent, she said. "You need education, health care, jobs." Put another way, Orellana said, Romero would say this: "People need dignity."

Romero certainly affirmed that dictum. García recalls that once over breakfast Romero and the sisters' superior, a Mexican sister, had a major argument — over what exactly García doesn't recall. But it was an unpleasant moment and both left the breakfast table angry.

At 7 p.m. that evening, as the sisters settled in for their dinner, the doorbell rang; Romero said he wanted to see speak to the superior. "I ask for your forgiveness," he told the woman. "I can't go to sleep tonight if I'm still angry."

García recalls the story with quiet relish. And there's good reason why.

"It's important for us," she said, "to continue his legacy." 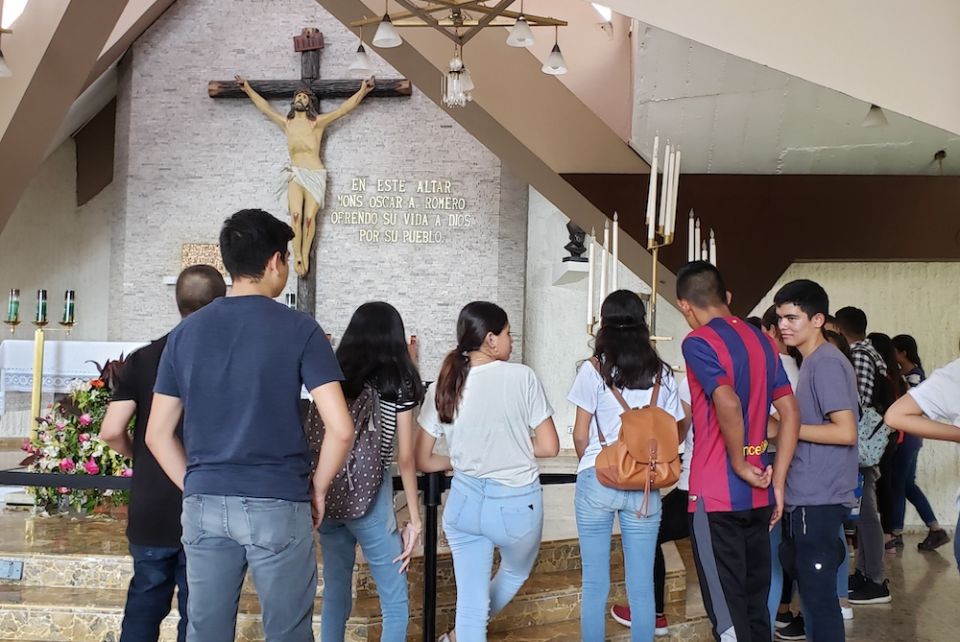 Young people at the altar of the chapel where Óscar Romero lived and where he celebrated his last Mass on March 24, 1980. The hospital is run by the Missionary Carmelites of St. Teresa. (NCR photo/Chris Herlinger)