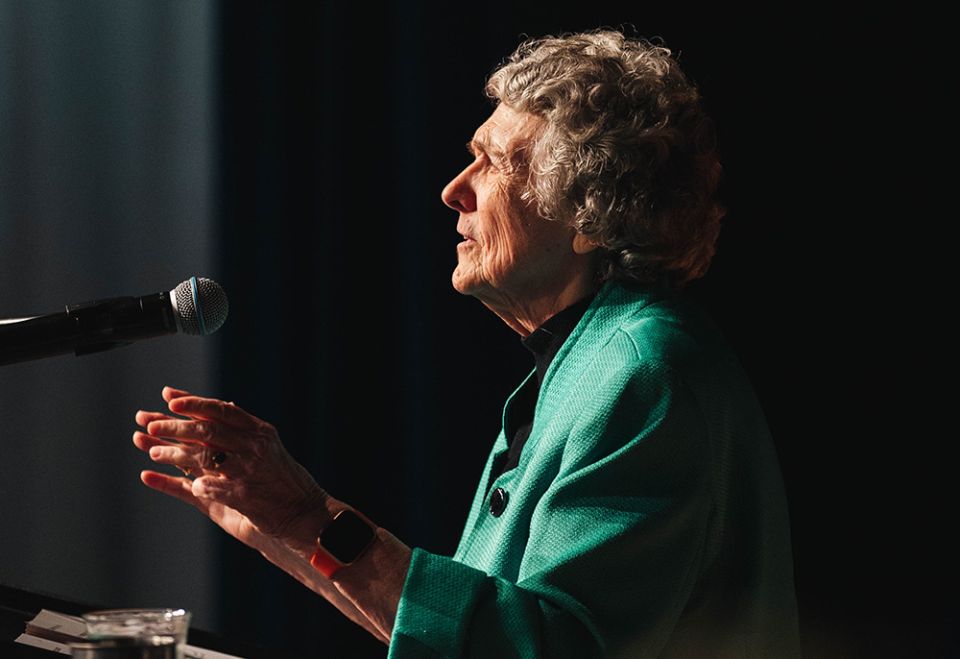 Sydney — "It's time for prophetic voices everywhere to get into the conversation, study the issues, stay with the problem, to speak out. The question now is whether there'll be prophets enough among you, here, in this group, in this generation to help the world and the church sort and sift ideas that others want to suppress. Prophets of real faith must go on raising their cries!"

Challenging words from Benedictine Sr. Joan Chittister to an audience of Catholic activists in Sydney. The "troublesome" American nun is in Australia for a major speaking tour at a crucial time for the Catholic Church in this country. I spoke to her in Sydney a few days before her talk here and asked if she sees herself as a troublemaker.

"No, I'm not a troublemaker but I am a truth teller, and that can get you into a lot of trouble," she said. "But people deserve other people's answers, other points of view, so they can assemble their own."

Last time Joan was invited to Australia was in April 2019, when she was asked to be keynote speaker at a National Catholic Education Conference to be held the following year in Australia's second biggest city, Melbourne. Shortly after came an email disinviting her, reportedly at the request of the Melbourne Archdiocese.

This provoked outrage among progressive Catholics in Australia and was reported widely in the media. The twin major newspapers The Sydney Morning Herald and Melbourne's The Age carried the headline: "Melbourne Archbishop in censorship row involving US feminist nun." And even The New York Times reported on it with its headline: "She's 83 and a Famous Nun: Australia's Catholic Leaders Want Her to Stay Away."

'No, I'm not a troublemaker but I am a truth teller, and that can get you into a lot of trouble.'

Normally, the church wouldn't comment on such a controversy, but in July 2019 the Melbourne Archdiocese issued a statement denying Archbishop Peter Comensoli had vetoed Chittister speaking. Rather he had "requested that more names aligned to the themes of a national Catholic education conference be considered."

This episode highlights a key problem in the Australian Catholic Church: Many bishops and priests, if not the majority of them, are conservative, out of touch, and rule their patch with little consultation or accountability in their communities. Tellingly, on her current tour, out of the 40 or so Australian bishops, only one arranged for Chittister to meet with him and his clergy. This was Bishop Vincent Long, who came to Australia as a teenage refugee from Vietnam.

As Chittister was quoted in The New York Times about her 2019 ban: "It is pathetic. These teachers for the next generation of thinkers are being denied the right to pursue ideas. I see it as bigger than one conference. I see it as an attitude of mind that is dangerous to the church."

There are moves afoot now in the Australian Catholic Church to address these "dangerous" attitudes and bring about real reform. That's why it's a crucial time for the church here. Some of the pressures for change are external to the local church and some are internal.

Firstly, Pope Francis' promotion of a move away from autocratic and hierarchical to consultative synodal governance for the church. And secondly, a fairly recent four-year Australian federal government inquiry into child sexual abuse in a range of institutions. Its final report was released in December 2017.

The report revealed an astonishing level of abuse in the Catholic Church and was scathing in what it described as "catastrophic failures" of church leadership and governance. Some of its shocking statistics:

The internal pressures for change are also twofold.

First, there is a plenary process underway that was instigated by the Australian bishops, with all of them as members along with representatives from clergy, religious and laity. Its first session was held in October last year and the next session will be held in July this year. This is a response to the sexual abuse crisis and also preparation for the pope's now expanded 2021-23 global process for the Synod of Bishops.

And secondly, there's a range of committed and vocal progressive Catholic activist groups. They see the plenary process as a key opportunity to bring about badly needed change in the church. They're also concerned the process could be stymied by conservative forces and won't deliver meaningful reform.

This is the turbulent context of Chittister's tour here and it's the progressive groups that are sponsoring her visit. The main one is the Australian Catholic Coalition for Church Reform, which is an umbrella network of 19 Catholic organizations spread throughout Australia and New Zealand. They've published a booklet to inform Catholics about the upcoming plenary titled A Church for All: A Guide to the Australian Plenary Council and Beyond. 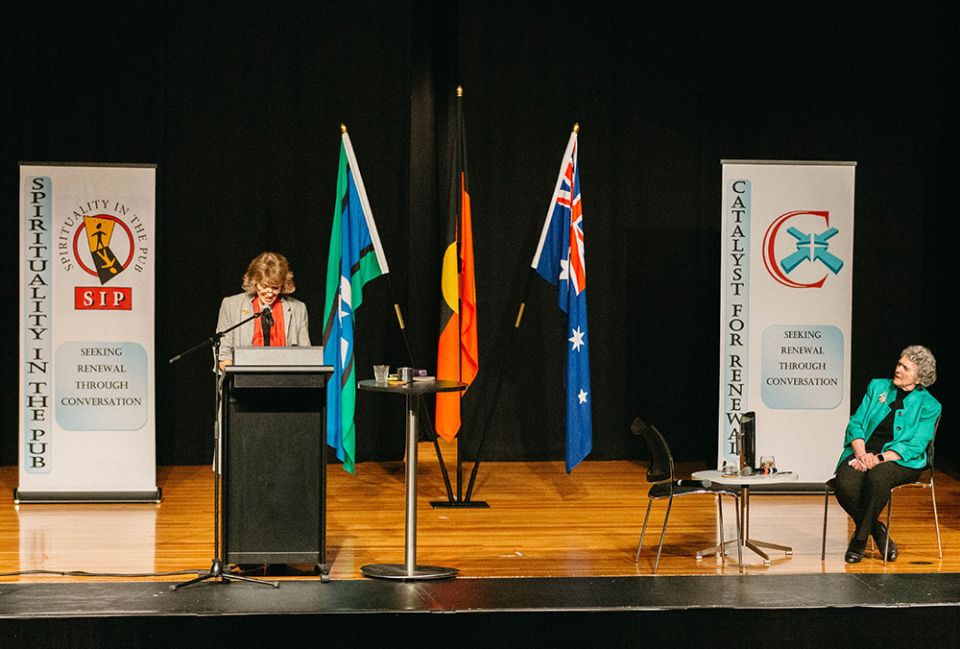 The coalition's main objectives revolve around getting women and laypeople truly included in the power structures and decision-making in the church. These goals are dear to Chittister's heart and she's a passionate and articulate advocate for them.

Chittister's speaking tour is designed to energize progressive forces in the lead-up to the second plenary in July, and she's impressed with the individuals and groups she's met here.

"I am amazed by these people," she told me. "I have not found such intensity, and such organization, such solidly thought-out and genuinely Catholic position on the plenary process as well as the synodal church that Pope Francis is asking for."

"But I also know from my experience here there is a lot of concern about whether or not the leadership is as committed to this as they are," she continued. "Now you put that together with a really ready lay organization who is owning the pope's hopes, the pope's call. If that is not satisfied on the local level with more than empty goodwill, if that isn't handled honestly and openly, this can have a bad effect on the church and that would be tragic."

Chittister's main public addresses were in Australia's biggest cities, Melbourne and Sydney. Her talk in both places was largely based on her latest book, The Time Is Now: A Call to Uncommon Courage, which is about prophetic spirituality: the need for all Catholics to be prophets and remain steadfast in standing up and speaking out. 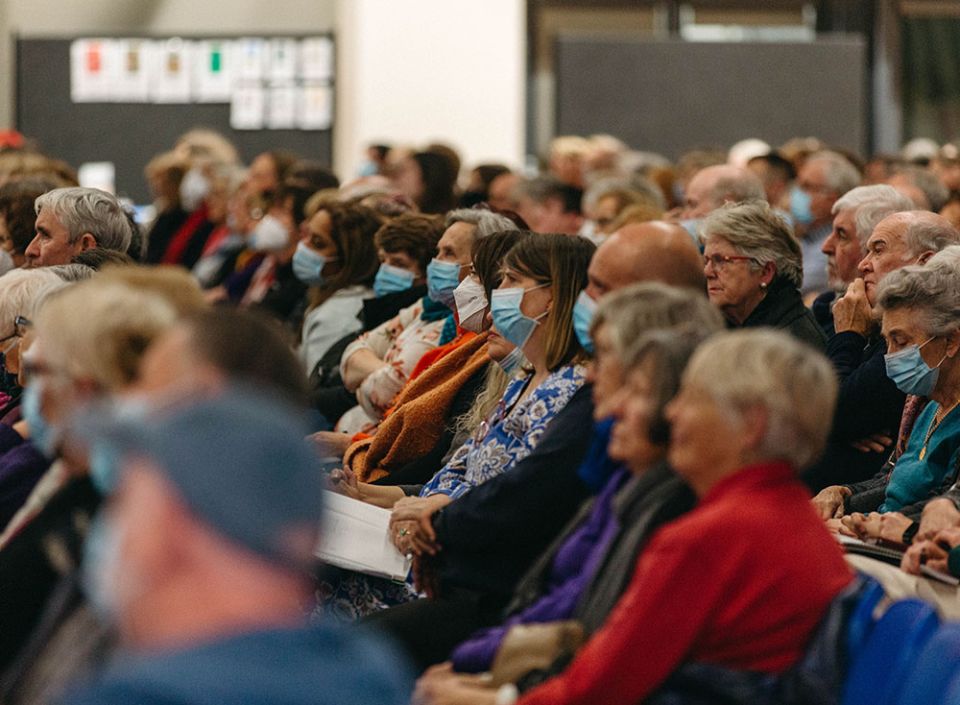 In Melbourne, she spoke at the city's grand Town Hall, which seats around 2,000 people and was almost sold out. The audience, predominantly women, was from a wide range of ages and backgrounds.

Eleanor Flynn, one of the organizers of Chittister's talk there, is a doctor specializing in palliative care and is co-convener of the Australian Catholic Coalition for Church Reform and a member of one of its constituent groups, Women's Wisdom in the Church, commonly known by its provocative acronym WWITCH. She noted the absence of any of the church hierarchy at the talk, particularly Melbourne's archbishop.

"There were priests there that I knew, and lots of nuns of various sorts, but not, as far as I know, any of the bishops," Flynn told me. "We would have noticed if the archbishop was there. It would have been wonderful if he had come, given that he blocked Joan's appearance in 2020."

In Sydney, Chittister spoke in the auditorium of a Catholic girls' high school to a mixed, mainly older audience of around 700 people. Again, some nuns and priests were present but none of the hierarchy was there. The forum was organized by another progressive group, Catalyst for Renewal, whose main aim is promoting dialogue in the church.

John Warhurst attended the talk in Sydney. He's a professor of political science and a long-term progressive activist in the Australian church. He's one of 80 lay members of the 280-strong plenary council and has published a book about this experience called Wrestling With the Church Hierarchy: Engaging with the Plenary Council and Beyond. He's chair of Concerned Catholics Canberra Goulburn, another group belonging to the Australian Catholic Coalition for Church Reform. He believes Chittister will inspire those seeking reform. 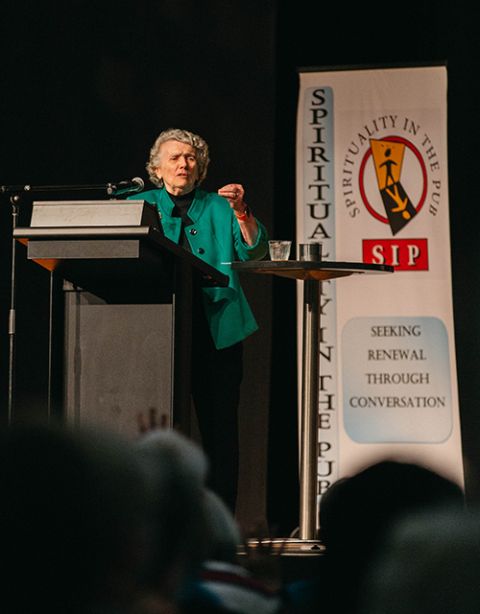 Benedictine Sr. Joan Chittister speaks in Sydney on May 31. (Courtesy of Catalyst for Renewal/Darcie Collington)

"A sense of a universal church is important for renewal here, a feeling that there are important voices around the world coming at church renewal from the same direction," said Warhurst. "And Joan Chittister is certainly one of those voices. As her talk showed, she has particular gifts for inspiration, which are rare. She speaks with a loud and strong voice. And she's a living example of someone who's clearly hanging in there, she's widely recognized as being a persistent advocate for reform, she's a true prophet herself."

Chittister's call for all to be persistent prophets also inspired Flynn, who's in the midst of her own struggles with the church.

"Joan spoke very much about the idea you've just got to keep doing it, there'll be endless setbacks but you just keep going," said Flynn. "I'm just hanging in there by my toenails in the church. But it's my church. I'm a baptized member and all the baptized are equal in this church. I believe it's better to try and change things from within than from outside. Joan's message has given me more hope about that."

Warhurst sees the success of the plenary in July as critical for the Australian church — that it's now, or perhaps never.

"There is a sense of urgency because many in the renewal movement are aging, there's a generational thing, and this is the last big opportunity for Vatican II Catholics, as they often describe themselves, to push on and make a difference," he said. "I think if nothing happens over the next five years, then many of the original members of the renewal movement will, in one way or another, not be active anymore."

"There is no doubt this is a crucial time," said Chittister, confirming the stance of many Australian Catholic activists. "Church leadership had the time in '65 after Vatican II when the church told the church what sort of church it wanted to become and they ducked that question. There was built-in resistance from leaders who were going to lose power, lose authority, lose control."

"In the Catholic Church, as the structure now stands, 1% of the population, the clerics, are the thinking mind of the church," she said. "But now you have education for everybody, you have more lay theologians in the Australian church than clerical theologians. Why wouldn't they be part of your resources when 99% of your church is the laity with all of the issues and questions and problems they raise?"

"So do you have an inclusive church or do you have a clerical establishment?" she asked. "That's the question laypeople want to have answered now, and I'm not sure if that will really be dealt with at this plenary."

A version of this story appeared in the June 24-July 7, 2022 print issue under the headline: Chittister tour excites Australian Catholic reformers . 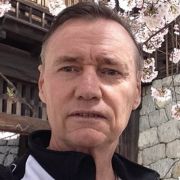 Peter Kirkwood is a freelance journalist specializing in coverage of religion based in Sydney. He has a master's degree in theology and worked for 23 years in the Religion Unit of the Australian Broadcasting Corporation.

Adopting political tactics at synod is understandable, but misplaced