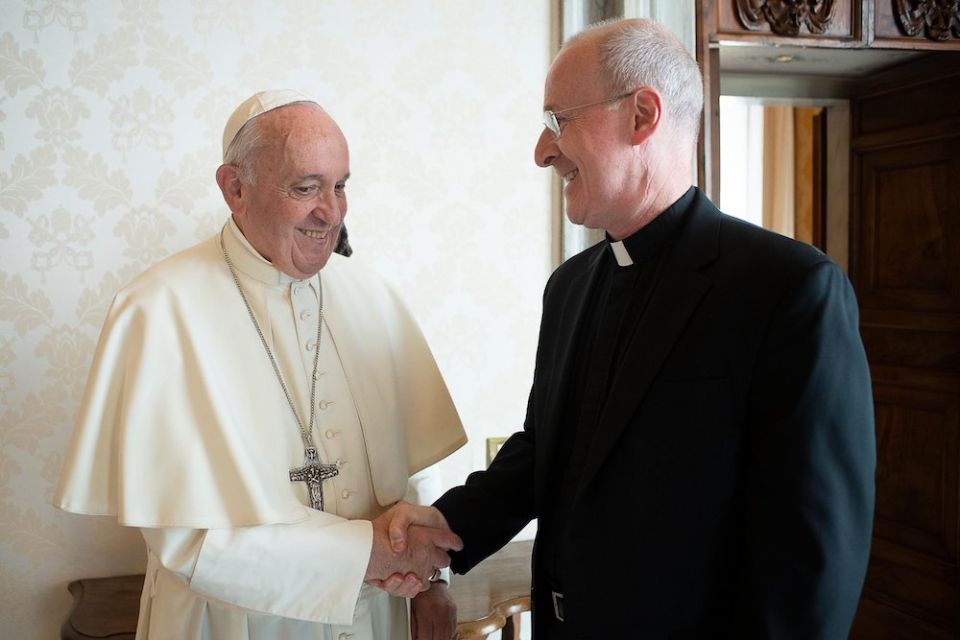 Pope Francis greets Jesuit Fr. James Martin, author and editor at large of America magazine, during a private meeting at the Vatican in this Oct. 1, 2019, file photo. Martin released a recent handwritten letter from the pope that commended his LGBT ministry. (CNS/Vatican Media)

Pope Francis praised Jesuit Fr. James Martin's work with LGBTQ people, saying his ministry seeks to "imitate the style of God" in a handwritten letter sent to Martin ahead of a June 26 conference on Catholic outreach to those in the marginalized group.

"I want to thank you for your pastoral zeal and your ability to be close to people, with the closeness that Jesus had, and which reflects the closeness of God," the pope said in an English translation of the letter (originally in Spanish), which Martin provided to NCR and has since posted on his social media pages.

Pope Francis @Pontifex has sent a beautiful letter on the occasion of the Outreach LGBTQ Catholic Ministry Webinar, which happened yesterday, expressing his support for this ministry and encouraging us to imitate God's "style" of "closeness, compassion and tenderness"... pic.twitter.com/O9nTftoLDi

A few weeks prior to the online conference, Martin — author of Building a Bridge: How the Catholic Church and the LGBT Community Can Enter Into a Relationship of Respect, Compassion, and Sensitivity — wrote to the pope and told him about the conference, inviting him to offer a greeting, Martin told NCR.

Later, Martin wrote the pope again, with a lighthearted note about how his nephew had just taken the confirmation name "Francis," and reminded him in a "P.S." about the conference, Martin said.

On June 21, the pope replied with the handwritten note.

In the note, the pope said Martin is a priest for all, just as God is a father for all, and encouraged him to continue to be compassionate and tender towards those he encounters.

Francis also said God is close to and loves all his children.

"His heart is to open to each and every one," Francis wrote. "He is a Father. God's 'style' has three elements: closeness, compassion and tenderness. This is how he comes closer to each one of us."

The pope said he prayed for Martin and all those in his flock, that they be protected and continue to grow in God’s love.

Francis' letter to Martin comes three months after the Vatican's Congregation for the Doctrine of the Faith approved a decree prohibiting Catholic priests from blessing same-sex unions, saying that God "cannot bless sin."

Many in the LGBTQ Catholic community found this decision painful and disheartening, part of a long history of harmful messages from the church about LGBTQ people. In response to the decree, over 100 theologians signed a pledge to support same-sex couples.

Some Catholic churches in Germany held blessings for same-sex couples as a protest against the policy.

Martin told NCR he thought the pope’s note was "beautiful."

"It's a wonderful sign of the Holy Father's support not only for my own ministry to LGBT Catholics, but for all in the ministry," said Martin. "It is a sign of the pope's love for LGBTQ Catholics, and, most importantly of all, a reminder of how much God loves LGBTQ people — with 'closeness, compassion, and tenderness.' "

A version of this story appeared in the July 9-22, 2021 print issue under the headline: Pope praises James Martin's work with LGBTQ Catholics . 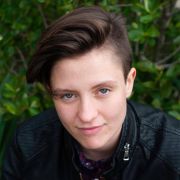