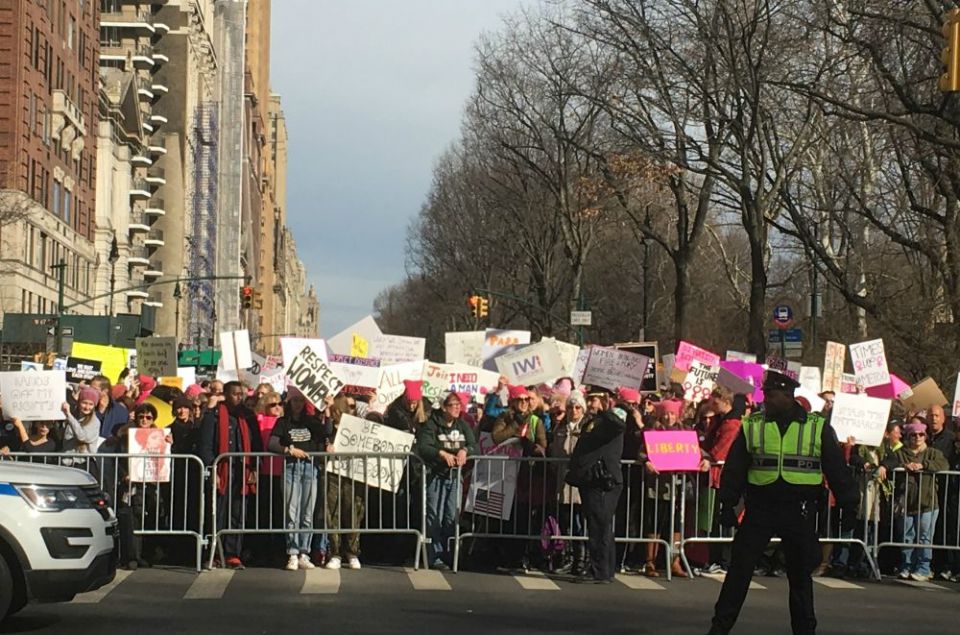 People wait until crowds thinned enough in New York City to participate in the Women's March, Jan. 20, 2018, the second annual event in reaction to the inauguration of President Donald Trump. (NCR/Jamie L. Manson)

When her state representative voted against proposed gun safety laws after the school shooting in Parkland, Florida, Marybeth Redmond was outraged. It was just one more example of elected officials not reflecting her social justice views and those of her community.

So Redmond joined a meeting of activists to brainstorm possible candidates to run against the nine-term member of the Vermont House. To her surprise, several attendees suggested she run. It was a "wake-up call," she said.

She had sensed a change in the political climate during the 2016 presidential election. Like many of the women running in 2018, she was among the hundreds of thousands on the National Mall for the Women's March after Donald Trump's inauguration in January 2017. She was ready to do something, to get more involved, but run for office?

At first, she declined, but after a couple of weeks of discernment and prayer, Redmond said she felt the call to serve as a candidate for and possibly holder of public office. 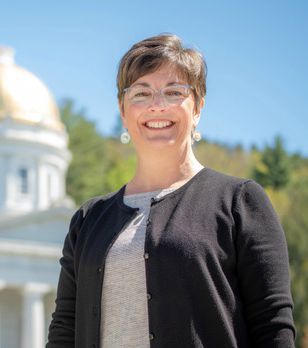 "If you had asked me if this was on my list of aspirations, I would probably have said no," she told NCR. "But I'm definitely motivated to run at this time by the events playing out in our country, all the fear-based rhetoric about people who are perceived as 'other.' "

A record number of women have declared their candidacy this year, so many that it's being called "The Year of the Woman." Record numbers of women have filed as candidates for congressional seats and governorships, according to the Center for American Women in Politics (CAWP) at the Eagleton Institute of Politics at Rutgers University, whose "Gender Watch 2018" is tracking the national midterm elections.

Like most of these new candidates, Redmond is a Democrat. She also is a Catholic — a progressive one. And she's not alone.

Although data about religious affiliation is not available, the "pink wave" in this election cycle includes a number of progressive Catholic women for whom Catholic Social Teaching has informed and inspired their campaigns.

But they aren't running as "Catholic candidates," nor are they overtly connecting themselves with the U.S. bishops and conservative elements in the church that identify abortion, gay marriage and religious liberty as defining issues — issues that ultimately led about half of U.S. Catholic voters to choose Donald Trump in 2016.

Days after her primary victory, Ocasio-Cortez outed herself as a Catholic in an article in which she argued for criminal justice reform based on Catholic teaching about forgiveness. She also cited Jesus' instruction in Matthew 25 to care "for the least among us" as a "guiding principle."

Bibiana "Bibie" Boerio uses the same scripture passage to identify herself as a "Matthew 25" or "Vatican II" Catholic. Beorio is running for the U.S. House in Pennsylvania's newly created 14th District.

"I believe the Lord said to us that if you see somebody who is hungry and thirsty, you take care of them," Boerio told NCR. "We have lost that element of compassion and care for our brothers and sisters."

"My religion is an important part of who I am: I'm American and I'm Catholic," she said.

Yet these candidates are not exactly shouting their Catholicism from the rooftops. Boerio's biography on her website mentions that she served as interim president of Seton Hill University, a Catholic school in Greensburg, Pennsylvania, but does not explicitly identify herself as Catholic.

Googling "Catholic" and a number of the new female candidates' names results in a couple news stories about some who grew up Catholic, but few who are touting it. This was even true of some of smaller number of new Republican female candidates. 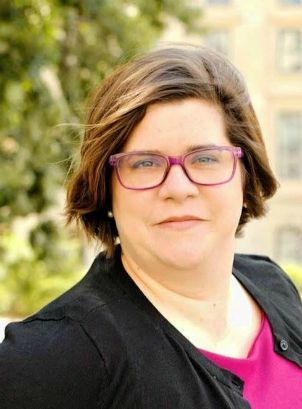 Across the state, in Pennsylvania's 5th Congressional district, Mary Gay Scanlon, who beat nearly a dozen other Democrats in the primary, briefly mentions how growing up in a large Irish Catholic family shaped her values. Buried in the biography of Aidan Loveland Koster, a Democrat running for the Kansas House, is the fact that she met her husband in the church choir at St. Lawrence Catholic Campus Center at the University of Kansas. And Paulette Jordan, who would become the country's first Native American governor if elected in Idaho, was raised Catholic but describes herself as "very spiritual."

One explanation for candidates' lack of overt Catholic identity may be the well-documented rise in disaffiliation with religious institutions among younger Americans. This year's wave of women candidates tend to be younger, according to the Women's Campaign School at Yale University, which reported that the median age for attendees has dropped from mid-40s two decades ago to around 30 this year.

Younger women candidates seem to reject labels, including party and perhaps religious affiliation, to explain who they are, said Erin Cutraro, CEO of She Should Run, a nonprofit organization trying to expand the pool of women running for office by offering resources to first-time candidates.

"Instead, it's, 'I'm going to run as me, without the labels,' " Cutraro said. "These women feel they can talk about values without the identifiers that might alienate others."

And religion, in particular evangelical Christianity and Catholicism, can be an alienating identifier linked to the GOP and to President Donald Trump.

And this year's election is definitely about Trump: whether you're for him or against him, said Steven P. Millies, associate professor of public theology and director of the Bernardin Center at Catholic Theological Union in Chicago.

Unfortunately, the Catholic Church doesn't have much credibility with progressive voters who want to vote against Trump, Millies said.

At a local boot camp for first-time female candidates, Redmond didn't notice any other candidates there talking about their Catholic faith and suspects few progressively political women candidates are overtly Catholic.

"I love the church and would never be who I am without it," said Redmond, a member of Holy Family-St. Lawrence Parish in Essex Junction. "But it can be a really hard place to be as a feminist woman."

Millie agrees: "The polarization outside the church and inside the church are wrapped around one another," he said. "As much as Republicans have a brand identity problem with women, so does Catholicism."

Of course, much of that has to do with the church's fight against the legalization of abortion and what some see as an emphasis on that issue to the exclusion of other justice ones. In his book, Good Intentions: A History of Catholic Voters' Road from Roe to Trump, Millie argues that Roe vs. Wade, the Supreme Court decision legalizing abortion, marks the beginning of a long road to today's political polarization.

But those who oppose abortion are not monolithic in their approach to the issue. Maintaining reproductive rights is a priority for some Democratic candidates, while others contend that strengthening social safety nets will continue to decrease the numbers of abortions.

The issue was not among the top priorities for the candidates interviewed for this article — at least before Supreme Court Justice Anthony Kennedy announced his retirement, prompting questions about the possible overturning of Roe vs. Wade.

Boerio said, if elected, she would defend the legality of abortion, despite her own personal views, because of the Constitution's separation of church and state. She has described herself as "whole-life pro-life," which probably fails to satisfy those on the extreme right or left on that issue.

"I believe that every woman and her doctor need to the make the decision that's right for them," she said. "I don't think politicians and government or religious officials should be involved in that."

Jordan of Idaho describes herself as personally "pro-life" but says she supports legalized abortion. "When I say pro-life I don't want to over-politicize it. It just means that I'm respectful of all life," Jordan told a website that caters to millennials.

All politics is local

For women running in lower-ticket races, other issues beyond abortion are more pressing.

A controversial soda tax and revenue-generation were key for Chicagoan Bridget Degnen, who beat a long-term Democratic Cook County Board representative in this year's primary, by emphasizing economic, safety and environmental issues.

Degnen was inspired by her involvement in the Women's March and by fellow members of a local group of women attorneys to get involved in politics.

"But what really kicked me in the butt was the Trump inauguration: seeing him win despite how he has treated women," she said.

Degnen's Catholicism is not front and center in her campaign, but her desire to step up and be part of changing the political culture flows from her Catholic — and feminist — ideals.

"Having more gender equality is important," said Degnen, who attends St. Benedict Parish. "We need to support women who are willing to run."

Since she has no Republican challenger, Degnen has already secured her place on the County Board and looks forward to getting things done for her constituents and collaborating with other elected officials.

That urgency to change things unites the majority of first-time female candidates, progressive Catholics included. They may have already been involved in issues in other ways, but eventually came to see public office as a way to have a wider influence on things that matter, said Cutraro of She Should Run.

"What we're hearing from women is that no longer is the status quo acceptable," she said. "Women see that their voices are often not represented in important policy discussions, and they want to change that."

Millies hopes it does even more than that. "In the end, the 'blue wave' or 'Year of the Woman' is only meaningful if it actually leads to political change, to a different and better conversation."

For Redmond, who has worked with "folks on the margins," running for state representative is a next step that will allow her to help change unjust systems that hurt the underemployed, the incarcerated and women.

If elected, Redmond wants to "lift up the voices of those without a voice and work for just systems that serve everybody," she said. "We need to take back our country."

A version of this story appeared in the Sept 21-Oct 4, 2018 print issue under the headline: Progressive Catholic women join 'pink wave' .

Links: Evil in conservativism; unions are good for all; parody of wokeism