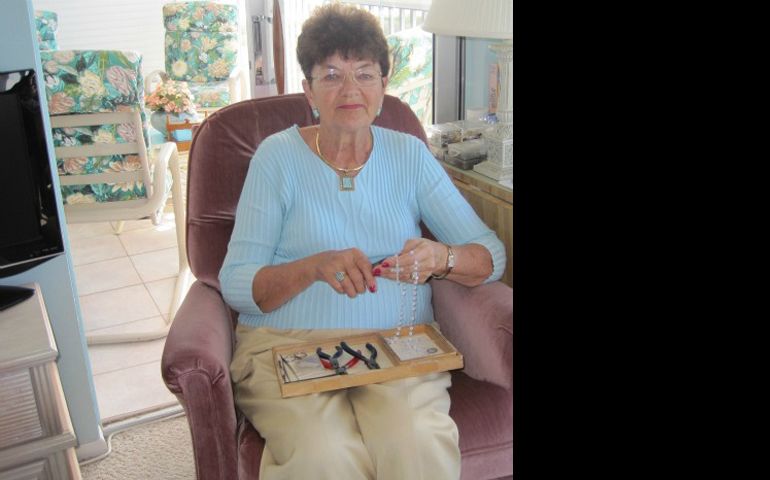 At age 75, Betty Holden is on a crusade to repair broken rosaries. She's been at it for almost 20 years, spending several hours a day behind a pair of needle-nose pliers. (RNS/Courtesy of Betty Holden)

Simsbury, Conn. — Betty Holden in on a crusade to take broken rosaries stashed away in dresser drawers and give them new life and put them back into service.

The 75-year-old retired travel agent has been making and repairing rosaries for almost 20 years. She spends several hours a day behind a pair of needle-nose pliers repairing rosaries that she sends back into the hands of the faithful and overseas to missionaries.

She gets help from her husband, Dick, who she said "never prays the rosary and goes to church just in case." His main job is cutting string for the strands of beads.

"I'm the lowly string cutter," joked Dick Holden, 76, who got roped into helping his wife after she broke her wrist rollerblading a few years ago. "She's the boss and chief inspector."

For Betty, repairing rosaries is a labor of love and a devotion to the Virgin Mary, whose presence she said she feels with every bead she threads.

"Even if you are just quietly holding them, you feel your heart slowing down," Holden said.

The Holdens' mission started in 1997, when they put a small "broken rosary repair service" notice in their parish bulletin at St. Mary Church in Simsbury, Conn. After Reader's Digest ran their notice in the magazine, requests came pouring in from all over the globe. To this day, their notice appears in church bulletins as close as Northhampton, Mass., and as far away as Africa.

The couple never stops repairing and making rosaries. They even lug their supplies -- plastic containers filled with beads of every kind, crucifixes, string and tools -- to Fort Meyers Beach, Fla., where they spend the winter months.

The Holdens don't charge for their service, but they will gladly accept a $2 or $3 donation to cover their shipping costs and any supplies. Aside from repairing rosaries, they ship rosaries that are made by about 30 volunteers in Connecticut.

"The rosary holds a special power for the brothers -- especially for those who can't attend Mass. Some are bed-ridden brothers here and require medical treatment, they can't get together in the chapel with their brothers to pray," he said.

Zilli said many of the rosaries the Holdens send him are given to prisoners at the nearby Sing Sing Correctional Facility. Others he ships to the Universal Living Rosary Association in Dickinson, Texas, which sends them to missions around the world.

"(The Holdens) have been good to me. They fix 'em up very good. They are easy to break. I used to repair them but I stopped because I don't repair them right and they fell apart," Zilli said.

Holden said by cycling through the rosary, a person comes to understand the birth, passion and resurrection of Christ, and the history of human redemption.

But rosaries also hold the history of those who own them.

"People know their rosaries. They say to me, 'Oh these were blessed by the pope, or they were given to me on my First Communion, or these belonged to my mother,' " Holden said. "Whatever shape they come to me, I'm going to make them look great again."

[Ann Marie Somma is the editor of Hartford Faith & Values.]