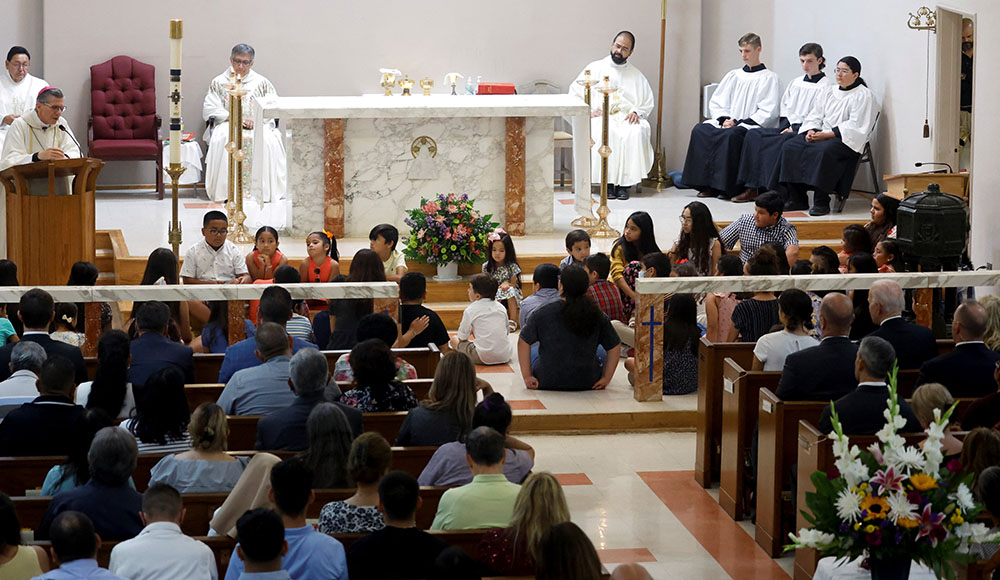 San Antonio Archbishop Gustavo García-Siller, who has been helping minister to the families of the children and teachers murdered in the May 24 mass shooting at an elementary school in Uvalde, Texas, has praised President Joe Biden for his visit to the community over the weekend.

"I am aware of other situations going on in the world, war, and some meetings that even the next day the president had to be attending. But you can tell, they were there for them. [The families] appreciated that very much," the archbishop said.

García-Siller celebrated the Sunday Mass that day at Uvalde's Sacred Heart Church, which was also attended by the Bidens. He said the first couple — Joe Biden is only the nation's second Catholic president — "were so comfortable at Mass."

García-Siller said the White House had arranged that no media would be present in the church, which he called "good in the sense that people were able to express themselves without any other concern."

The archbishop recalled one particular moment from the Mass. He said that before starting the homily, he asked the about 30 children in the church to come forward and sit in the sanctuary for the sermon. He said one mother came forward with her baby and couldn't find a place to sit.

"The president and his wife, they moved over in the pew and they welcomed her to be where the president was sitting. It was a beautiful expression of being in touch with what's going on," said García-Siller. "That was very beautiful."

Several of the families of the 19 children and two teachers killed in the Uvalde shooting are Catholic. The archbishop said Sacred Heart Church is planning 11 funerals for victims in coming days. The first funeral at the church, for 10-year-old victim Amerie Jo Garza, took place May 31.

García-Siller said people across Uvalde have gone through many phases of grief in the past week. At first, he said, people were "kind of numb" and could not believe what had happened. "People who will never forget what they experienced," he said.

The archbishop praised the work of local clergy, including Sacred Heart's pastor, Fr. Eduardo Morales; and Fr. Matthew De Leon, pastor of St. Joseph Parish in the nearby town of Knippa.

García-Siller said he sees the job of the archdiocese as helping the victims' families on an individual basis. "The whole journey has been so far to pay attention to where they're at," he said. "And each family is in a different place and [there are] different circumstances in the family."

"Pray that we will, along the way, walk at [the families'] pace," asked the archbishop. "Otherwise, we are not helpful."

García-Siller also lamented the frequent pace of mass shootings in the U.S. and suggested the country requires "a change of heart, a change of minds, a change of rhetoric."

"We are a great country with great achievements," he said. "But the quality of humanity in our country is fading away. It's decadent. Interests are very short-minded. The agenda is controlled by very few."