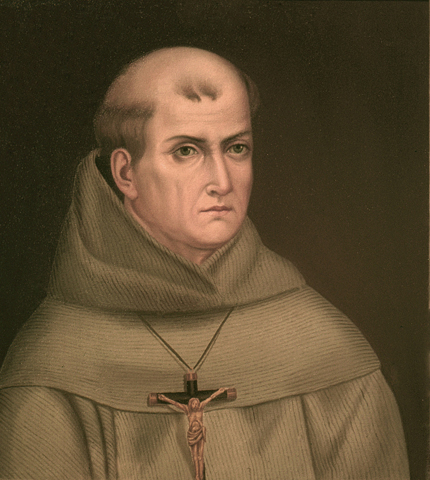 When Pope Francis unexpectedly announced last month that he would canonize Fr. Junipero Serra during his visit to the U.S. in September, he thrilled the many fans of the legendary 18th-century Spanish Franciscan who spread the Catholic faith across what is now California.

But the pope who has decried the "ideological colonization" of the developing world by the secular West is now facing criticism from those who say Serra -- called "the Columbus of California" -- abused Native Americans and pressured them to convert, aiding in the devastation of the indigenous culture on behalf of the Spanish crown.

Some of Serra's sharpest critics say he was part of an imperial conquest that beat and enslaved Native Americans, raped their women, and destroyed their culture by forcing them to abandon their traditional language, diet, dress and other customs and rites.

Add in the diseases introduced by these Old World invaders, and the original indigenous population of perhaps 300,000 was decimated by as much as 90 percent.

"If [Serra] is elevated to sainthood," Nicole Lim, the executive director of the California Indian Museum and Cultural Center in Santa Rosa, told The New York Times, "then [Serra] should be held responsible for the brutal and deadly treatment of native people."

Serra's defenders acknowledge the dark side of his legacy but argue that it's not fair to judge this 18th-century missionary by 21st-century standards. They argue that he was a moderating influence on his fellow Spaniards and frequently pleaded for more merciful treatment for the Native Americans under their control.

"He lived in a very difficult time and he did the best he could under very difficult circumstances," Fr. Edward Benioff, who oversees evangelism for the Los Angeles archdiocese, told the local NBC affiliate.

For Francis -- who once again dispensed with the usual protocols of Vatican saint-making and stunned even Serra's official advocates with the canonization announcement -- the main reason for honoring the Spaniard seems to be that he underscores what Francis says should be the church's missionary focus.

But Serra was a missionary of a different era. Born on the Spanish island of Majorca in 1713, he joined the Franciscans at 16 and quickly gained a reputation for his preaching and theological expertise. He arrived in Mexico City in 1750 to fulfill his dream of being a missionary, and in 1769 he established his first mission at San Diego as head of a group of Franciscans tasked with evangelizing California, then part of New Spain.

He would go on to help found another eight missions up the coast through the San Francisco Bay Area, a network that would eventually grow to 21 missions all together.

Despite ill health, Serra worked tirelessly to make the missions self-sufficient. He eventually succumbed to his ailments and died in 1784, at the age of 70, near Monterey.

How far this controversy will resonate during Francis' U.S. visit is unclear.

The pope remains enormously popular among American Catholics and the wider public. And Francis said that as much as he would have liked to go to California to canonize Serra, he will have to keep his itinerary to the East Coast cities of Philadelphia, New York and Washington.

That means he will canonize Serra at a Mass in the nation's capital, far from the West Coast epicenter of the controversy and near the U.S. Capitol building, where a statue of Serra is one of two California monuments to state heroes.

Between now and the pope's arrival in September, the arguments surrounding Serra's legacy are also likely to get a wide airing and maybe a greater consensus.

Serra "was uncompromising," Steven Hackel, a history professor at University of California, Riverside and author of a biography of Serra, told Catholic News Service. But Hackel said working through the controversies "will be a good thing."

"It can lead to reconciliation and mutual understanding," he said.

A version of this story appeared in the Feb 27-March 12, 2015 print issue under the headline: Some see American saint-to-be as less than holy.