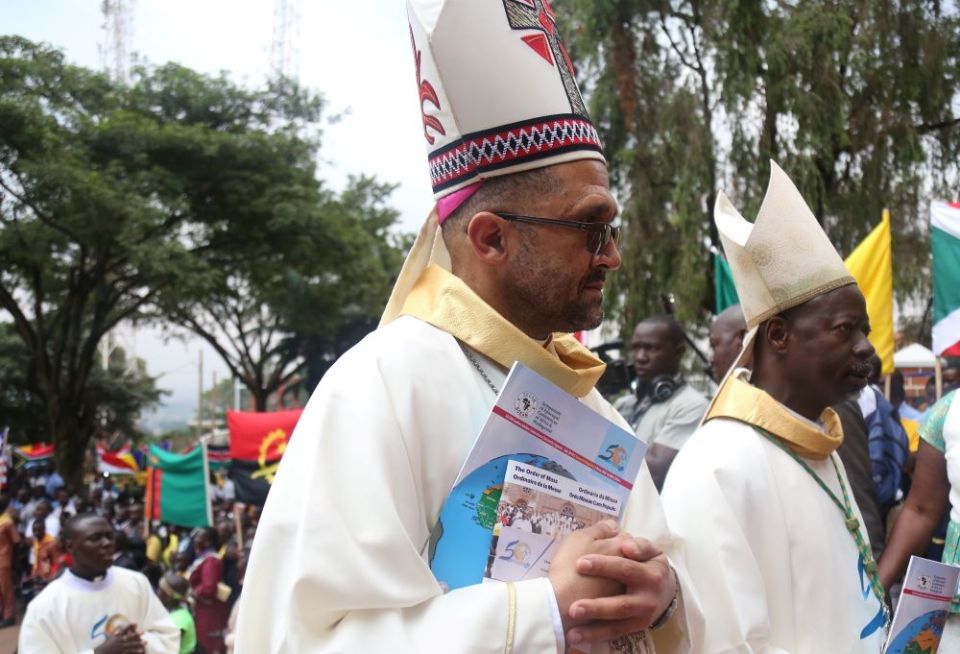 Bishop Sithembele Sipuka of Mthatha, South Africa, (left) is shown here at the opening Mass of the weeklong meeting of the Symposium of Episcopal Conferences of Africa and Madagascar in Kampala, Uganda, July 21, 2019. (CNS/Courtesy of SECAM)

NAIROBI, Kenya — The Catholic Church teaches that the Eucharist is "the source and summit of the Christian life." For at least one South African bishop, this teaching raises concerns about the global and local priest shortage that means some Catholics receive the Eucharist once a month or less.

"This is where I would enter the debate," said Bishop Sithembele Sipuka of Mthatha Diocese, a rare voice among the African Catholic hierarchy to voice his support for ordaining "proven married men" to the priesthood.

"For this, there is a need," he told NCR, during an interview in July at the Pan-African Catholic Congress on Theology, Society and Pastoral Life in Nairobi, Kenya.

"In rural dioceses, the communities are scattered," he said, describing scenarios of priests traveling long distances to celebrate multiple Masses. Even then, certain communities go for over a month without the Eucharist due to the priest shortage, he said.

Sipuka's proposal is not a new one.

Bishop Fritz Lobinger, a missionary from Germany who led the South African Diocese of Aliwal 1987 to 2004, has been a longtime proponent of ordaining married men to the priesthood to reach communities in need of the sacraments.

In 2019, delegates at the Vatican's Synod on the Amazon also requested that Pope Francis allow for the priestly ordination of married men on a regional basis, though the pope has not moved the issue forward.

The 62-year-old Sipuka, who is president of the Southern Africa Catholic Bishops' Conference, which includes South Africa, Swaziland and Botswana, said that bishops throughout the continent are engaged in a respectful dialogue on such proposals.

"I have not picked up any strong agitation against it or strong opposition," he said. "We are discussing it."

He also said he thinks proposals of this magnitude take time and that it is necessary to build unity in the process.

"It's good when these things happen that everyone is on board about it," he said. 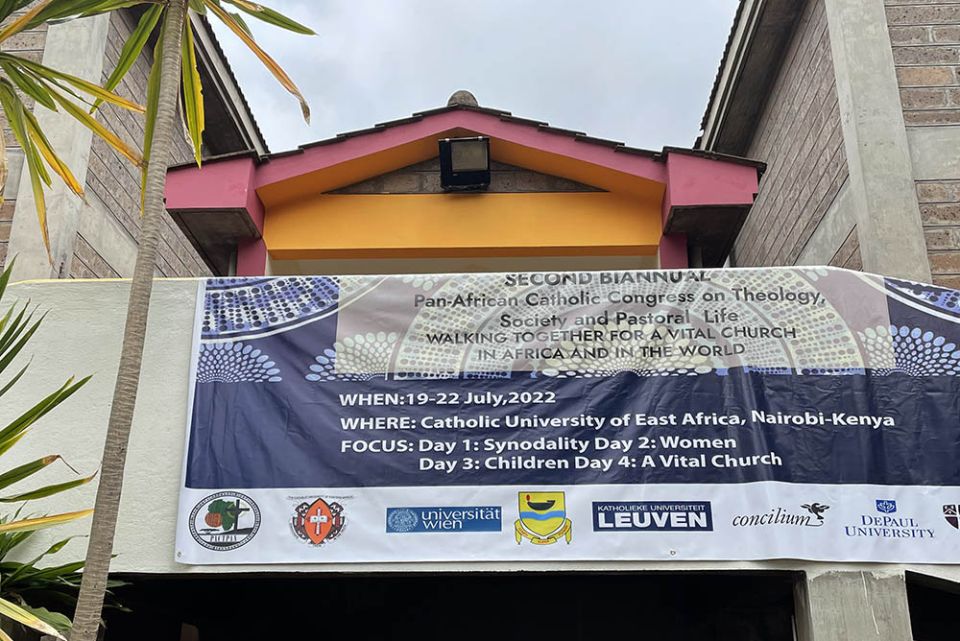 Outside the entrance of the Catholic University of Eastern Africa in Nairobi, Kenya (NCR photo/Christopher White)

Discussions on the celibate male priesthood is among the many topics that have surfaced as part of the Catholic Church's newly revamped global synod process, meant to encourage greater participation of Catholics throughout the world. The three-phase process has just concluded the initial diocesan stage and now moves on to a continental one.

Sipuka said the results of the surveys and listening sessions in his diocese evidenced "a lot of enthusiasm" for the synod.

"Even as we are answering questions, we are beginning to understand and implement the synodal nature of the church," he said. "This is not like those synods where you answer questions and then it goes to Rome" and the process is complete.

"We will only be continuing and intensifying," he said.

For his part, Sipuka said he hopes that the synod process is one that is empowering to the laity to invest more deeply in their contributions to the life of the church.

He went on to cite Pope Francis' 2013 apostolic exhortation Evangelii gaudium, often considered the blueprint for his papacy.

In it, the pope encourages priests and bishops to have the "smell of the sheep," or of their flock.

"The pope is not talking to bishops and priests only," Sipuka said, adding that "the whole church must do this."

"The church, according to Vatican II, is all of the people of God," he said, adding that this means the laity should be invested in and leading the church's outreach to the world around it.

Sipuka praised the Vatican's synod office for its outreach to African church leaders during the synod process so far. But asked about the overall lack of representation of Africans in the Roman Curia, he said he is "concerned."

Following the departure of Ghanian Cardinal Peter Turkson as head of the Vatican's office for peace and justice in December, no Vatican dicastery is currently headed by an African prelate.

Given what he described as the "inclusive" nature of the synod process thus far, he says he hopes that this might help provide a course correction for African leadership in the Vatican, as well.

Asked to describe what he felt would be the particular African contributions to the synod, he highlighted the continent's vibrant and exuberant spirituality, along with its commitment to local communities.

"We are still really a young church," he said, noting that this presents both challenges and opportunities. "But here the synodal church has begun."

A version of this story appeared in the Sept 2-15, 2022 print issue under the headline: Bishop says Curia needs more African leadership to reflect church's global realities .

Vatican approves special 'Mass in the Time of Pandemic'

Study indicates wide rejection of new translations by US clergy