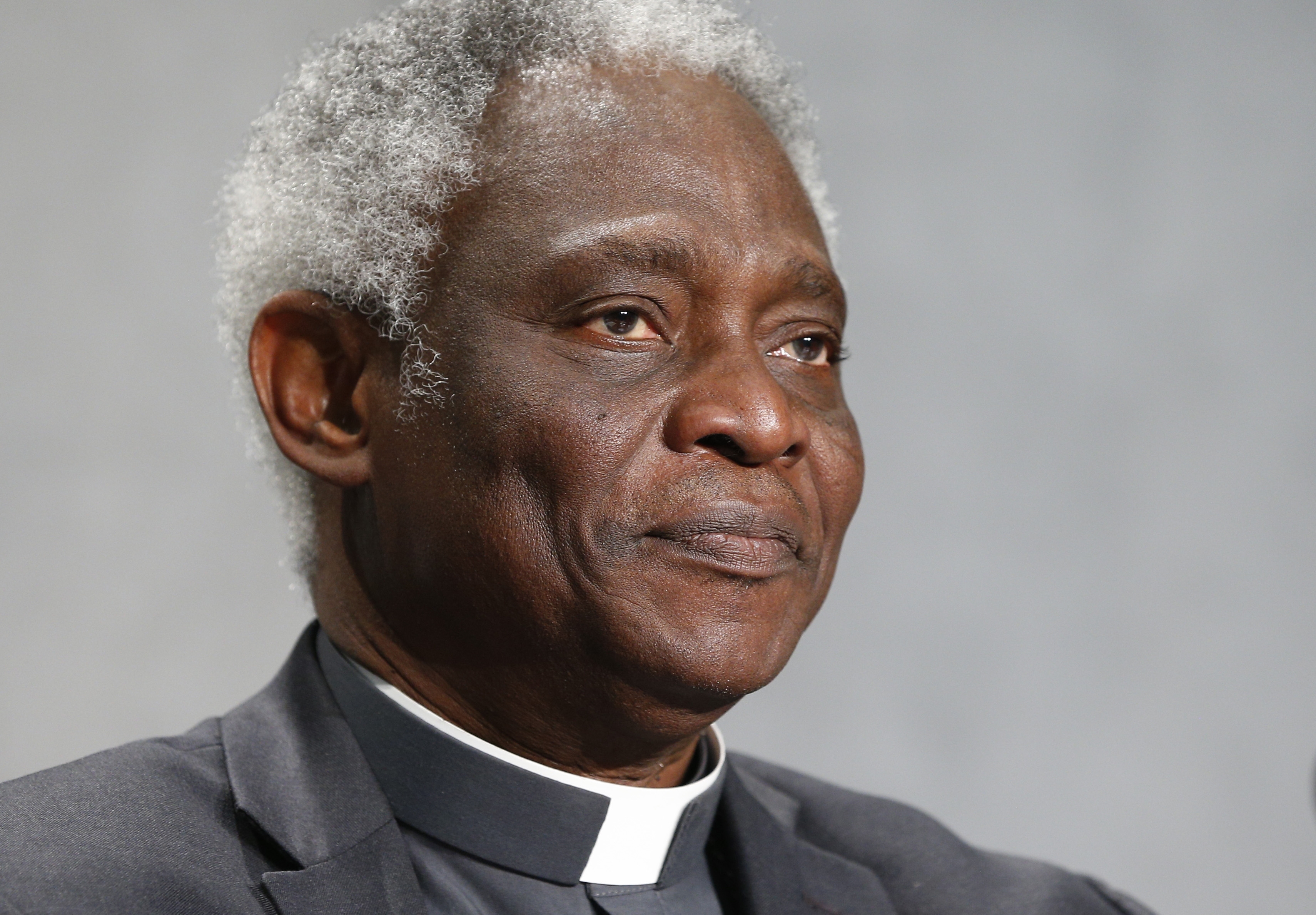 Cardinal Peter Turkson, prefect of the Dicastery for Promoting Integral Human Development, is pictured in a 2018 file photo. While the coronavirus pandemic gripping the world highlights the frailty of human life, it is also an opportunity for people to unite in solidarity, Cardinal Turkson said in a statement.(CNS photo/Paul Haring)

ROME — Pope Francis on Dec. 23 accepted the resignation of Cardinal Peter Turkson as head of the Vatican's office for peace and justice, signaling a complete organizational overhaul of the department's leadership following an investigation into its governance and operations earlier this year.

The Vatican announced the high-level departure in its daily bulletin, which followed several reports that the cardinal would soon be departing his office.

On Dec. 19, Turkson's official Twitter account confirmed that he had submitted his resignation to the pope, explaining that it is custom for Vatican office heads to do so at the end of a 5-year mandate. Turkson said that his term began in 2016 and he would await word from Francis as to whether it would be renewed.

A Dec. 23 statement from the Holy See press office said that the pope "sincerely" thanked the 73-year-old Ghanian cardinal for his service. The statement noted that the operations of the department would be entrusted to Jesuit Cardinal Michael Czerny in the interim and Salesian Sr. Alessandra Smerilli as secretary until a new director is named.

Smerilli has served as interim secretary of the dicastery since August and Czerny heads its migrants and refugees division, making it the only office in the Vatican that had been served by two cardinals.

Turkson has worked in Rome for over a decade, and has been prefect of the Dicastery for the Promotion of Integral Human Development since its formation in January 2017.

His resignation follows an inquiry announced in June. It was led by Cardinal Blase Cupich of Chicago at the behest of Francis. Over the last year, Francis has ordered similar investigations in both the Vatican's Congregation for Divine Worship and the Discipline of the Sacraments and the Congregation for Clergy to assess their operations.

Following the investigation into the Integral Human Development dicastery, there have been a number of shake-ups in the office.

In August, Francis named Smerilli as interim secretary of the dicastery, where she has served as Turkson's number-two since then.

The 46-year-old Italian is an economist, an adviser to the governing office of Vatican City State, and a consultant to the Synod of Bishops. Prior to her appointment as interim secretary, she served as the dicastery's undersecretary for faith and development. She replaced both Msgr. Bruno-Marie Duffé, who served as dicastery secretary since 2017, and Argentine Fr. Augusto Zampini, who was appointed adjunct secretary of the dicastery by Francis in 2020.

From 2009 to 2016, Turkson served as head of the Pontifical Council for Justice and Peace, until the creation of the new dicastery in 2017.

Under its revised mandate and expanded profile, the office combined the responsibilities of the former pontifical councils for Justice and Peace, Migrants and Travelers, Cor Unum and Health Care Ministry. The expansive dicastery also leads the Vatican's COVID-19 pandemic response commission and is widely viewed as the hub for implementing Francis' social agenda.

Once considered papabile, meaning a possible contender for the next pope, Turkson was a key drafter of Francis' 2015 environmental encyclical Laudato Si' and has regularly represented the Vatican at the United Nations, the World Economic Forum and other high profile global forums.

Prior to coming to Rome, Turkson previously served as the head of Ghana's Cape Coast Archdiocese. He was created a cardinal by Pope John Paul II in 2003, making him at the time Africa's youngest cardinal. Following his departure from office, no Vatican dicastery will be currently headed by an African prelate.

On Dec. 23, Turkson attended Francis' annual pre-Christmas speech to the Roman curia, and following the address the two exchanged a cordial greeting, where they could be seen laughing together.

Turkson remains two years shy of 75, the mandatory age when bishops are required by church law to submit their resignation to the pope.

Upon leaving office, he will retain the rights connected to the cardinalate, including the right to participate in any possible future conclave until the age of 80.