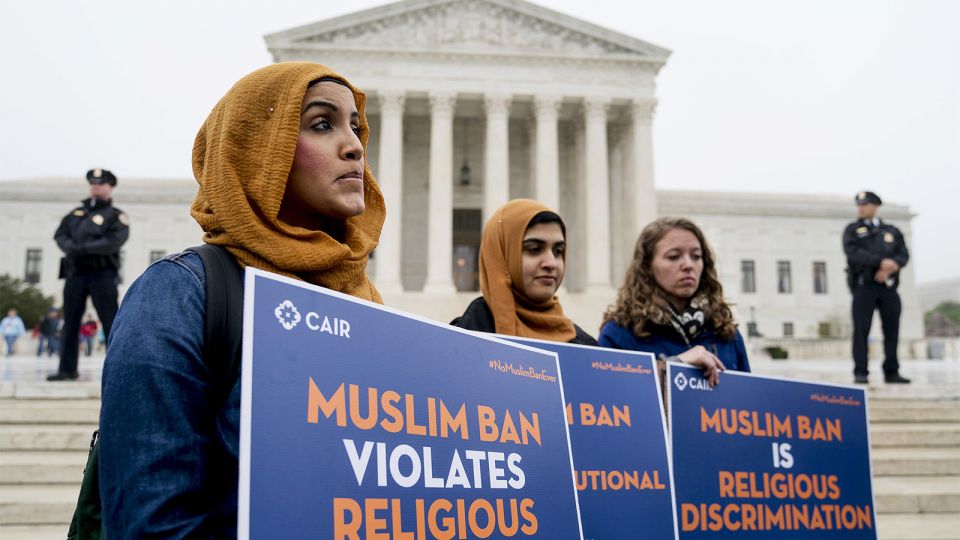 Zainab Chaudry, from left, Zainab Arain and Megan Fair with the Council on American-Islamic Relations stand outside of the Supreme Court for a rally opposing the travel ban as the court hears arguments about President Trump's ban on travelers from several Muslim-majority countries on April 25, 2018, in Washington. (AP/RNS/Andrew Harnik)

Washington — The U.S. Supreme Court has upheld President Trump's temporary ban on refugees and immigrants from a group of primarily Muslim-majority countries in a 5-4 decision, arguing it is within the executive branch's power to "suspend entry of aliens into the United States."

"The President has lawfully exercised the broad discretion granted to him … to suspend the entry of aliens into the United States," the decision, written by Chief Justice John Roberts, reads, citing a  statute in the United States code on inadmissible aliens.

"By its terms, (the statute) exudes deference to the President in every clause. It entrusts to the President the decisions whether and when to suspend entry, whose entry to suspend, for how long, and on what conditions. It thus vests the President with 'ample power' to impose entry restrictions in addition to those elsewhere enumerated in the (Immigration and Nationality Act)."

The decision, known as Trump v. Hawaii, spoke dismissively of the argument that the travel ban violates the Establishment Clause of the Constitution, which prohibits the government from establishing one religion: "Plaintiffs have not demonstrated a likelihood of success on the merits of their claim that the Proclamation violates the Establishment Clause."

Four justices wrote two different dissents to the decision. Justice Stephen Breyer, joined by Justice Elena Kagan, argued that there is some evidence that exceptions to the ban are not being applied narrowly and show "anti-religious bias," and would therefore "set the Proclamation aside."

Justice Sonia Sotomayor, joined by Justice Ruth Bader Ginsburg, said that review of the ban didn't "cleanse [it] of the appearance of discrimination that the President's words have created," later adding, "Based on the evidence in the record, a reasonable observer would conclude that the Proclamation was motivated by anti-Muslim animus."

The Court said it only considered the president's executive order in making its decision, not Trump's statements and tweets targeting Muslims, writing that "the issue before us is not whether to denounce the statements. It is instead the significance of those statements in reviewing a Presidential directive, neutral on its face, addressing a matter within the core of executive responsibility."

"This ruling will go down in history as one of the Supreme Court's great failures," he said in a statement. "It repeats the mistakes of the Korematsu decision upholding Japanese-American imprisonment and swallows wholesale government lawyers' flimsy national security excuse for the ban instead of taking seriously the president's own explanation for his actions."

Micah Schwartzman, a professor at University of Virginia School of Law who specializes in the religious clauses of the U.S. Constitution, called the decision "a straightforward win for President Trump."

"My read is that the 5-4 decision by the majority is a broader victory than many people expected," he said. "Many thought the court would dodge this case — but it didn't."

Schwartzman, who Sotomayor cites in her dissent, expressed frustration at what he described as the court "burying its head in the sand" by declining to consider Trump's various negative comments about Islam.

"This was the big case: this was when the court was faced with clear religious animus coming from the President of the United States," he said.

Schwartzman also argued there was a disconnect in the court's approach to the ban compared to a recent Supreme Court ruling in Masterpiece Cakeshop v. Colorado Civil Rights Commission. In that case, Justice Kennedy cited comments by CCRC officials supposedly deriding the religious beliefs of a baker who declined to make a cake for a same sex wedding as evidence of anti-religious animus — something Schwartzman argued the court ignored in their travel ban decision.

"There is deep and profound inconsistency from the court between Masterpiece Cakeshop and this case," he said. "The travel ban case casts Masterpiece under a deep cloud."

The travel ban has endured a near-constant deluge of criticism since then-candidate Donald Trump first proposed a "complete and total shutdown of Muslims" entering the country while campaigning for president in December 2015. After he was elected, Trump signed an executive order instituting a more specific version of the idea on Jan. 27, 2017, banning refugees and migrants from seven Muslim-majority countries.

The order triggered widespread protests at airports across the country, and an unusually broad spectrum of faith groups — including the Council on American-Islamic Relations, National Association of Evangelicals, U.S. Conference of Catholic Bishops, Religious Action Center of Reform Judaism and the National Council of Churches — either rejected or outright condemned the ban.

The ban was also immediately beset by legal challenges. Within days, courts issued a nationwide temporary restraining order restricting enforcement of large parts of the ban. Trump subsequently signed a new version of the executive order that, among other things, removed Iraq from the list of countries affected by the ban.

That, too, was met with lawsuits: The United States District Court for the District of Hawaii issued yet another temporary restraining order in March 2017 that prevented the amended version from going into effect.

The debate made its way to the Supreme Court, which issued a per curiam decision on June 26, 2017, that reinstated parts of the order and set oral arguments on the case for later that year. But a third version of the ban was also signed in September, prompting the court to delay the arguments (this version was also halted by a Hawaii judge in October).

Oral arguments in the case were finally offered before the court on April 25, 2018, with a wide swath of faith groups signing on to several amicus briefs siding with those condemning the ban.

The government defended the ban, arguing that the president has the authority to create immigration policy, that the ban itself doesn't amount to a "Muslim ban" that discriminates unconstitutionally and that Trump's comments about Islam during the campaign were "made by a private citizen before he takes the oath of office and before … (he) receives the advice of his cabinet."

But the state of Hawaii disagreed on several counts, arguing that since Trump has refused to disavow his previous remarks about Islam — such as "I think Islam hates us" — those comments still paint the ban.

Only 24 percent of black Protestants expressed support for the ban.

This is a developing story and will be updated.

A version of this story appeared in the July 13-26, 2018 print issue under the headline: Supreme Court upholds Trump's travel ban .