Urban mystic at the crossroads 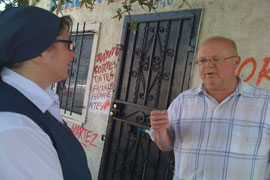 The Rev. Scott Young talks about his yearly pilgrimage to the intersection of Normandie and Florence, flash point of the 1992 Los Angeles riots. (Sr. Tracy Dugas)

The worst riots in urban U.S. history, or civil unrest as some prefer to call them, erupted on April 29, 1992, a reaction to the acquittal of four white Los Angeles policemen for using excessive force in apprehending a black motorist, Rodney King.

Racism and brutality, the lack of opportunities, poverty, historical and current official negligence on the part of the city governance and police, and reverse racism, all these socially flammable realities contributed to the 1992 Los Angeles riots.

Most years on April 29, Scott D. Young, an ordained Baptist minister, campus minister, and film lover, makes a pilgrimage to the intersection of Normandie and Florence in Los Angeles’ South Central district, the flash point of the 1992 riots. City officials don’t say “South Central” anymore. They know language and geography are important and by broadening the vast and racially diverse conceptual plain of urban life, perhaps some of the stigma will be dispersed and unrest forgotten. Scott is committed both to eliminating the stigma and remembering an event that cannot be erased.

Young is the cofounder and director emeritus of the City of Angels Film Festival (www.cityofangelsfilmfest.org). As he tells it, even before the 1992 riots, when he was adjunct professor at Fuller Theological Seminary in Pasadena, there was a movement to create on campus a film festival with religious themes. After the riots, Young suggested putting together a film festival that would celebrate motion pictures about Los Angeles and hold it in Hollywood, at the Directors Guild of America. This would be a gift to the city and a way to celebrate the arts, address the issues of the city, and to encourage peace and reconciliation. In 1994, the festival was born.

The theme of that first City of Angels Film Festival was “Los Angeles in the Movies: Dreams, Conflicts, Lifestyles.” The opening film was Lawrence Kasdan’s “Grand Canyon,” released in 1991, the year before the riots. It is about a man who gets lost in South Central after leaving a Lakers game and is accosted by a car full of black youths. The leader brandishes a gun, stating that because he has a gun, he has respect. John Singleton’s “Boyz n the Hood” was also released in 1991 and reiterates the power of the gun as a symbol of respect for African-American males.

“It is interesting to note, however, that the flash point of the 1992 riots was not about guns but about throwing beer bottles,” said Young. “The easy availability of guns and alcohol are obviously false attempts at handling the underlying conflicts that lead to violence. But these conflagrations get our attention so the community can work together toward more peaceful means of addressing issues that lead to conflict and finding lasting solutions.

“Los Angeles is a theologically vibrant city,” Young said. “There is a moral beauty to the aesthetics of this intersection, reflected in the buildings, the sidewalks, storefronts, and streets, the residents.”

At the City of Angels Film Festival this year Young organized a sidebar program to showcase two of what he considers to be the smartest films about Los Angeles. The first was “Killer of Sheep,” a 1977 UCLA student film by Charles Burnett. Never released in the United States because of issues over music rights, it is a perceptive look at the lives of African Americans struggling for identity, family, faith, meaningful work, and financial stability in Watts in the late 1960s, after the riots that shocked the nation in August 1965. The other film was David Lynch’s 2001 neo-noir psychological drama “Mulholland Dr.”

During the conversation after the screening of “Killer of Sheep,” Young mentioned the Rodney King riots and his annual pilgrimage to “the city” at the intersection of Normandie and Florence. On March 29, 2010, along with Sr. Tracey Dugas as our videographer, I accompanied Young on his pilgrimage a month early so I could write about it.

When I asked Young more about his background for making this pilgrimage to Florence and Normandie every year, he said, “I live in the suburbs of Los Angeles, and I was troubled by the suburban response: the judgmental attitudes, the distrust, the fear factor run amok.

“My pilgrimage here was and is a private journey and my small attempt at saying to anyone who cared that Florence and Normandie was not only a flash point for a riot but a sacramental place in which violence in the city happened. I wanted to experience it as a place of reconciliation, to pray for God to help us heal the city.

“When the riots broke out I was in Phoenix and watched the television coverage on my friend’s big screen television. It made the riots seem so very dangerous -- which they were. I took the first flight home on April 30 and could see the fires burning as we flew over the area during landing. I saw fires break out in Long Beach from my office. I began to reflect and internalize what was happening. How then should we live? ‘What then should we do?’ [Luke 3:10-11].”

Today, the intersection of Normandie and Florence is busy. A new gas station in on one corner, an auto parts store on the other; one of the liquor stores looted during the riots is still there and now there is a Subway sandwich shop, too. Traffic is heavy. But then a police car screams by, siren blaring. And soon a helicopter hovers overhead. The steady grunt and hum of stop-and-go traffic at the crossroads is interrupted as sounds of transgression and urgency evoke fear. Sure enough, a few minutes and a few blocks away, we tape three black and white police cars, and several black and white cops, dealing with some people. Offenders? The officers glare at us as we drive by.

Young says, “I love cities and I really love Los Angeles. I believe that God is involved in this place and its processes. I dream that Los Angeles will continue to be a sunny place, albeit with occasional ecological, sociological and theological disturbances. A truly sacramental place demanding both contemplation and action.”

People | Urban mystic at the crossroads

When I met Mother Teresa