US Catholic colleges adapt to online format during coronavirus 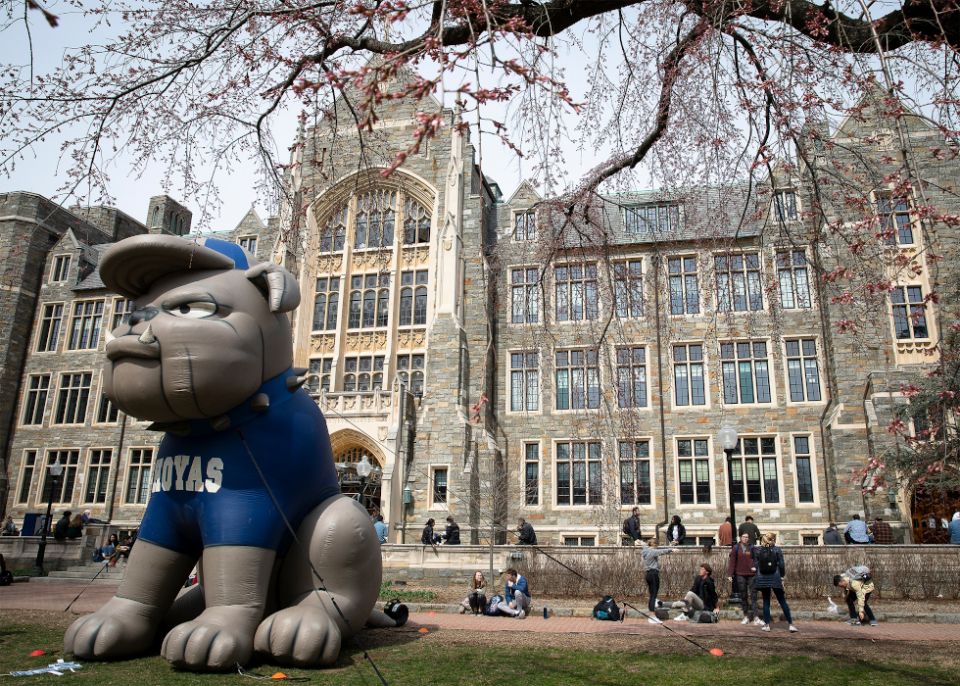 Students are seen on the campus of Georgetown University in Washington March 20, 2019. The university, along with a growing list of Catholic colleges, are cancelling public classes to stop coronavirus spread. (CNS/Tyler Orsburn)

But by the second week of March, a desire to curb the spread of the virus in this country prompted more than 100 higher education leaders to temporarily cancel in-person classes and move to an online teaching program for a few weeks or an unspecified time period.

These announcements, for most schools, came right before the start of spring breaks.

Catholic colleges and universities have been no exception to this transition happening at Harvard, Princeton and state universities across the country. As of March 11, dozens of Catholic college and university leaders had announced plans to cancel public classes and offer online education amid concern over the coronavirus' spread. This list is likely to continue growing in upcoming days.

For students and teachers alike, the announcement of this shift came without much advance notice. Kevin Ahern, an associate professor of religious studies at Manhattan College in Riverdale, New York — which will be online March 11 until the week of March 23, with a week off for spring break — called the format an adjustment, to say the least.

He and fellow professors didn't have much time to prepare. Teachers got word over the weekend that this might happen and then found out March 9 it was happening in two days.

That means faculty members have to get up to speed with technology and figure out a way to engage with students on an online platform that is not nearly the same as being together especially in a small classroom on his campus.

Fordham University sophomore Lindsey Fritz learned March 9 that her school in New York was suspending public classes and offering them online March 11 — with no date on when regular classes would resume. She said it has been a crazy time but that everyone she knows has been "super flexible."

Fritz, a freshman resident assistant, has been busy helping students pack up to go home or to figure out what they are doing if home is far away, and even making the offer that students can stay at her family's home in Cromwell, Connecticut, if they have nowhere to go.

She already was disappointed to find out that the university's global outreach program to El Salvador she planned to join over spring break was canceled, but this abrupt change in the entire school program is new to her and everyone else and as she put it, "there is nothing to compare it to."

Fritz, a communications major, who had her first online classes March 11, said it was in a video chat format where students could raise their hands and ask questions. She liked it and said that for another class later in the week, she would be participating while on the road — she's not driving — with some friends heading to Georgia.

The first Catholic university to announce it was moving to temporary online format was Seattle University, a Jesuit-run school, which announced March 6 it would not offer public classes for the rest of its winter quarter, ending March 20.

Although the university was switching to online classes, it planned to keep the campus open. Some Catholic universities with similar online plans, like Fordham, urged students not to stay on campus.

By March 11, other Catholic colleges and universities that announced they were canceling in-person classes temporarily included St. John's University in the New York borough of Queens, Sacred Heart University in Fairfield, Connecticut, and Santa Clara University in California.

News reports claimed University of Dayton students were protesting the school's temporary housing closures after a group of students had been dispersed by police March 10, but the university issued a statement the next day that said the students were not reacting to the school's coronavirus measures but "wanted one last large gathering before spring break, and the size and behavior of the crowd required police to take action."

None of the schools stopping their public classes had specific cases of coronavirus on their campuses, instead they said they were taking this step as a precautionary measure.

On March 5, the U.S. Department of Education released guidelines for colleges to quickly transition to online class formats.

But even with guidelines, this is a new experience for many students and professors, even if they have joined or presented online courses before.

"I'm actually excited," Fritz, the Fordham student, told Catholic News Service. She and her friends, despite the unknown territory they were going through, were taking it in stride, but she did point out that a friend of hers in IT has been super busy the past few days helping teachers.

"There's no other option; you've got to have a positive attitude," she said.

But Ahern, who teaches world religions and a labor studies class, has heard another side: students who are anxious about this new classroom switch, especially if they had work-study jobs on campus or other work near school and they need this money to pay tuition.

Graduating seniors also are concerned about the job market, he said.

"It's a new territory for a lot of us," he added, stressing that students and faculty alike need to be flexible.

He also thinks there is a teaching moment in all of this, particularly about how the church responds to those in need or to questions the pandemic raises about fair labor practices.

"If anything, this is teaching us we are not in control," he said.

People | US Catholic colleges adapt to online format during coronavirus