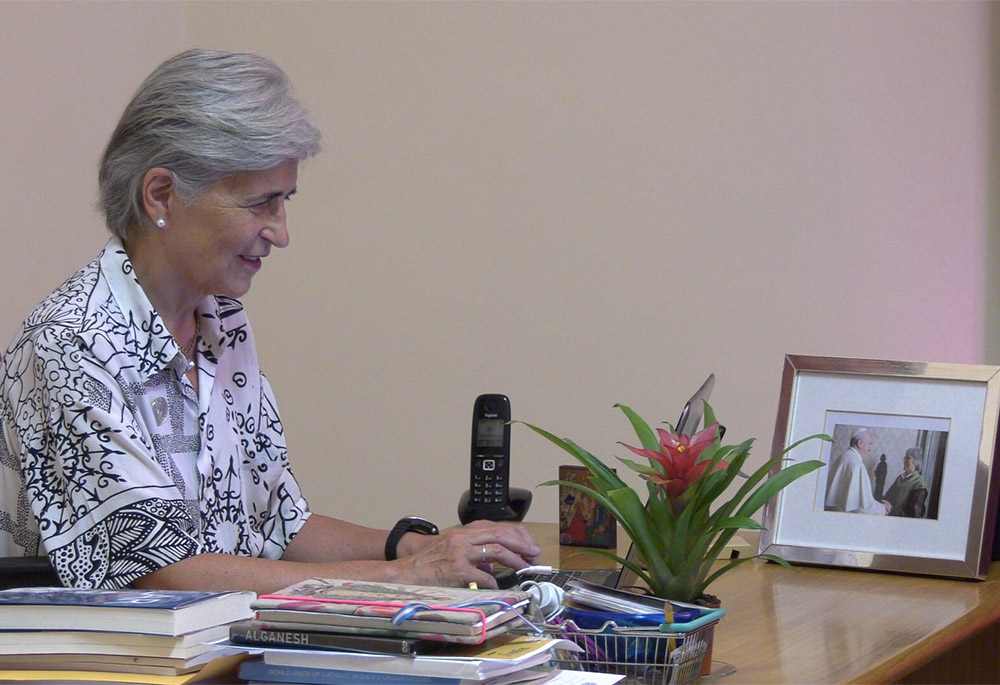 María Lía Zervino in her sparsely decorated office at the World Union of Catholic Women's Organizations in Rome. "We moved in right in the middle of the pandemic," she told NCR. (Justin McLellan)

When María Lía Zervino learned she was among the first three women appointed as members of the Vatican's Dicastery for Bishops, only two words came to mind: "What appointment?"

Called up by a journalist to get her reaction to the news, the Argentine was left in shock, and called Cardinal Marc Ouellet, the dicastery's leader, to confirm what she had heard was actually true.

The cardinal congratulated Zervino, who said her heart "began to pound really hard" before she went to a nearby chapel to process the information.

In her strikingly plain office about a half-hour's walk from St. Peter's Square, Zervino sat down with NCR July 19 to discuss the significance of her appointment and assess the state of women in the global church today.

The Dicastery of Bishops is one of 16 departments responsible for helping the pope in governing the universal church. As the Vatican body that receives input from local churches to recommend to the pope priests across the world who might serve as bishops, the dicastery falls within "a particularly important sector in the governance of the church," said Zervino.

Her appointment to the body is "not about winning some spaces of power for women," she told NCR. "We can give the special skills of women in this service, integrated with the other members of the dicastery. That's why we will benefit the whole church, not only women."

Zervino, nominated alongside Salesian Sr. Yvonne Reungoat and Franciscan Sr. Raffaella Petrini, is also the first laywoman to serve as a member of the dicastery. While Zervino maintains that "sociologically" she is a layperson, she notes that she belongs to an Argentine order of consecrated virgins, Servidoras.

She also lives out her service to the church as president of the World Union of Catholic Women's Organizations (WUCWO), which works with some 100 Catholic organizations in over 50 countries, all represented by women. In total, the union gathers 8-10 million Catholic women from all continents.

With her bird's-eye view on the state of Catholic women worldwide, Zervino says that it is up to dioceses and parishes to follow the pope's example and give women more substantial positions of responsibility in their local church communities.

When asked if one such way could be through reopening the diaconate to women, Zervino referenced her duties as a catechist in rural Argentina, where the only priest in the region was covering three parishes, each about 100 miles apart. 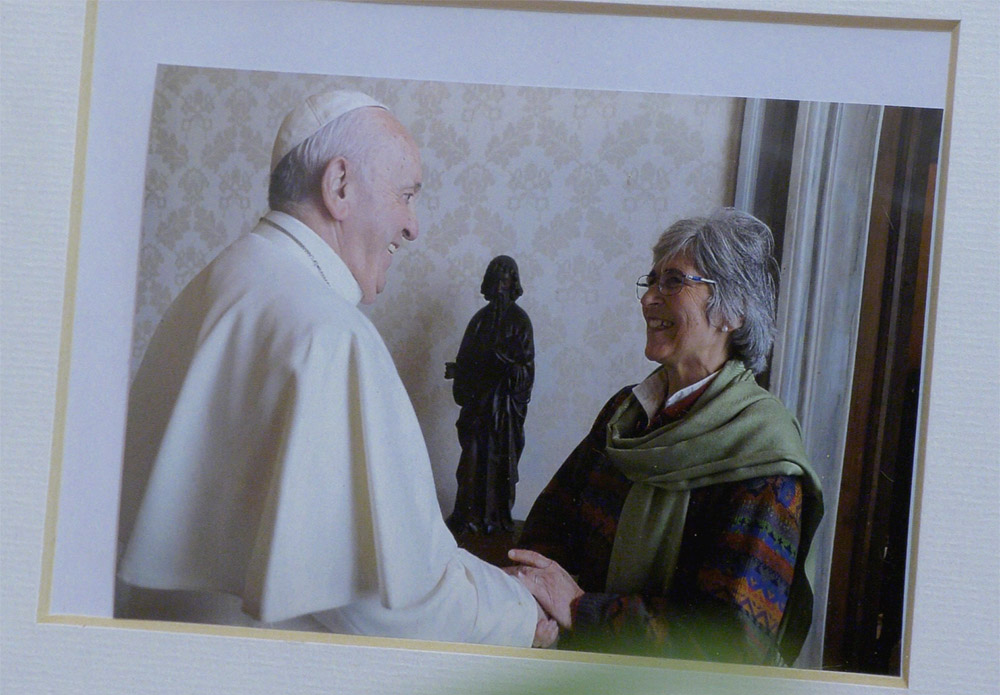 Prominently placed on María Lía Zervino's desk is a picture of her meeting with Pope Francis in January 2020. (Justin McLellan)

"I was asked not only to be a catechist, but also to do liturgy training, to be a eucharistic minister, to make some comments on the day's readings, and in an urgent case, a baptism," she recounted. "In my experience a woman can do it perfectly well. I was very happy those years."

The second Commission for the Study of the Women's Diaconate established by Pope Francis is now more than two years into its work. Ultimately, Zervino said, "the pope is the one who will decide on this."

She also suggested appointing women to serve in ministries needed in local churches. "A minister of listening, minister of health care, a pastor of ecological action — there are a lot of ministries in which women are as able as men, and sometimes could be better, and laywomen are to serve in all those cases around the world."

Despite the great progress in advancing women to senior positions within the institutional church in recent years, Zervino said a "greater female presence in the Vatican is not enough to change the church."

What she proposes is a "synergy of holiness," a culture of "empowering each other: bishops, priests, laity, consecrated persons, men, women. Then there will be a change, then we will have the skills of a synodal church."

Zervino told NCR that a "wonderful" step in that direction is the Vatican's new apostolic constitution, Praedicate Evangelium, which among its changes to the governance of the Roman Curia allows for any Catholic — lay or ordained, male or female — to lead any of the Vatican's 16 departments, known as dicasteries.

"The bishops could also do something like that in their own dioceses. It's an open door for all of us, for the whole church, not only for women," Zervino said.

"Pope Francis is asking us for a church with a female profile," she continued. "He always says the church is female."

A version of this story appeared in the Aug 5-18, 2022 print issue under the headline: New Vatican dicastery member says appointment benefits women.