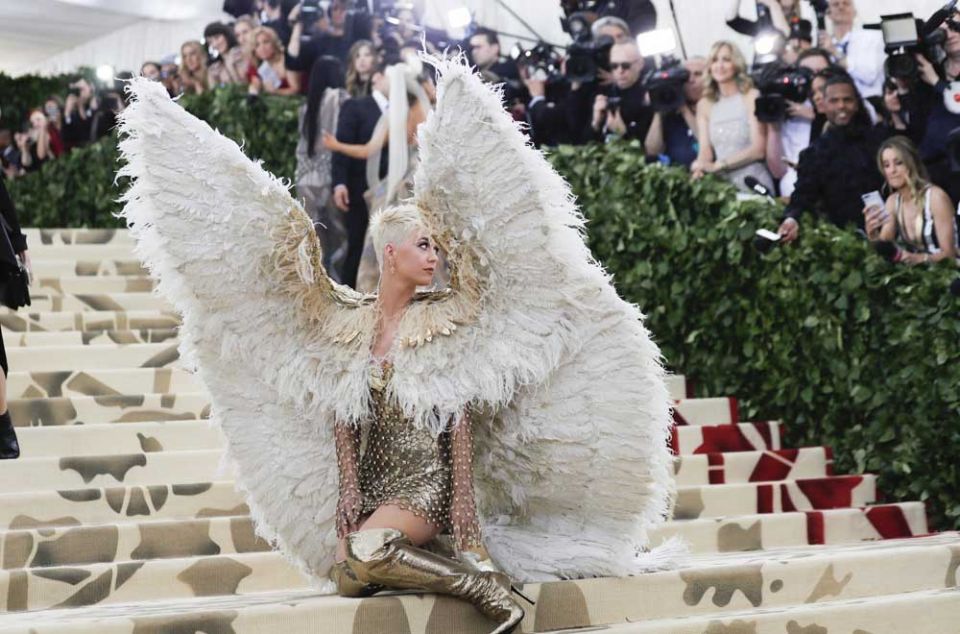 Singer Katy Perry arrives at the Metropolitan Museum of Art in New York May 7 for the exhibit "Heavenly Bodies: Fashion and the Catholic Imagination." (CNS/Reuters/Carlo Allegri)

Given the Met Gala's theme this year, the mingled excitement and dread its advent provoked in certain corners of the internet was perhaps inevitable. "Heavenly Bodies: Fashion and the Catholic Imagination" as the guiding dress code for Anna Wintour's annual handpicked sampling of the rich and famous at first seems like an ill-judged marriage. In such an uneasy truce between sacred and profane, the sacred seems doomed to come out the loser.

There were genuinely sacrilegious costumes. The seven swords protruding from Lana del Rey's dress were both overt references to Our Lady of Sorrows, and an offensive bit of brand consistency for pop music's resident Beautiful Sad Girl. But for the most part, high fashion and high church came together eerily well. Partially that's because, as Vox notes, Catholicism has long had an aesthetic of sensuality and extremism. But partially it's because, in the wake of both #MeToo and the never-ending clerical abuse scandal, it's hard not to see certain similarities between the two parties.

The nation's tastemakers have seen predatory behavior by their movers and shakers come to light after decades of silence and deliberate complicity. And more than one, more than a few, bishops enjoyed the pomp and the pageantry of the office, the gorgeous trappings of authority, while preying on those entrusted to their care in the most cynical and monstrous ways imaginable. A knife's edge, it seems, separates beauty from corruption.

Corrupt beauty has its charms, but the Met Gala's looks didn't even rise to that level of problematic appeal. For the most part, they were uninspired: the expected vague medievalism and Italian-widow sensibility, baroque flourishes here and there. And that's the people who were trying. Kim Kardashian, who could pull off an Empress Theodora look if anyone could, wore an unremarkable form-fitting gold lamé gown in a reference to … a chalice? Unspecified gilt-work? It's unclear. 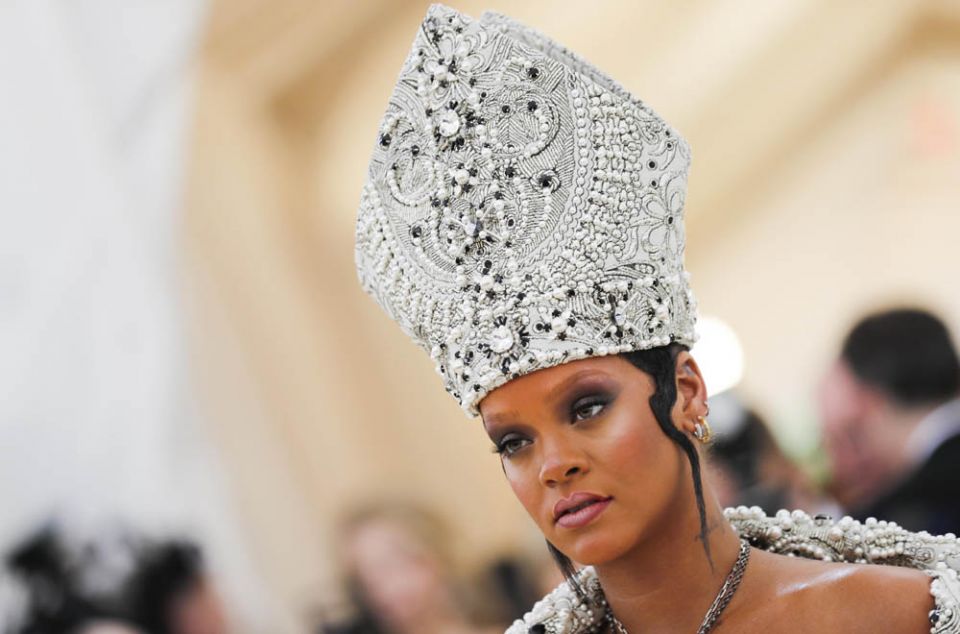 Singer Rihanna arrives at the Metropolitan Museum of Art in New York May 7 for the exhibit "Heavenly Bodies: Fashion and the Catholic Imagination." (CNS/Reuters/Carlo Allegri)

There were bright spots. Rihanna was obviously always going to fashion herself as a new Pope Joan, but her papal miter was no less of a gonzo, over-the-top power move for being foreseeable. Zendaya's homage to La Pucelle was magnificent. Janelle Monáe's outfit seemed the result of actual meditation on the intersection of secular and profane couture, rather than a mere reference. And Greta Gerwig's gorgeous, simultaneously austere and voluminous gown stole the show. It transcended the parodic register of the gala; this was formalwear clearly inspired by the Daughters of Charity, but which needed no genealogy to delight and amaze.

But for the most part, Olivia Munn's dress was a representative example. A gold mesh affair supposedly inspired by Munn's "love for the Crusades," it left little to the imagination, except how a dress literally made of chain mail could be so dull.

Everything that the Met Gala aspired to has been done already, and better, by Frederico Fellini.* His 1972 film "Roma" features an absurdist clerical fashion show that captured all the nonsense, the claustrophobia, the morbid splendor, the Mafioso self-sufficiency, the extravagant glory of the Vatican. In comparison, the Met Gala failed on every front. Its participants lacked the moral center to critique the church, the erudition to understand it, and the taste to emulate it.

This failure seems related to a larger failure, one that involves the entire industry. If you follow the Met Gala and its world of haute couture, you may over time notice something very odd: rarely does anyone seem interested in clothes. Clothes as reference and cultural riff, yes; clothes as transgression and decadence; even clothes as high concept sculpture. But clothes as clothes, as human craft designed to shelter, cover, and glorify the human body across various contexts: this rarely gets serious attention. The result is a stultifying repetition. The Met Gala theme changes from year to year, but its influence is limited to a campy nod, an accessory to the same basic silhouettes, the same would-be edgy provocations.

The same disinterest in dressing actual human women exists at the lower end of the fashion hierarchy. The protests against the inescapable, impractical, and obnoxious embellishment on the shirts of 2017 had barely been written when fast fashion foisted a new horror on us. This time, it was ankle-cropped, wide-legged pants: a look that does not even flatter the sylph-like models in advertisements, but which every major brand seems to carry.

If the fashion industry cannot effectively critique the church, perhaps the church can save fashion from itself. After all, it was St. Francis de Sales who said, "For my own part I should like my devout man or woman to be the best dressed person in the company, but the least fine or splendid," which remains one of the best everyday standards to shoot for.

Unfortunately, it seems unlikely. In recent years, the most visible Christian critique of fashion has been a tepid modesty-blogger cottage industry. The modesty movement for the most part accepts the current mode of production as a given. Its main contributions are demeaning advice for young women on how to prevent men from lusting after them, and free advertisement for J. Crew and Anthropologie.

What is needed is a root-and-branch examination of the entire fashion industry. The abuses of women and children in sweatshops; the ecological destruction caused by fashion's inherent planned obsolescence; the visible stratification of class by clothing; the destabilizing effect on culture when the norms around dress change every few years; the identity-as-consumption relentlessly marketed to women; the humiliating, demoralizing lack of functional, flattering clothing that many people experience: all these evils are connected. None can be remedied without addressing the others.

We need a serious inquiry into how we should dress ourselves: not merely what we as individuals should consume, but how the entire chain of design and production should be structured. Clothing is often written off as women's frivolity, but it demands and deserves attention as serious as that afforded our food, our buildings, and other pillars of our civilization. Fashion lies at the heart of what Francis called our "throwaway culture." If the best our most celebrated designers can manage is the exhausted extravagance on display at the Met Gala, we cannot be far from that culture collapsing under its own leaden weight.

* This article has been updated to correct the name of Frederico Fellini.

A version of this story appeared in the June 15-28, 2018 print issue under the headline: Fashion industry needs complete remodel .