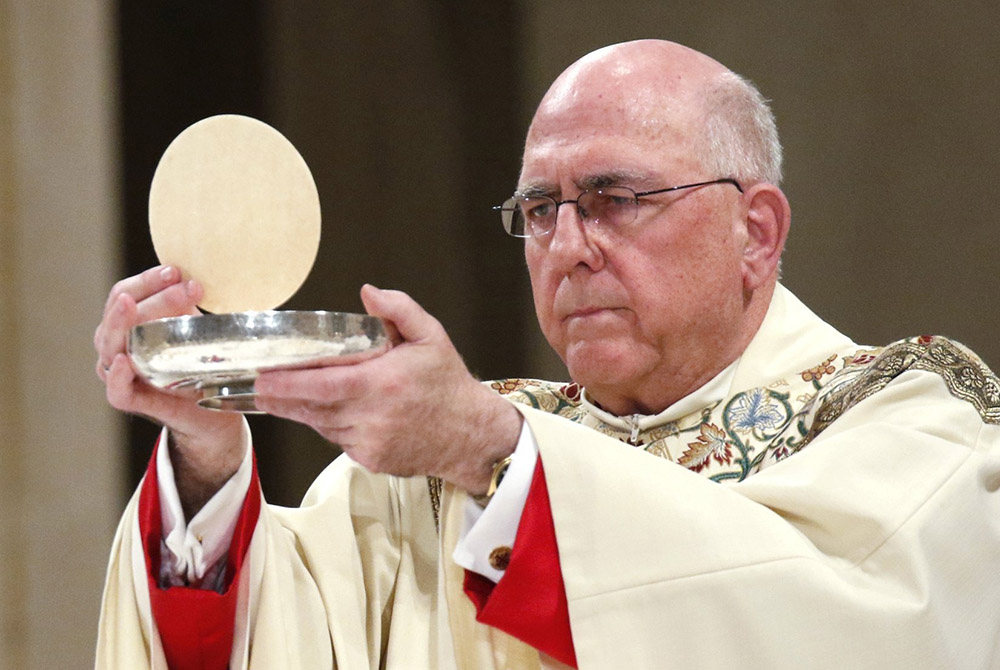 Archbishop Joseph Naumann of Kansas City, Kansas, chairman of the U.S. bishops' Committee on Pro-Life Activities, celebrates Mass Jan. 17, 2019, at the Basilica of the National Shrine of the Immaculate Conception in Washington. (CNS/Gregory A. Shemitz)

More than 20,000 individuals have signed a petition calling for Archbishop Joseph Naumann of Kansas City, Kansas, to be removed from his post as chairman of the U.S. bishops' pro-life committee following a series of comments signaling hostility towards President Joe Biden over his position on abortion.

The open letter, according to its authors, "highlights how the archbishop's culture-war attacks on the president's faith contrasts with the approach of Pope Francis, who has expressed his desire to find common ground with the administration."

The letter was published on March 18 by the advocacy groups Faith in Public Life and Faithful America. Signatories call for Naumann to be replaced by a bishop who will give attention to a range of pro-life concerns, stating that "Pope Francis reminds us that 'the lives of the poor' and 'those already born' are 'equally sacred.' " Among its signers are 400 priests and men and women religious.

"In questioning President Biden's faith and even claiming he should not receive Communion, Archbishop Naumann is choosing the culture wars over pastoral leadership," the letter states, referring to an interview where Naumann said Biden "should stop defining himself as a devout Catholic."

"Claiming that President Biden isn't a real Catholic and commending a priest who politicized the Eucharist during the election is a form of pastoral malpractice that does nothing to change hearts and minds," said John Gehring, Catholic program director at Faith in Public Life, in a statement. "Archbishop Naumann consistently demonstrates he is more interested in being a culture warrior than a pastor."

But some Catholics have criticized the Faith in Public Life letter. Stephen White of the Catholic Project at the Catholic University of America, argued in a tweet that the letter reveals some Catholics are "less bothered by Biden's support for abortion than by the Catholic bishops who point it out."

Naumann has been among Biden's most vociferous critics on abortion, using his homily as pro-life chairman ahead of the annual March for Life in January to directly challenge the president.

"Sadly, President Biden is the perfect example of the religiously and ethically incoherent straddle: claiming to believe that human life begins at conception and personally opposing abortion, while doing everything within his power to promote and institutionalize abortion not only in the USA but also around the world," he said.

In a series of interviews in recent weeks, he has built upon that argument to call on the president, a regular Massgoer, to stop receiving Communion.

"The president doesn't believe what we believe about the sacredness of human life, or he wouldn't be taking the actions that he is. And yet, he continues to receive the Eucharist," he told The Atlantic earlier this month. "We can't judge his heart. But we consider the action itself a grave moral evil."

The election of Biden, the nation's second Catholic president, has produced a public rupture among the U.S. hierarchy.

In November, U.S. bishops' President Archbishop José Gomez of Los Angeles announced the formation of a working group to address the question of Biden's Catholicism and areas in which his political stances differed with official church teaching, specifically on the issues of abortion and LGBTQ rights. Gomez then released an Inauguration Day statement warning that "our new President has pledged to pursue certain policies that would advance moral evils."

The official Inauguration Day statement from the bishops' conference stood in stark contrast to one issued by Pope Francis, who had previously called Biden and said that he looks forward to working with the new administration. While the U.S. bishops' working group on Biden has since been disbanded, the bishops' committee on doctrine is preparing a statement on "eucharistic coherence," which will later be presented to the full body of bishops for consideration.

Biden's local bishop, Cardinal Wilton Gregory of Washington, has already made clear he does not intend to deny the president Communion. Similarly, Bishop Francis Malooly of Wilmington, Delaware, has previously stated, "I do not intend to get drawn into partisan politics nor do I intend to politicize the Eucharist as a way of communicating Catholic Church teaching."

Both Popes John Paul II and Benedict XVI personally administered Communion and presided over public Masses in which pro-choice politicians received the sacrament.