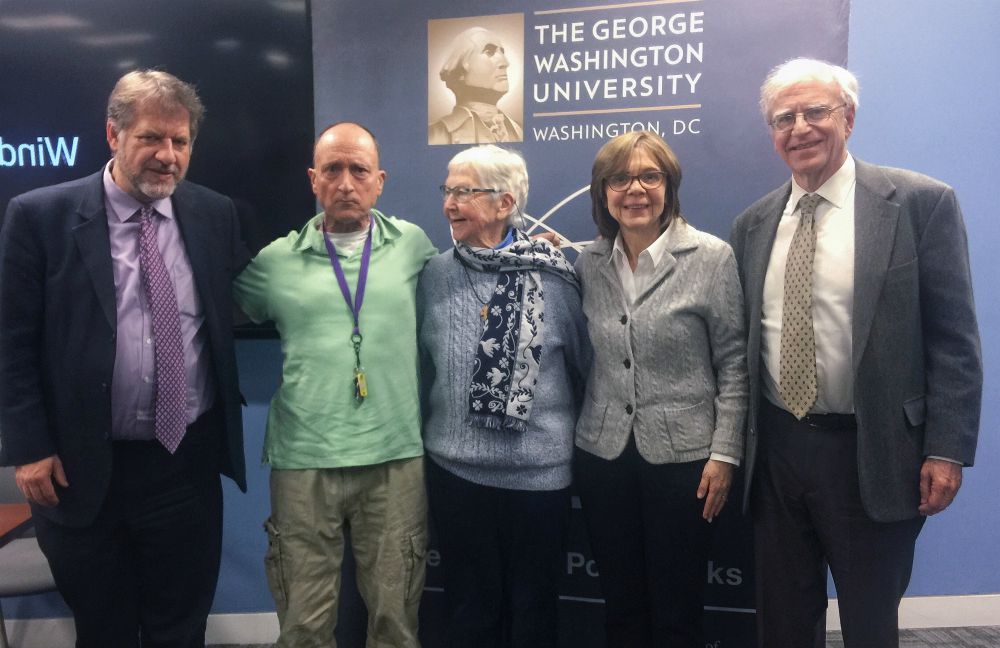 Emmy award-winning producer Helen Young presented the film "The Nuns, The Priests, and The Bombs" on Dec. 14 at George Washington University in Washington, D.C. The university's Elliott School of International Affairs and Institute for International Science and Technology Policy co-hosted the event.

Young, a former longtime staff writer and producer for CBS and NBC, was joined by her associate producer and editor, Roger Schulte, and two of the film's subjects, Sr. Megan Rice, a member of the Society of the Holy Child Jesus, and Michael Walli, a member of the Dorothy Day Catholic Worker. Rice and Walli, along with Greg Boertje-Obed, committed what's reported to be the most significant breach in U.S. nuclear security history, leading to their imprisonment and later release.

The documentary focuses on the trio's participation in Plowshares, a direct-action movement drawing its name from Isaiah 2:4. Their legacy is that of the priests and brothers, Jesuit Fr. Daniel Berrigan and his brother Philip Berrigan, a former Josephite priest, both of whom participated in the first action, which became known as Plowshares Eight, in 1980.

The film opens in 2012, when Rice, Walli and Boertje-Obed broke into the Department of Energy's Y-12 National Security Complex known informally as the "Fort Knox of uranium." Young then considers five earlier Plowshares activists who entered Naval Base Kitsap-Bangor, near Seattle, and whose trial deeply inspired Rice. Unforgettable characters include the late Jesuit Fr. Bill "Bix" Bichsel, who worked with the poor of Tacoma, Washington, Susan Crane, a retired schoolteacher in the Catholic Worker movement, Jesuit Fr. Steve Kelly, who has served multiple prison sentences including solitary confinement, and the late Lynne Greenwald, who was radicalized after meeting Hiroshima survivors. But the most direct influence on Rice was the late Sacred Heart Sr. Anne Montgomery, daughter of a World War II vice admiral in the Pacific command. She respected the military culture she grew up in, but she also worked tirelessly for peace and believed nuclear arms are untenable.

Trailer for "The Nuns, The Priests, and The Bombs"

After the film, Young and Rice joined a panel with Jonathan Weisgall, vice president of government relations at Berkshire Hathaway Energy, who had successfully represented the people of Bikini Atoll in lawsuits against the U.S. government. The moderator was Hugh Gusterson, professor of international affairs and anthropology at George Washington University, an expert in nuclear weapons and nuclear culture.

Gusterson opened by asking, "Under what conditions do you go against the democratically elected government and say that right is on your side?"

Young noted that she was simply documenting activists, and it is they who believe the law itself is illegal. Skepticism of existing legislation isn't just limited to radicals, however. Young cited an op-ed by George P. Shultz, William J. Perry, Henry A. Kissinger and Sam Nunn in The Wall Street Journal, and although they would not likely agree with Plowshares activists, they argued that reliance on the peacekeeping power of mutual assured destruction is becoming increasingly unrealistic, even though many lawmakers still depend on it.

"Father Bix was asked many times, 'Why do you vigil, protest and go to jail, and do all these things?' And Bix said, 'Because the weapons are there. They're right in our backyard. And everybody walks around in the area, oblivious to this, almost like this is okay.' He recalled people saying, 'Well, the issue is on the back burner.' And he would reply, 'It's not on the back burner. It's not even on the stove. We're not even talking about it,' " Young said. 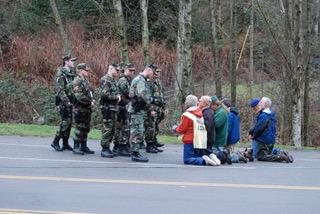 Scene from "The Nuns, The Priests, and The Bombs" (Leonard Eiger)

Weisgall offered some thoughts on the nature of civil disobedience, on the intersection of law and morality, and on being willing to pay the price for knowingly breaking the law.

Rice clarified that the Plowshares activists frame their actions as civil obedience, not disobedience. "A law is made to preserve the common good. It is not a law if it harms the common good," she said. In this and many other exchanges, such as about the feasibility of unilateral disarmament, Rice parted with the positions of some on the panel. She believes complete disarmament is practical and necessary, whereas others are not sure it is possible.

Among the many questions asked of the panel, Debra Decker, senior advisor at the Stimson Center, a Washington-based international security think tank, recalled a conversation with a representative of the U.N. Office of Disarmament Affairs, Nikita Smidovich, with whom she developed an international student essay competition. He hoped that someday "proliferation of weapons of mass destruction [w]ould be like cannibalism. You just don't do it!"

She then asked about an economic and employment issue raised in the documentary, the complaint that Plowshares actions cause job loss when contractors are fired after break-ins. Young replied that to her knowledge only one person lost a job due to any of the Plowshares actions featured in her documentary.

Douglas Shaw, assistant professor of international affairs at George Washington University, asked Rice about how direct action could be linked to practical steps out of structural deterrence.*

"We all share equally in the responsibility for transforming nuclear weapons into life-enhancing alternatives," Rice said. "I happen to have no grandchildren, no children. I have a vow of poverty so I have no excuse not to do what I know ought to be done." She then asked Walli to state for the audience what he had spray-painted on the wall at Y-12: "The Fruit of Justice is Peace."

In conclusion, Gusterson asked what Rice had learned about America while in prison. She recalled living in one overcrowded dormitory of up to 120 women. Rice found their resilience inspirational and today advocates for prison sentencing reform.

The presentation followed a previous screening on Nov. 30 at the Carnegie Institute in Washington, D.C., and sponsored by the Center for Study of Responsive Law and Essential Information, two non-profit organizations founded by Ralph Nader. It was attended by more than 250 people, some of whom who were profiled in the film. There was also an earlier private showing on June 29 at the United Nations.

* An earlier version of this article identified Douglas Shaw as senior associate provost for international strategy at George Washington University.

[Carole Sargent is director of scholarly publications at Georgetown University and lives in an intentional community with two Religious of the Sacred Heart and several other lay women. She is writing a book about Catholic sisters and nuclear disarmament.]