Can Clinton-Kaine bring Catholic voters back to the Democrats? 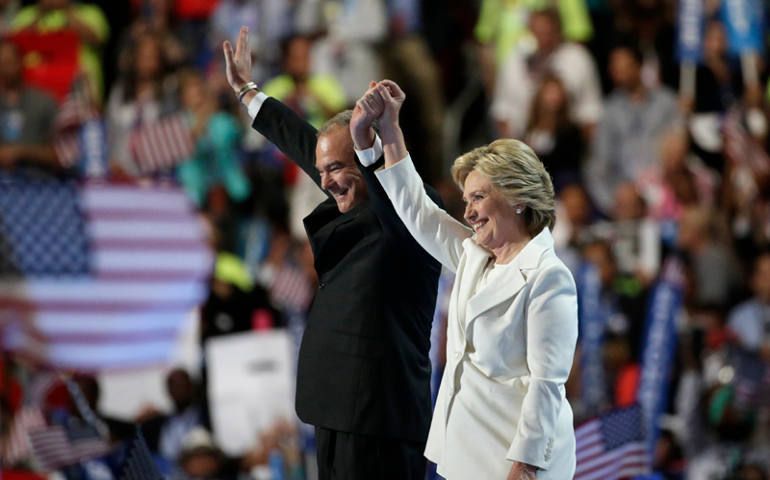 Philadelphia — If there is one constant in this unconventional presidential campaign it is the unpredictability -- and importance -- of the Catholic vote.

Once a reliably Democratic cohort, Catholics have in recent decades swung back and forth between the two parties. And because they represent more than a fifth of all voters, and are concentrated in key Midwestern swing states, the candidate with the most Catholic support has wound up winning the popular vote.

Catholics are also a diverse and constantly changing community thanks to immigration, largely from Latin America, and the exodus of cradle Catholics to other denominations or to the ranks of the unaffiliated.

That only adds to the difficulty of figuring out what Catholic voters are likely to do from one quadrennial election to the next.

"I always like to say there is no Catholic vote -- and it's important," said E.J. Dionne, a liberal Catholic and Washington Post columnist who was watching the Democratic National Convention unfold this week on the floor of the Wells Fargo Arena in South Philadelphia.

As expected, white evangelicals are going solidly for Donald Trump and down-ballot Republicans, while Jews, African-American Christians and members of minority faiths, as usual, are going strongly for Hillary Clinton and the Democrats.

Since the 1970s, Dionne noted, each party is guaranteed about 40 percent of the Catholic vote. But it's that middle 20 percent that is in play, and in a close election winning that bloc is crucial to each candidate's chances in November.

That's a key reason why Clinton -- who officially accepted her party's nomination Thursday night, the first female presidential candidate for a major political party in U.S. history -- picked the Catholic, Jesuit-educated U.S. Sen. Tim Kaine of Virginia as her running mate. And why Barack Obama picked Joe Biden as his running mate in 2008, and why Mitt Romney picked Paul Ryan as his wingman in 2012 -- both Catholics. There has still been only one Catholic president in U.S. history -- John F. Kennedy, a Democrat -- and only two other Catholic presidential nominees, both Democrats: Al Smith in 1928 and John Kerry in 2004.

But it now seems almost a requirement to put a second-in-command who can tick the Catholic box. Even Trump's running mate Indiana Gov. Mike Pence, likes to call himself an "evangelical Catholic" even though he left the Catholicism of his birth to embrace Protestant evangelicalism while in college.

Kaine delivered a powerful, faith-inflected speech on Wednesday in which he spoke repeatedly about the centrality of his Catholic faith to his life and mission, and about his Jesuit education to be "a man for others" as the "North Star for orienting my life."

Such talk comes naturally to Kaine, and his sincerity and affable religiosity could well appeal to the many voters who are turned off by Trump's bumptious antics and harsh rhetoric -- not to mention his penchant for picking fights with Pope Francis, a popular figure who is also the first pontiff from the Jesuit religious order that had such an impact on Kaine.

"It's not just the fact that he (Kaine) is Catholic," said John Podesta, a veteran Democratic operative and chairman of Clinton's 2016 presidential campaign. "It's the fact of what's at his core, what motivates him in public life."

"It's really that core, that spiritual center that says, ‘I can make a difference in people's lives if I apply myself in public life,'" Podesta said after a Mass Thursday held for convention delegates and activists at a historic downtown church.

Kaine's reputation for integrity, as well as his relatively centrist political record and knack for coalition building, make him the anti-Trump in many respects.

That could play especially well with Catholics, in particular undecided Catholics, who seem to be disproportionately represented among anti-Trump Americans: a recent Pew Research Center survey showed that Clinton leads Trump by a huge 19-point margin among weekly Mass-goers. By contrast, Romney led Obama by 3 points among that same group at the same point in 2012 -- a 22-point shift for the Democrats.

Of course, how much any running mate actually boosts a presidential candidate's prospects is matter of some debate. The conventional wisdom tends to agree with Richard Nixon's adage that "the Vice President can't help you … he can only hurt you."

Kaine could put that standard to the test because he says he is personally opposed to abortion, but as a public official supports abortion rights and has a perfect rating from most abortion rights lobbies.

That stance has drawn sharp opposition to Kaine from anti-abortion Catholics and their allies.

"Sen. Kaine is good at hiding behind his Catholic background -- but no one should be fooled," Carol Tobias, president of National Right to Life, said when Clinton picked Kaine. "His record, and his openly declared legislative goals, are as pro-abortion as they come."

Yet in spite of the media focus on that flashpoint issue, and the passions that inflame both camps, surveys show that voters generally don't rank abortion very high on their list of electoral priorities.

And as Dionne said: "I think the Catholics who only vote on abortion have been voting Republican for a long time." They were never likely to be wooed by anything Clinton did, and it's a fair bet that Trump's negatives would outweigh the reservations that undecided voters might have in regard to abortion.

Party leaders and activists here also seemed to believe that Kaine's working class roots and his focus on pocketbook issues like jobs, economic inequality and affordable health insurance would matter far more to voters than debates over abortion rights and abortion reduction policies.

Moreover, the issue that is far and away most important to a key Catholic constituency -- Hispanics -- is immigration.

On that score Kaine, with his long support for immigration reform and his fluency in Spanish, which he learned during a year as a missionary in Honduras as a young man, easily beats Trump and provides a real opportunity for the Democratic vice-presidential candidate to score points for Clinton.

The Pew survey, conducted in mid-June, found that 77 percent of registered Hispanic Catholic voters said would support Clinton or were leaning toward supporting her, with just 16 percent backing Trump. The figures for registered white Catholics were a sharp contrast: 50 percent siding with Trump and 46 percent with Clinton.

The numbers so far, and the fact that Trump's candidacy has scrambled so many of the traditional coalitions and agendas, has Democrats here feeling good about where they stand with the Catholic vote.

"I think the beauty of our faith is that it helps us formulate our ideas and our opinions and helps us think through the issues based on that faith," said Kevin Washo, executive director of the convention's host committee and a lifelong Philadelphia Catholic.

"And as we come down to the wire I think our party is in a good position to reach out to a lot of those folks."

Editor's note: This story has been updated to include the 1928 presidential nomination of four-time New York Gov. Al Smith.

Politics | Can Clinton-Kaine bring Catholic voters back to the Democrats?