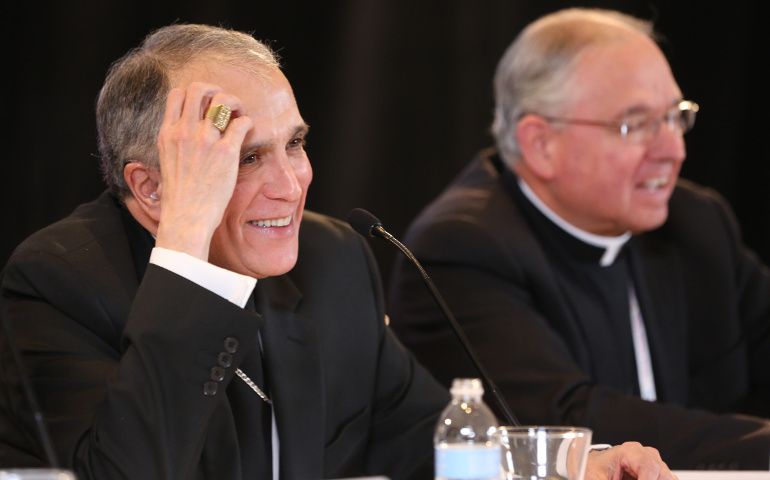 Cardinal Daniel DiNardo of Galveston-Houston addresses a news conference Nov. 15 at the fall general assembly of the U.S. Conference of Catholic Bishops in Baltimore. The cardinal was elected USCCB president that morning. Seated to his left is Archbishop Jose Gomez of Los Angeles, who was elected USCCB vice president. (CNS / Bob Roller)

Washington — Stronger collaboration among leading Catholic organizations is ahead as they address long-standing human needs and strive to ensure that the work of the church prospers.

From leadership changes to the adoption of new strategic plans and priorities in 2016, agencies such as Catholic Relief Services, Catholic Charities USA and the U.S. Conference of Catholic Bishops are expecting to strengthen their core services on the path to deepening the understanding of what it means to be Catholic.

Sean Callahan was to begin serving as president and CEO of Catholic Relief Services Jan. 1. The agency's No. 2 since 2012, Callahan has extensive field experience and previously oversaw the agency's overseas operation.

He told Catholic News Service via email as he was traveling to Lebanon Dec. 7 that CRS is focusing on its Catholic identity as called for in the agency's current strategic plan that ends in 2017. Specific areas CRS is addressing include becoming a leader in emergency response; agricultural livelihoods and health; deepening expertise in collaboration and support of overseas partners; integrating justice and peacebuilding activities in its program; collaborating with the global church; and mobilizing resources around the world.

It's a long list for the U.S. bishops' overseas relief and development agency, but one which Callahan has helped fashion during his 28 years with CRS.

"Advocacy and 'getting the word out' in conjunction with the USCCB and other Catholic agencies will also be a priority," he wrote. Callahan said he expects collaboration with other U.S. agencies, including the Catholic Health Association and the bishops' Migration and Refugee Services, to increase.

"As a church we need to unite to ensure that the role of the church, the diaconia, is flourishing, coordinating and advocating as one. It is good stewardship to be the 'one seamless garment' in which the church is clothed," he explained.

CRS also has a new chairman of the board in Maronite Bishop Gregory Mansour of the Eparchy of St. Maron in Brooklyn, New York. His ministry has been marked by leadership on humanitarian issues in the Middle East and he has been a strong human rights advocate for Christians fleeing violence and persecution.

During the USCCB fall general assembly, Mansour urged his fellow bishops to bring wider attention to the plight Middle East Christians to parishes and political leaders.

"People do look to America and religious freedom is our greatest freedom and we ought to be able to export it. ... The more we export it throughout the world, the happier our world will be," he said at the Baltimore assembly.

Callahan called Mansour an advocate for humanitarian action around the world and recalled his visits to CRS programs in Latin America, Asia and Africa.

With his expertise on the Middle East, Mansour will be able to raise the profile of the plight of Christians in the region and help strengthen ties with the USCCB on the issue with U.S. policymakers.

At the USCCB, the bishops elected a new president and vice president during their fall general assembly and welcomed a new general secretary early in the year.

Cardinal Daniel DiNardo of Galveston-Houston and Archbishop Jose Gomez of Los Angeles were elected president and vice president, respectively. Both come from areas with large Latino populations and have been vocal immigrant rights advocates. Gomez is the first Latino bishop to hold the vice president spot in the USCCB leadership.

The prelates' election comes as the U.S. Catholic church undergoes its own evolution with a growing number of Latino members, many of whom are fearful that President-elect Donald Trump will carry out a campaign promise to deport people who are in the country illegally.

Signifying the bishops' support for immigrants, both officials issued statements Dec. 1 on behalf of the USCCB calling for a day of prayer for migrants and immigrants Dec. 12, the feast of Our Lady of Guadalupe, patroness of the Americas. The day of prayer was intended to be a time to place before a merciful God the hopes, fears and needs of all those families who have come to the United States seeking a better life, the USCCB said.

"So many families are wondering how changes to immigration policy might impact them," Gomez said in his statement. "We want them to know the church is with them, offers prayers on their behalf, and is actively monitoring developments at the diocesan, state, and national levels to be an effective advocate on their behalf."

On the administrative side, Msgr. Brian Bransfield began his five-year term as USCCB general secretary early in 2016. Bransfield, a priest of the Philadelphia archdiocese, coordinates the conference's administrative matters. His term runs through until 2021.

Meanwhile, the bishops adopted a strategic plan that will guide the work of the USCCB through 2020. It reflects the efforts of Pope Francis to establish a more merciful and accompanying church, Archbishop Gregory Aymond of New Orleans, chairman of the bishop's Committee on Priorities and Plans, told the bishops' fall general assembly.

The plan incorporates the theme "Encountering the Mercy of Christ and Accompanying His People With Joy" in setting five priorities: evangelization, marriage and family life, human life and dignity, vocations, and religious freedom. More than a year in development, the plan stems in large part from Pope Francis' message to the bishops when he visited the U.S. in 2015.

The plan also is meant to support individuals and families in daily life and to encourage actions that carry out what has been described as "missionary discipleship."

Close collaboration among Catholic agencies will be key as Catholic Charities USA begins to address a new series of priorities through 2022 that were introduced during the organization's fall gathering in Boston.

"The housing crisis is probably the top issue facing people today," said Dominican Sr. Donna Markham, CCUSA president and CEO. By working to develop affordable housing across the country, but especially in high-cost West Coast and East Coast cities, Catholic Charities can help stabilize the lives of poor and low-income people so they are not moving from place to place over short periods of time.

The strategic priorities do not stop at housing. Catholic Charities USA also is looking at new ways to integrate health and nutrition, improve responses to immigrants and refugees, and develop local leadership rooted and strengthen Catholic identity among the laypeople who increasingly are taking on executive roles in Catholic institutions.