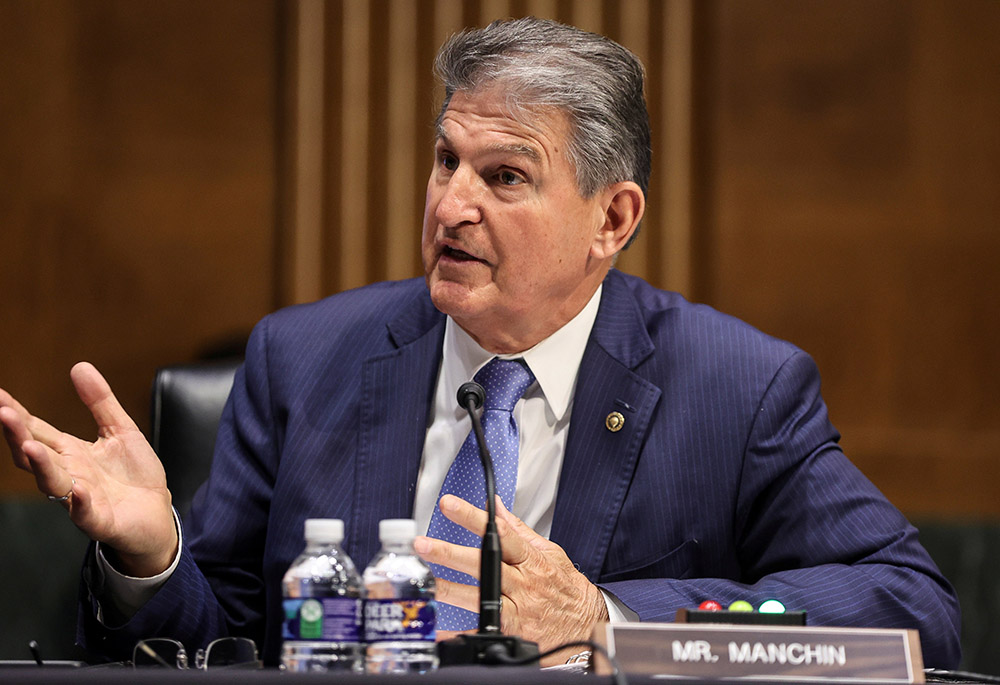 As Democrats struggle to revive talks over the stalled Build Back Better bill, Sen. Joe Manchin is facing pushback from a spectrum of religious groups frustrated by his position on the child tax credit — including conservative-leaning faith organizations whose concerns he has championed in the past.

Debate over the Build Back Better Act, a sweeping social programs proposal and a core part of President Joe Biden's domestic agenda, ground to a halt in December when Manchin declared he wouldn't vote for the bill.

According to The Washington Post, negotiations broke down after the West Virginia Democrat floated an alternative proposal to White House officials that maintained elements of the original legislation but omitted an expansion of the child tax credit, a popular provision that provides financial assistance to parents with children.

This week, Manchin told reporters he supports a child tax credit, which advocates say helps prevent child poverty — but only if it includes a work requirement for parents wishing to receive the benefit.

"I think there should be a work requirement," Manchin told Business Insider. "I've been very, very direct on that."

The plan would bar some of the poorest families from accessing the benefit, which was expanded last year under Biden's stimulus law to allow most families to receive monthly payments of up to $300 per child. But the expansion expired last month, and if Manchin's proposal for a work requirement — which he has suggested for months — were to become the new norm, families that do not pay federal income taxes due to lack of income would not receive the checks.

Manchin, a Catholic Democrat, is now at odds with religious groups such as the U.S. Conference of Catholic Bishops, a group whose positions he has promoted in the past: When the bishops' conference, National Association of Evangelicals, Orthodox Union and other faith groups raised concerns about a provision of the Build Back Better bill requiring faith-run prekindergarten and child care programs to comply with federal nondiscrimination statutes, the West Virginia senator reportedly advocated for a change.

But when asked about the child tax credit, bishops' conference spokesperson Chieko Noguchi pointed to a Sept. 7 letter from bishops voicing support for the benefit expansion. The authors argued, "It is especially important that the credit remain fully refundable to ensure the most economically vulnerable children benefit from this family support."

Noguchi said the conference is "concerned that work requirements would undermine this goal and put the credit out of reach for those neediest children and their families."

Manchin's proposal has also pitted him against the National Association of Evangelicals. While the group has not taken a position on the Build Back Better Act as a whole, Galen Carey, the group's vice president for government relations, has appeared at faith-themed events to express support for the bill's child tax credit provision.

Asked this week about tying work requirements to the child tax credit, Carey was quick to express disapproval.

"We support making the child tax credit fully available to the families who need the help the most," he said in a statement. "Work is critically important to human dignity but having a particular level of earned family income should not be a prerequisite to accessing support for their children. Full CTC refundability is what makes it such a powerful anti-poverty tool."

In a previous statement sent to Religion News Service in December, Carey noted the benefit has enjoyed bipartisan support in the past and "has been expanded by both Republicans and Democrats."

"Congress should act urgently to extend the Child Tax Credit, whether as part of a larger package or as a separate bill," the statement read.

Representatives for Manchin did not immediately respond to questions about the religious pushback, but faith groups have condemned Manchin's position for months. Chief among them: the Poor People's Campaign, a faith-led activist group that often advocates for liberal-leaning legislation. Poor People's Campaign leaders staged large protests decrying Manchin throughout 2021 for several reasons, including opposition to his stance on the child tax credit.

While discussing Manchin's suggestion of work requirements during a September news conference, the Rev. Liz Theoharis, co-chair of the Poor People's Campaign, described the idea as a "regression back to the tired debate of deserving and undeserving poor."

She noted some Republicans have justified work requirements in other contexts by invoking a New Testament Scripture passage, 2 Thessalonians 3:10, which reads: "Anyone unwilling to work should not eat." She insisted the passage, when taken in context, "does not blame the poor for moral failures that lead to poverty, nor does it suggest that work requirements should be attached to social programs."

She added: "There is a moral critique, there is a constitutional critique, of the wealthy benefiting off the work of others, and other ways that the rich punish and oppress the poor."