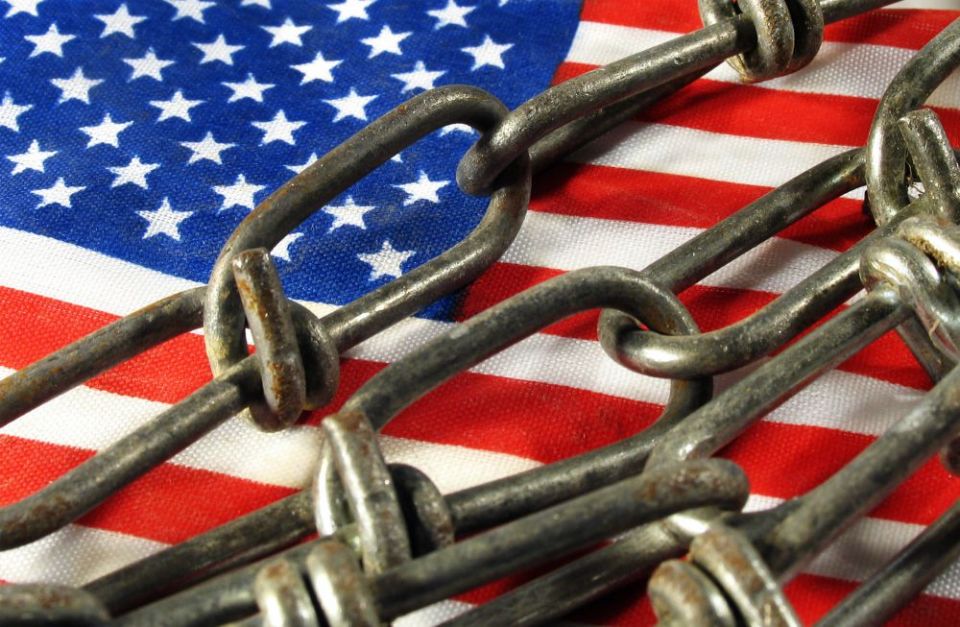 Wednesday, I began a review of Nancy MacLean's book, Democracy in Chains: The Deep History of the Radical Right's Stealth Plan for America. Today I shall conclude the review.

James Buchanan's public choice theory evidenced a core hostility to government interference in the economy, but it was just a theory, and Buchanan wanted to change the political landscape. He gathered some like-minded libertarians at his log cabin in the Virginia mountains in 1973 and told them they needed to "create, support, and activate an effective counterintelligentsia." He also instructed his friends that "conspiratorial secrecy is at all times essential." Later that year, he told a Richmond audience that he detected evidence that taxpayers were tired of the "oppression" of being forced to pay for government programs to "support unproductive and essentially parasitic members of society." The quotes are his, not MacLean's.

With support from his deep-pocketed friends, Buchanan joined with Edwin Meese, who would later serve as U.S. attorney general under President Reagan, and the two established the Institute for Contemporary Studies in 1972. Their goal was to connect libertarian scholars with politicians and businessmen. They hired journalists to render technical economic papers into the kind of language that could be used in the media. They trained businessmen to repeat libertarian talking points. They received funding from a host of blue chip firms such as Exxon, Mobil, Ford, U.E. Steel and others.

Another project was coordinated with the Law and Economics Center at the University of Miami where Henry Manne tried to shape the law in a more business-friendly direction. Manne had written that insider trading was good for the economy, and he praised hostile takeovers as a means for investors to exert control over management. Manne, like Buchanan, did not seek "retail" change: He aimed at a "wholesale" transformation of the legal profession. Through his two-week seminars, paid for by wealthy donors, his influence grew. Manne targeted "the aspiring presidents of a string of lesser schools to let him re-create their programs in his image," and soon many law schools aimed "to make the protection and enhancement of corporate profits and private wealth the cornerstone of the legal system." Along the way, Manne and Buchanan collaborated closely with two future Supreme Court justices, Anthony Kennedy and Lewis Powell. "In no other area was the process of strategic investment [by right-wing funders] as prolonged, ambitious, complicated and successful as the law," observed political scientist Steven Teles. 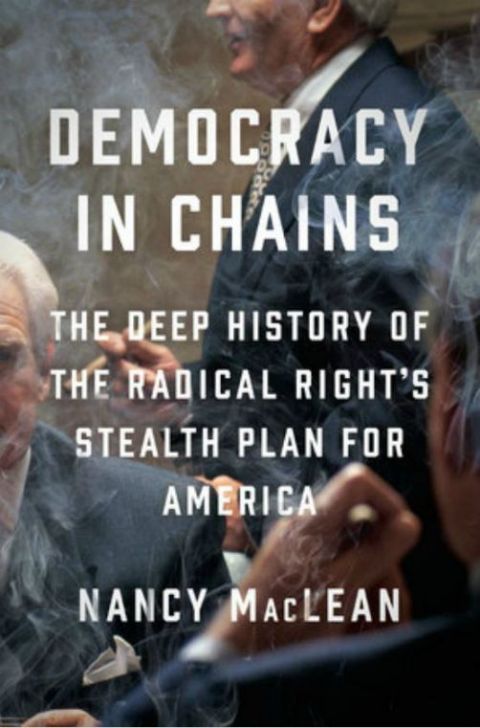 DEMOCRACY IN CHAINS by Nancy MacLean, published by Viking, 368 pages, $28

If you attend a Napa Institute event, or a lecture at the Cato Institute, someone is bound to point to Chile as an example of the kind of economic reforms they propose. I always thought it as a quirk. As MacLean demonstrates, the result of the radical libertarian changes to the economy were less successful than touted, but she also explains how Buchanan went to Chile to help the Pinochet dictatorship craft a constitution that would enshrine property rights, limit labor rights, and guarantee that political power would disproportionately remain in the hands of corporate and military titans.

This latter need to write a constitution for Chile that would limit the power of the masses and protect that of the wealthy helped stir Buchanan to keep going. In the U.S., he kept coming up against a singular problem: The policies he found so diabolical, the road signs along the road to serfdom, things like Social Security and labor laws and, later, Medicaid and Medicare, these policies were wildly popular. And so Buchanan realized it was not enough to aim at changing policies. If long-term change was to come to America of the kind he and his libertarian friends wanted, they would need to change the rules of political engagement. That is the morally neutral way of stating the challenge they faced. It could be also stated, truthfully, in a less neutral way: In order to secure property rights above all other social objectives, the libertarians needed to find a way to subvert democracy.

Charles Koch also looked back at his years of investment in the libertarian cause with mixed feelings. "He made clear he was looking for something, but what that something was, beyond a 'technology' of revolution, remained unclear," MacLean writes. When and where he found it is not: in the ideas of James Buchanan. In the eventual merger of Koch's money and managerial talent and the Buchanan team's decades of work monomaniacally identifying how the populace became more powerful than the propertied, a fifth column movement would come into being, the likes of which no nation has ever seen."

Koch had joined the Mont Pelerin society in 1970, and from the work of Ludwig von Mises, "Koch had learned that entrepreneurs were the unsung geniuses of human history, deserving of a kind of reverence reminiscent of the old Puritan doctrine that equated earthly success with divine favor." Koch was also enamored of idea of "creative destruction" and argued that any businessman who was unsuccessful "should be a janitor or a worker." So much for the dignity of work? One wonders whom he thought cleaned the office buildings he was funding!

Koch liked Buchanan's radicalism: The billionaire had soured on Milton Friedman and Alan Greenspan, calling them "sellouts to the system" because they mistakenly tried "to make government work more efficiently when the true libertarian should be tearing it out at the root." Buchanan and Murray Rothbard were present at the creation of Koch's Cato Institute in 1977, and the organization would become the flagship Washington think tank for the cause. Buchanan moved to George Mason University just across the Potomac from Washington, and supplied a steady stream of new, young talent to Cato as well as to congressional offices and GOP administrations.

In a memo outlining the goals of the Cato Institute, Rothbard sought to distance the cause from the Republican establishment. To him, conservatism as practiced in the U.S. at this time "embodied the death throes of an ineluctably moribund, fundamentalist, rural, small-town white Anglo-Saxon America." The memo "quoted so liberally from Lenin and so avidly scoured previous revolutions and authoritarian regimes for methods that it was deemed too 'hot' for release beyond the inner circle."

MacLean sums up the work Koch, Buchanan and Rothbard set for themselves: "The mission of the cadre was, quite literally, revolutionary, although a cause with so much money would not need violence. 'The ruling class' to be overthrown consisted of the leaders of labor unions, those corporations and business associations that continued to seek special benefits through lobbying, and the intellectuals who supported government action." Buchanan supplied much of the analysis used by the team at Cato as they generated "nonstop propaganda," and 'all of this held together by the gravy train opportunities Koch's money made available as they pushed their case into the media and public life." 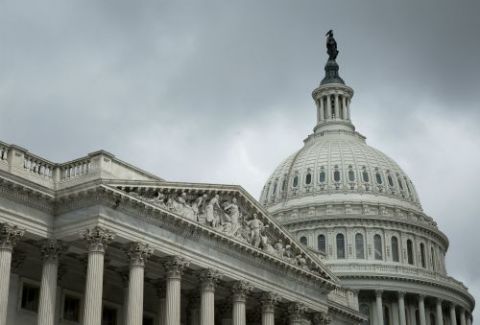 The extent of the alliance between Buchanan's mind and Koch's money takes several chapters to tell. I do not want to give the whole story away — I want you to buy the book, read it, and share it with a friend. But if you think this is just all so much interesting, albeit scary, history, think again. Think of the crisis in Flint, Michigan, a direct outgrowth of the Koch-funded Mackinac Center, which first began the push for state-appointed city managers with no accountability to the electorate. Think of the disinformation campaign about climate change and its success: "The number of Americans who believed that 'continued burning of fossil fuels would alter the climate' dropped from 71 percent in 2007 to 44 percent in 2011." Think of the efforts to suppress voter participation that have created a fake issue — voter fraud — to justify restrictions on the franchise that disproportionately harm the poor. Through the American Legislative Exchange Council and the State Policy Network, both funded by Koch, the radical vision of a polity organized not around shared rights of citizenry but around property rights made sacrosanct is being implemented from Wisconsin to North Carolina. And their special focus on races for judgeships may be the least noticed, but most consequential, direct involvement in electoral politics.

As I noted at the beginning, this book is not the work of a conspiracy theorist. MacLean is a professor of history at one of the nation's leading universities who happened to discover a treasure trove of previously unexamined primary source material in Buchanan's old office. She notes that nothing was archived: It was all just lying about, and so she started going through the material in the office counter-clockwise! The picture that emerges from these primary sources is shocking and frightening. I had long harbored suspicions of the Koch brothers because their involvement in our political life strikes me as nefarious. But to realize the degree to which their ideology was intertwined with Jim Crow at its start, their commitment to radical, uncompromising positions, and especially their awareness that to achieve their goals they would need to subvert democracy and were only too willing to do so, this was all new to me and it left me terribly afraid for our country.

Charles Koch is currently being feted at the Catholic University of America during a three day conference organized around his book Good Profit. I found that conference disturbing before I read MacLean's book. After reading it, that conference is more than disturbing; it is scandalous.

The mystery and beauty of God's mother

For the sake of unity, compromise