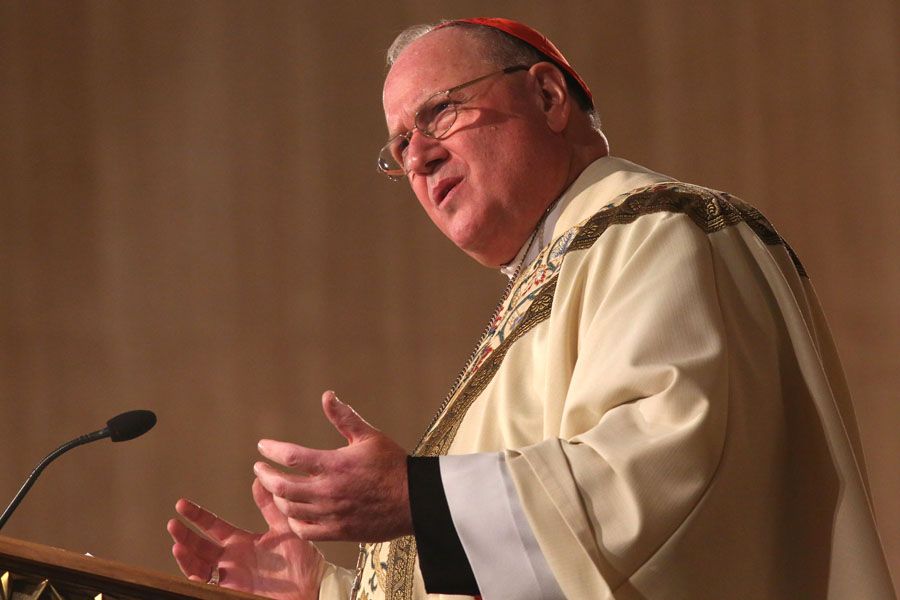 New York Cardinal Timothy M. Dolan, chairman of the U.S. bishops' Committee on Pro-Life Activities, delivers the homily during the opening Mass of the 2017 National Prayer Vigil for Life at the Basilica of the National Shrine of the Immaculate Conception in Washington. (CNS/Bob Roller)

Cardinal Timothy Dolan published an ill-advised op-ed in, of all places, The Wall Street Journal last week. The cardinal symbolically shed his miter, a symbol of his teaching authority, and donned the cap of a political pundit and regrettably did so in op-ed pages known for their partisanship.

Funny thing is that I have been making the same point the cardinal does, that the Democratic Party seems intent on sticking its finger in the eye of Catholics, but I am a pundit writing for a left-leaning media outlet. Dolan was preaching to the choir, but he has a choir at St. Patrick's to preach to, and should have left it at that.

The cardinal begins by recalling his predecessor Archbishop "Dagger John" Hughes. Dolan writes, "An immigrant himself, Hughes prophetically and vigorously defended their dignity. Because the schools at the time were hostile to these immigrants, he initiated Catholic schools to provide children with a good education sensitive to their religion and to prepare them as responsible, patriotic citizens. The schools worked. Many remain open to this day, their mission unchanged." Nothing to object to there, although today our Catholic schools serve many poor non-Catholic children as well as affluent suburban Catholic students, neither of which was the case in Hughes' day.

The point of this trip down history lane becomes clear, and clearly partisan, later in the article. The cardinal bemoans the fact that Democrats oppose tuition tax credits to help fund Catholic schools. "In recent years, some Democrats in the New York state Assembly repeatedly blocked education tax credit legislation, which would have helped middle-class and low-income families make the choice to select Catholic or other nonpublic schools for their children," Dolan writes. "Opposing the bill reduces the ability of fine Catholic schools across the state to continue their mission of serving the poor, many of them immigrants." Again, this is all true. But, it is also only one-half of the story.

Dolan might have begun his historical tale with these words: "An immigrant himself, Hughes prophetically and vigorously defended their dignity. He made the forces of nativism know there was a price to pay for their xenophobia, that the Catholic Church intended to stand by its immigrant population so that if the bigots wanted to get to them, they had to go through the archbishop of New York to do so." Again, true but leading to a different contemporary analogy, no?

Just as it is true to blame the Democrats for opposing aid to Catholic schools, the cardinal might have chastised the Republicans for their re-embrace of nativism. He might have written, "In recent years, some Republicans — including prominent Catholics like Speaker of the House Paul Ryan — have turned their back on those immigrants, mostly poor people, who are consigned to live in the shadows because they lack proper documentation. Indeed, in a perversion of Catholic values, many members of the GOP wish to end the preferences for family reunification in our immigration laws. These Catholic Republicans, all of whom are themselves descendants of immigrants, should be mindful of their duty to bring the Gospel into the public square, a Gospel that calls for protecting the migrant and the refugee."

The cardinal then turned to another recent occurrence that he uses to ground an attack on the Democratic Party. "The second event was the recent funeral of a great African-American woman, Dolores Grier. A convert to Catholicism, she was named vice chancellor of the archdiocese three decades ago by Cardinal John O'Connor; she was the first layperson and first woman to hold the prestigious position," Dolan writes. "Grier was passionate about civil rights, especially the right to life of babies in the womb. She never missed an opportunity to defend, lovingly but forcefully, their right to life."

He then, rightly, criticizes the Democrats in Albany who support a law that would not require medical attention to a child born alive during an abortion procedure. Again, the cardinal is correct that this proposal represents a new low in barbaric treatment of the most innocent and vulnerable human beings, and makes a mockery of the Democratic Party's claim to be worry about the marginalized and the voiceless.

But, Cardinal Dolan could have said of Dolores Grier, that she was a young black woman during the Civil Rights movement, excluded from societal participation in countless ways, yet who lived to see an African-American in the White House. She knew throughout her life that the Catholic Church stood with her as a black woman seeking full participation in the face of both racist animus and sexism.

The cardinal could have written: "How shocking it was that in her later years, Dolores Grier had to watch a president of the United States make excuses for white supremacists when he was not fending off accusation of serial misogyny. How depressing to realize that the party that had long championed the rights of the unborn* refused to stand up to the leader of their own party when he repeatedly and gratuitously picked fights with black men and women, from football players to members of Congress. How appalling that so many fellow Catholics made common cause with politicians who trafficked in racial animus whenever their poll numbers flagged."

If evangelical Protestant clergy wish to morph themselves into political partisans, that is their business. But, Catholic clergy are well advised to go out of their way to make sure their political statements and other forms of involvement are aggressively nonpartisan or, at least, bipartisan. The polarization within the Catholic community is almost entirely a result of political divisions overwhelming religious bonds, and it is a part of the ministry of a bishop to strengthen the bonds of unity, not to attenuate them. Cardinal Dolan himself exercised this kind of balance brilliantly during the last two Al Smith dinners at which he has presided. I understand his frustrations with the Democrats, to be sure, but this op-ed in the Journal was deeply regrettable and he should set the record straight at his earliest opportunity.

*An earlier version of this column mistakenly used "born" instead of "unborn."