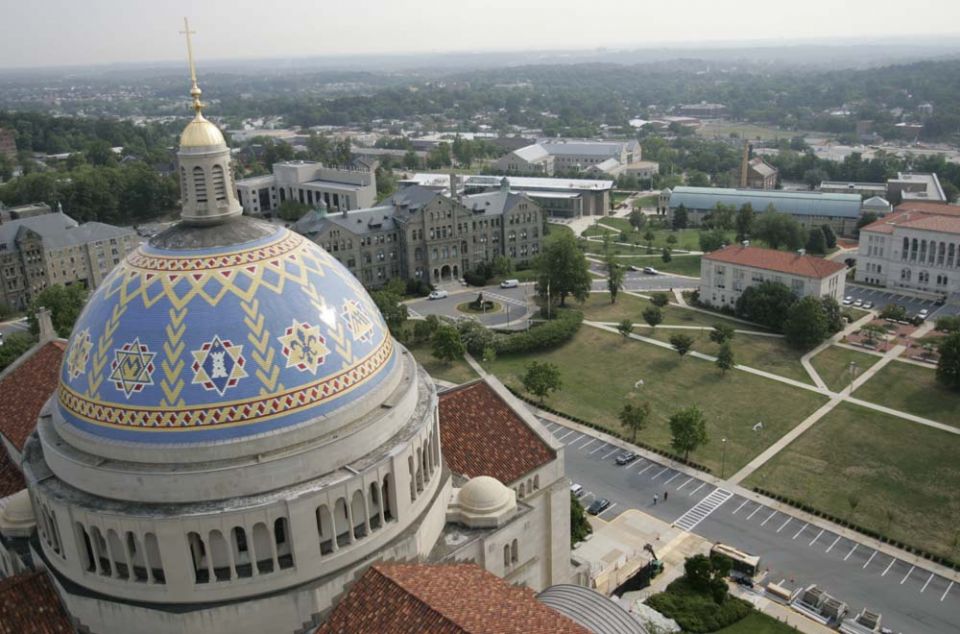 At The Washington Post, the CEO of AT&T, Randall Stephenson, says it was “a big mistake” to hire Trump’s personal attorney Michael Cohen. Really? You don’t say! I wonder if he thought it was a mistake, or merely an investment that did not pan out, before it was brought to light? If you are not already suspicious of capitalism, you only have to pay attention to its leading practitioners to become thoroughly disgusted.

At Commonweal, Julia Young writes passionately about the proposed changes at the Catholic University of America, and how the university, which has been a part of her life throughout her life, is in danger of losing so much of what made it special. I think there is more to the story and it revolves around a sinister effort to introduce libertarian ideology into the heart of Catholic social doctrine via Catholic University’s business school. I will have more on that in the weeks ahead.

It is that time of year when all my friends with kids are fretting the decision about which college their children will choose to attend. At the blog Working-Class Perspectives, Allison Hurst criticizes the college rankings put out by U.S. News & World Report and other similar schemes because of the many things they do not take into account, like how much debt one emerges with, and the nasty effects these rankings can have, such as encouraging schools not to take low-income students. She also shares a model she developed to evaluate colleges that takes into account these other factors. Hurst’s most important statement however is this: “Rankings reinforce a competitive urge — among both students and institutions — that is unhealthy, to say the least.” How welcome to see someone question the value of competition. In America no less!

At RealClearPolitics, Peter Berkowitz on the Arab-Israeli conflict and Yossi Klein Halevi’s new book, attempting to start the kind of realistic conversation without which there will never be peace. He contrasts a recent op-ed by Halevi with an op-ed in The New York Times by Ayman Odeh, an Arab member of the Israeli parliament, who does nothing more than repeat the same tired formulas that have kept the Palestinians from seizing the opportunities for peace that have come their way.

The anniversary of Humanae Vitae invites a most unpleasant return to the first battles in what later became known as the culture wars. In due time, I will offer some commentary but it is important to remember that Catholics should not reduce the encyclical to the soundbite “Pope bans pill.” We most surely should remember the degree to which the birth control movement was, pardon the expression, conceived as part of a eugenic program that had a fine reputation in liberal circles until Josef Mengele gave eugenics a bad name. But, according to this report by Erin Blakemore, the eugenic itch was not totally abandoned with the end of World War II: Women in Puerto Rico were used as unwitting guinea pigs in the 1950s to test early versions of the birth control pill.

At The Washington Post, conservative foreign policy expert Max Boot asks if he is suffering from “Trump Derangement Syndrome?” Boot, for example, supported the nomination of John Bolton as U.N. ambassador in 2005 but opposed his becoming National Security Adviser this year. Still he is absolutely correct when he writes, “Knowing what I do of Trump’s character, I find it impossible to judge his decisions in a vacuum as if they were being spit out of a computer.” We need to keep that in mind as we all hope the president succeeds in his negotiations with the North Koreans. If Trump’s megalomania makes him uniquely able to strike a deal with the likes of Kim Jong Un, great, but he is still a megalomaniac.

Finally, a Happy Feast of St. Dymphna to you all. Her story is one of the strangest among the many strange stories of our saints: Her pagan father wanted to marry her, after her mother died and she was the only woman in Ireland as beautiful as her mother, so she fled with her priest, Fr. Gerebernus, to the continent. Her father tracked them down, tracing the foreign money they were spending (which still works for tracking people down — ask Bob Mueller!) and his soldiers killed the priest and her father beheaded Dymphna in the town of Geel, Belgium, which I had the pleasure of visiting many years ago. The good work still done in her name treating people with mental illness is a testament to the faith of generations of Christians.

What our parish does about contraception and family planning