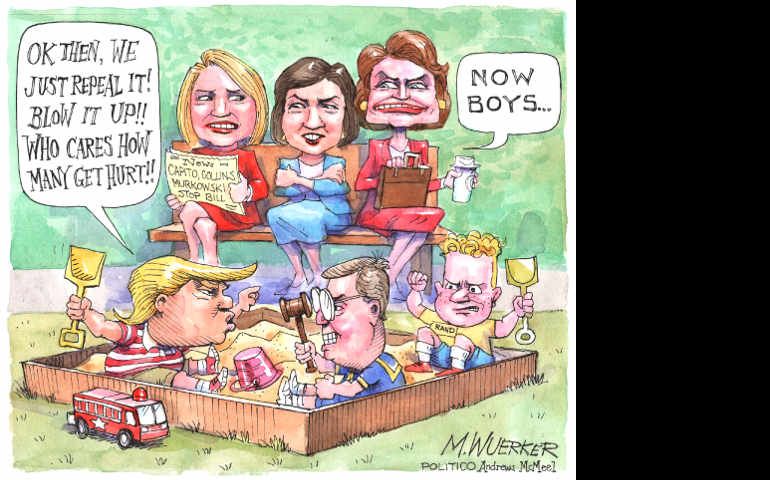 The much-heralded attempt by congressional Republicans to undo the 2010 health insurance law known as the Affordable Care Act hit a formidable wall in the Senate July 18 and may not recover. First, four GOP senators said they could not support even bringing to debate the latest legislation to "repeal and replace" Barack Obama's signature accomplishment. So, Senate Majority Leader Mitch McConnell of Kentucky, following guidance from President Donald Trump, opted to try a bill that would repeal the law now, giving senators two years to figure out the "replace" part of their promise to voters. But three Republican women — Lisa Murkowski of Alaska, Shelley Moore Capito of West Virginia and Susan Collins of Maine — quickly announced they would not vote for such a measure.

"I did not come to Washington to hurt people," Capito said in a statement.

Trump's reaction was to "let Obamacare fail." Rep. Nancy Pelosi, the House minority leader, extended a "hand of friendship" to Speaker Paul Ryan in an effort to address rising costs and expand coverage under the law. While she didn't do it publicly, one could imagine Pelosi and fellow Democrats — especially those who walked the current law into existence — cheering the end, for now, of "repeal and replace."

That would be a mistake. Yes, the effort to change the law, and especially to cut Medicaid benefits for millions of Americans, has fizzled. But there are millions of others who never had a chance at coverage under the law, and still won't. And there are those who receive health care insurance through their employers who, year after year, see any pay raises nullified by increases in premiums and, just as devastating, high-deductible plans that mean they will have to pay thousands of dollars in health care costs before they can begin to see the benefits of coverage.

Under the original Affordable Care Act, the income qualification for obtaining Medicaid was expanded to 138 percent of the federal poverty limit. Nationwide expansion of Medicaid was a key component of the law, but the Supreme Court, in its 2012 decision to uphold the health care act, ruled that states could opt out of the expansion. Nineteen states, led by Republican governors or legislatures, did just that.

That created a coverage gap, a gap that hits Americans making very little money. According to the Department of Health and Human Services, 138 percent of the federal poverty limit would equal annual income of just more than $28,000 for a family of three. But in those states that did not expand the benefit, the income limit for that family would be closer to $9,000.

Moreover, in those states that did not expand coverage under Medicaid, childless adults of any income — or no income — are not eligible to apply.

The writers of the law expected everyone making at or below 138 percent of poverty to receive Medicaid benefits, so residents of those 19 states are not eligible for federal subsidies if they want to buy coverage through the insurance marketplaces set up through the Affordable Care Act. Thus, we have the coverage gap. Kaiser Family Foundation, which tracks and analyzes health care data, estimated last fall that 2.5 million adults fall into that gap.

Another problem that seems to be unworthy of attention is that insurers are starting to pull out of markets where participation rates are low. Again according to Kaiser Family Foundation, 38 counties in Nevada, Indiana and Ohio are at risk of having no plans offered under the Affordable Care Act in the upcoming coverage year. That affects about 24,000 people. That may not seem like many, but more are sure to follow if markets aren't stabilized.

The point is that the situation remains untenable. The nation's poor are especially at risk, but all Americans who depend on health insurance face many unknowns. Pelosi's letter to Ryan smacks of politics, but Democrats and Republicans must find a way to ensure that all Americans have access to affordable basic health care.

In their visits home this spring and summer, Republican legislators have felt pressure from constituents to walk away from their leader's bill. The public outcry has worked to keep this legislation from becoming law.

But convincing your Democrat and Republican representatives in Washington to work together to stabilize the markets, close the coverage gap and address the rising costs of health care, or to design a single-payer system that works, is not as likely.

The better fight, at this point at least, is at the state level, especially in those states that did not expand Medicaid. Camp out at your state capitols and your local legislator's office. Make it clear that the status quo — while still better than the effort to crush Medicaid — is not good enough.

We urge you to keep up the fight. For that family of three, for that single, childless and poor man, for the residents of those 38 counties — and for the many more who still could lose coverage. Equal access to basic health care — it's the only just answer.