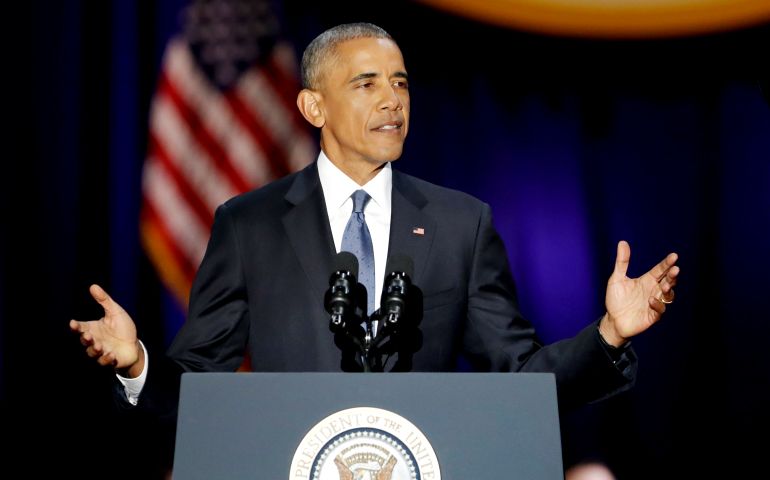 It is said, seemingly of every act and utterance of President Barack Hussein Obama in recent months, that he is trying to secure his legacy. The suggestion is not only foolish, it also yearns for the impossible. One doesn't secure one's legacy in the moment. A legacy rolls out over time and is secured only at a distance.

The current moment is too dimly lit, the sightlines too cluttered with the fallout of political ambition, unfulfilled hopes and the jagged debris of Donald Trump's victory, to permit authoritative assessments of the past eight years. While the legacy thing will take some time to come to maturity, it is not too early to conclude that Obama's eight years as president will be a major chapter in presidential history.

Even amid the chaos of the recent transition and the effects of the national whiplash experienced in the switch from Obama to Trump, markers exist that won't be altered by time, attesting to the significance of Obama's tenure.

Obama will stand out for some time because, as he has so often put it, "a black man with a funny name" was twice elected president in a country where a ghastly civil war had been waged over race and where violence and assassination were the tools for dealing with so many black leaders and activists.

As the first African-American to make it to the White House, he occupies a unique spot in presidential lineage. He and his wife, Michelle, and their two daughters exhibited an exemplary model of family life, and his administration was remarkably free of scandal. The significance of his two terms goes far deeper and wider than race.

He inherited a nightmare in 2009. Two open-ended and largely unnecessary wars were raging; the economy was tanking; the tea party, embryonic at the time, was in development and would eventually give voice to the most extreme antigovernment elements in modern politics; the Middle East, always volatile, was being further destabilized by the war on terrorism; and Republicans boldly let it be known that their prime motive for the duration of Obama's tenure would be to make sure he didn't succeed. Less than two years into Obama's first term, Senate Republican leader Mitch McConnell declared: "The single most important thing we want to achieve is for President Obama to be a one-term president."

Despite that opposition, the record over two terms is impressive:

While it's difficult to draw a straight line from Obama's policies to all of those data points, it's not a stretch to say Obama rescued the economy, the auto industry and pushed through health care reform that had eluded every president since Harry Truman. But he paid a high price for those successes in increased rancor and division inside Washington and across the country.

Many have judged him to be a lousy politician, in the sense that he was never able to make the kind of collegial connection with many of his adversaries that more successful presidents have mastered. He admits of late that he and his administration were inadequate at telling the story of their accomplishments and persuading the populace at large of the benefits of his initiatives. It was an odd failure for a leader who could electrify thousands with soaring themes of hope and aspiration.

While he can be credited with winding down the wars in Iraq and Afghanistan, history is likely to judge harshly his lack of resolve and action in Syria, where the slaughter of civilians went on unabated for years. He will be credited with hunting down and killing Osama bin Laden, but his administration will also bear the burden of the growth of the Islamic State movement and its hideous brand of terrorist warfare, as well as the growth of a war without national boundaries or rational rules of engagement.

And who knows the ultimate consequences of the growth of drone warfare, where unmanned bombers intrude on the space of sovereign states with whom we are not at war to pick off individual targets.

In the end, he moves off the main stage of a world deeply divided, with tensions on the rise, and no clear strategy for dealing with the new brand of warfare.

Our immediate judgments will moderate over time as more of the hidden tensions and forces with which Obama had to contend surface. For the moment, he leaves with high approval ratings and the potential for filling a quite influential role in the future.

The immediate value of his tenure is placed in stark relief because of the moment we have lived through on the way to the Trump presidency. The grace, dignity and intelligence that Obama brought to the office, the restraint he displayed despite the blatant and hateful insults he and his wife endured and despite the persistent questioning of his legitimacy, are testaments to character traits we know are not naturally bestowed as the result of an election.

He is a good and decent man. He was an honorable president.

When will Donald Trump decide to be president?