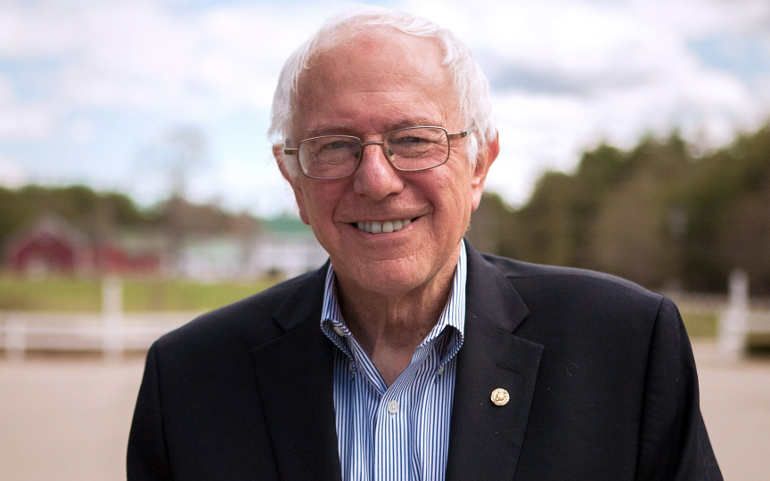 But the figure attendees seemed most excited to hear was Sen. Bernie Sanders, who on Saturday (Aug. 31) along with former U.S. Housing and Urban Development Secretary Julián Castro became the first presidential candidates to address the country's biggest gathering of Muslims.

Both Castro and Sanders underscored the need to forge progressive coalitions and build solidarity between communities if any Democratic candidate hopes to defeat President Trump in 2020.

"I am here today because I believe in the concept of solidarity, and the need for all of us, no matter where we come from or what our background is, to stand together in the struggle for justice and human rights," Sanders told the approximately 6,000 attendees at the forum.

While Sanders repeatedly mentioned his father, a Jewish refugee who fled anti-Semitism and poverty in Poland, Castro avoided invoking his  Catholic faith and instead leaned on his status as a second-generation Latino immigrant.

Held in the George R. Brown Convention Center, just miles from where the next Democratic debates will take place on Sept. 12, the forum was organized by ISNA, the Muslim activist group Emgage USA and the Muslim Public Affairs Council. Outside, attendees were greeted by armed anti-Muslim protesters.

The forum began with the Arabic word "bismillah" — an invocation of God's name — as well as a recitation of a verse from Surah Ar-R'ad, the 13th chapter of the Quran, that serves as a central theme for the conference: "Indeed Allah will not change the condition of a people until they change what is in themselves."

Noting the deadly mass shooting that happened just minutes before elsewhere in Texas, organizers also urged attendees to engage in heartfelt prayer for the improvement of America's condition.

Sanders' remarks, carefully tailored for his audience to include discussions of health care and hate crimes, mass shootings and Middle East interventions, received a standing ovation, thunderous applause and chants of "Bernie!"

Sanders reminded his audience of the thousands of non-Muslims who rushed to airports to protest the travel ban and "stand in solidarity with Muslims," and to how Americans have responded to the Trump administration by voting Muslims into Congress and state governments across the U.S.

"What that tells me is that the American people understand that that country is at our best when we stand together, regardless of our religious or spiritual beliefs," he said. "The truth is that if we are going to be successful in confronting senseless violence, we must come together and not demonize one another."

The Vermont senator issued strong condemnations of Israel's "occupation" of Palestinian areas, China's mass internment and "abuse" of Uighur Muslims, and U.S. involvement in a "horrific" civil war in Yemen, where he said a Saudi-Iranian conflict has produced the "worst humanitarian catastrophe in the world today."

While both candidates said they do not support the Boycott, Divestment, Sanctions movement against Israel, they condemned laws restricting other Americans' right to support the movement.

Both candidates affirmed that they would pursue a two-state solution to the Israel-Palestinian crisis, end the travel ban that the Trump administration has ordered against Muslim-majority countries, rebuild the United States' gutted refugee resettlement program and reinvest in programs to prevent domestic terrorism and white supremacist violence.

Castro told the audience: "You are full partners in American progress. Too often in our country's history the message to the Muslim American community has been that somehow you're the enemy, or you're the problem."

That same spirit of "respect and humility" must carry over to foreign policy, he added.

"When the history of the 21st century is written, I hope historians will look back and say the United States worked with Muslim-majority countries to create a global peace that everybody could be proud of," Castro said.

But Sanders has done more than any current candidate to win the hearts of the convention audience, even before he took the stage.

Of the 2020 candidates, Sanders has been the most vocal critic of Israel's treatment of Palestinians. He also helped pass a bill to end American involvement in Yemen's deadly civil war and was quick to defend Muslim congresswoman Rep. Ilhan Omar when fellow Democrats accused her of anti-Semitism.

The Sanders campaign is also run by Faiz Shakir, the first Muslim to ever manage a major presidential campaign.

Shakir, who joined Sanders at the forum, told Religion News Service in an interview that the candidate's outreach to Muslims is "consistent with his larger ecumenical approach." He pointed to Sanders' meeting with the rabbi of Pittsburgh's Tree of Life synagogue as well as his visits to various churches.

Earlier this summer, the senator sent a video of his remarks to the Muslim Collective for Equitable Democracy conference, billed as the first national gathering of Muslim Americans in politics. In April, he became the highest-ranking U.S. official and first presidential candidate to visit a mosque after the New Zealand mosque shooting. He also participated in an interfaith roundtable event at Washington, D.C.'s historic Masjid Muhammad back in 2015. And during his previous presidential run, he specifically reached out to Muslim and Arab American voters.

Attendees' reaction to Castro, who has not been involved in any other major Muslim-focused campaigning, was more muted. Much of the audience had dispersed by the time his Q&A session began.

"American Muslims play a critical role in shaping our nation's culture, economy and political process," Castro's deputy press secretary Liza Acevedo told RNS. "At a time when our president continually scapegoats and vilifies the Islamic faith for political gain, candidates should show up and speak directly to these communities about their plans to support them in the years ahead."

Muslims who attended the forum said they were struck by the breadth of issues both candidates addressed, weaving between Middle East policy and Medicare.

"Muslims in the U.S. are not a one-issue bloc," said Kalia Abiade, of the Pillars Fund, a Muslim community foundation. "From health care to climate change to student debt and foreign policy, it was encouraging to hear presidential candidates at tonight's forum raise critical issues that matter to so many of us."

"Politicians in the United States often speak about Muslims, rather than to them," said Sajida Jalalzai, who teaches religion at Trinity University in San Antonio. "To have Sanders and Castro attend a national conference hosted by Muslims and for Muslims, and to speak openly and sincerely about issues that matter to Muslims … signifies that the candidates view Muslims as a legitimate part of this country, that they take seriously our concerns."

For some attendees, however, the fact that just two of the 10 candidates invited chose to attend was a greater comment on how Democratic politicians regard ISNA's constituency.

"Our community is paying attention to how politicians engage with us, and is differentiating between those who say that they stand for religious freedom, and those who back it up with actions," said Emgage CEO and Obama State Department official Wa'el Alzayat, who moderated the ISNA forum. "Attending this event and speaking directly to our community in these critical times is a perfect example of the latter."

"t's an error to ignore the community, especially when there is relative consensus on a number of important policy issues and huge intersectional overlaps with other demographics," Kennedy said.

For some, candidates' dismissal of the forum echoed the Democratic Party's historic snubs of Muslim voters. Hillary Clinton returned campaign donations from Muslim civic organizations during her 2000 Senate race, and during Barack Obama's 2008 campaign, his staffers pulled two hijab-wearing women from behind a podium as he spoke so they would not be visible to cameras.

This year, given "Trump's blatant Islamophobia," Kennedy said, candidates may find that engaging with Muslim communities will draw support from voters on the left.

At the forum, organizers also announced the launch of a partnership with the U.S. Census Bureau to encourage Muslim participation in the 2020 national census. Census officials emphasized that data collection is important for allocating the government's resources and that none of the information collected will be shared with law enforcement.

"No matter who is elected in 2020, our work does not end on Election Day," Abiade said. "Muslim communities in the U.S. have to do the hard work of holding accountable the elected leaders who count on us during their campaigns."